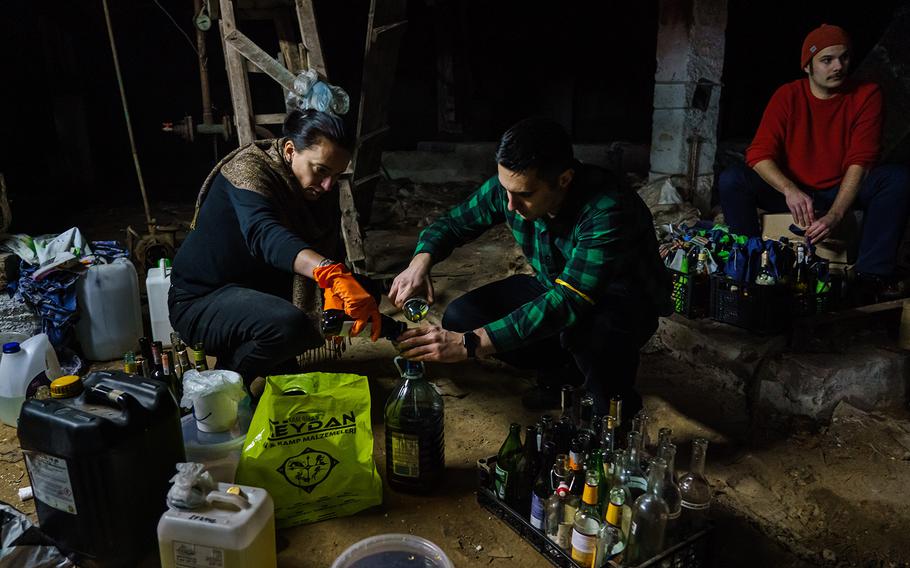 UKRAINE (Tribune News Service) -- More than 4.6 million people have fled Ukraine since Russia invaded on Feb. 24, sparking the largest refugee crisis in Europe since World War II. They have traveled on buses and trains, folded their dearest possessions into suitcases. They have crossed into foreign lands, their futures unknown.

But millions more have stayed to help defend their country. Some have taken up arms, but others are helping in different ways.

There is the teacher who now peels potatoes in a soup kitchen. The DJ manning emergency call lines who says she keeps “a small room in my brain” to hold all the pain she has heard. There are psychologists trying to help people process trauma in real time and students risking their lives to spirit supplies to soldiers on the front lines.

Russia’s relentless assault — now targeting the south and east with daily barrages — has transformed everyday Ukrainians. Here are some of their stories. These interviews have been edited and condensed.

I had been studying at Ohio University for six months when the war happened. My girlfriend and I decided to come back to Ukraine. It was a really impulsive decision. When your mom is in a city being bombed by Russians, you can’t make a rational decision. I was terrified when I crossed the border from Poland. I understood that there was no turning back for me, because as a man, I can’t leave the country now. I’m locked in. But I’m OK with that.

When I decided to come back, my friends from Ohio gave me medical supplies, which I delivered to my friends in the Territorial Defense Forces in Kyiv. I found that our soldiers were not at all prepared. Many didn’t have proper clothes or helmets or medical kits. So I decided to help. Every day I try to find the needed supplies in Europe or the USA and then I deliver it to the frontline. We give first aid kits, tourniquets, things to help save lives. I know that we will win this war. We have already won this war actually, mentally and culturally. But I just don’t want more people to die.

Three weeks ago, my friends, some volunteers who were delivering some of our stuff, were driving to Chernihiv when they were bombed by missiles. They died.

I’m just worried that I’m gonna have, like, some consequences mentally after this. I might have to go to a therapist or something.

It’s a lot of stress, because you have all this news about the war, you have air raid sirens, sometimes you hear friends have died. It’s just really overwhelming.

Before the war, I was a DJ at fashion events. I traveled a lot. I went to restaurants with my friends.

Now I’m helping in the national call center, trying to help people find their missing relatives. These are soldiers or civilians who have gone missing or were captured or killed in the war.

Every day I hear horror stories. If you saw what happened in Bucha, where a lot of people were killed by Russian soldiers, these are the type of stories I hear.

There was one woman who called and asked somebody to bring the body of her son from Irpin, which is really close to Bucha. In the first days of occupation, Russian soldiers killed her son. She had to leave him in the bathroom, in the bath. She called to try to get his body so she could bury him. She didn’t cry. She spoke with the voice of a person who has nothing in her life anymore. She was so cold. Her voice was so cold. She spoke like a robot. This was not the worst horror story I’ve heard. But I remember her voice.

My brother volunteered with the territorial defense. He can’t tell me where he is. I saw him just once since the beginning of the war. I came to him and gave him a lot of cigarettes for all the guys with him. And a lot of chocolates, because in such situations you always want to eat something sweet.

On the first day of the war, we woke up to explosions. My husband and I set out in our car for the west. We drove for two hours, but we ended up coming back to Kyiv because we realized that we couldn’t leave. If we were in some other less-dangerous city, we would think all the time about how we left our family in Kyiv and we didn’t do anything to help.

We have a group of restaurants, and we’ve been donating food. We got a request to please go and deliver some supplies and food to Bucha shortly after the Russian soldiers left.

One of the guys, his dad was living there. We went to his house to meet him and they were just hugging. It was really touching. The dad introduced us to a neighbor who had been shot by the Russians. He had been leaving his house and was hit in the head, but the bullet came through his mouth and he survived. He said: “It’s fine. I’m totally fine. I’m alive.”

When the war started, all my students disappeared immediately. I just couldn’t think about teaching. No way. I felt so empty inside.

I started working as a volunteer three or four days after the war started. I realized that I couldn’t stay at home because I was nervous, I was frustrated, I was crying. I was scared about the future and I realized that the only way to lift myself was to have this feeling of being helpful. In the café where we cook food for people, I feel calm. I never hear the sounds of war and shelling because there is always music in our kitchen.

We feed about 500-600 people every day. We cook for soldiers, for policemen and for two hospitals. I can peel and cut potatoes now very quickly.

We relocated to Kyiv from Donetsk, in the east, in 2014 [after pro-Russia militants seized control of the region]. That was the first time I felt what it meant to be a refugee, to flee the place you lived, and it was horrible.

I was 55 that time. It’s not an age when you can easily start your life again.

This time when the war started, I decided not to go anywhere. You cannot flee every time. My relatives still live in the east [where Russian forces have concentrated their attacks in recent days]. My sister, her family, and my mom are there. My mom is 94. Mentally I’m very tired. I miss the feeling of being relaxed. It’s the feeling, you know, when you’re lying on the beach, watching the sea. In eight years I haven’t felt relaxed.

My eldest son is a volunteer. He takes supplies to the front line. He just took 300 safety vests plus I don’t know how many drones plus some ammunition and he drove with all this to the front line. He was in Kramatorsk a day before the big explosion at the railway station. My youngest son, he’s accompanying journalists. Absolutely I’m worried. But I know this is their choice. They want to do something for their country.

On the 24th of February, they bombed a military airport near my house in Odesa. It was 5 a.m. We thought: Is it fireworks? Who is having a birthday party at five o’clock in the morning? We looked through social media and understood that we were at war. We couldn’t believe it.

I’m a psychologist and I have an NGO that provides early intervention services for children with developmental delays. But during the war, a lot of the parents we work with lost their jobs and salaries. So we began providing humanitarian help. We bought diapers and food and other supplies and we deliver it to them every week.

We have seen very interesting things with the children. There is one boy who cannot talk, but he has learned how to imitate the air raid siren.

When we are talking to parents, of course we see a high level of anxiety. We organized a group meeting with parents online. It is very interesting because we tried to do something like that before the war and they never had time. But now I think they really need some emotional support. They want to tell their stories.

I have a husband and a son who is 14. Now my son is in western Ukraine with my sister. He has become very emotional. Before, if he spent time at his grandmother’s house, he might forget to call me, and phone once a week maybe. But now he’s calling me every day. And he is asking every day when I will come to him. He worries about me. He knows everything that’s going on from TikTok, and he knows the names and faces of all the ministers, the Congress and many presidents. Before he never was interested in politics, now he’s very into it.

I think we are all becoming stronger. I see it every day. I see mothers who I thought were fragile, but now they are so strong. One mother who has a child with autism spectrum disorder moved to Poland, and it was a very long and very hard trip, but now she is delivering humanitarian help from Poland to our soldiers in Odesa. Another mother, she’s helping take care of the dogs and animals that were left when people had to flee. I think that each person is finding himself.

It’s not easy, you know? You’ve got feelings you’ve never experienced before. Total uncertainty, a very firm anger about what is happening and a very horrible fear for your children — and an understanding that you can’t do anything to protect them.

But on the other hand, we’ve got this drive to help each other. You feel a lot of unity and a lot of warmth from the people around you.

I’ve been helping refugees and people in crisis since the war began in the east in 2014, and what I saw was those who help others recover better. So I try to be helpful as I can. We get some food and give it to old people. My NGO has published materials with pictograms explaining to children with mental disability, speech disability or autism how to behave when in a bomb shelter or being evacuated.

I’m also training with the national agency for emergencies. It’s like firefighters. They would like to make brigades though for immediate urgent reaction.

We do whatever we can, every you know, every old person, every farmer, every teacher, every medical person, every housewife is fighting in their own way.

My mom lives in the north of Ukraine, and it’s very difficult because bridges were ruined by Russian talks. And people have no water in their homes. I can’t enter the town, but some volunteers came to my mom and brought her food and money. It’s the same thing that I do here for people. ©2022 Los Angeles Times.