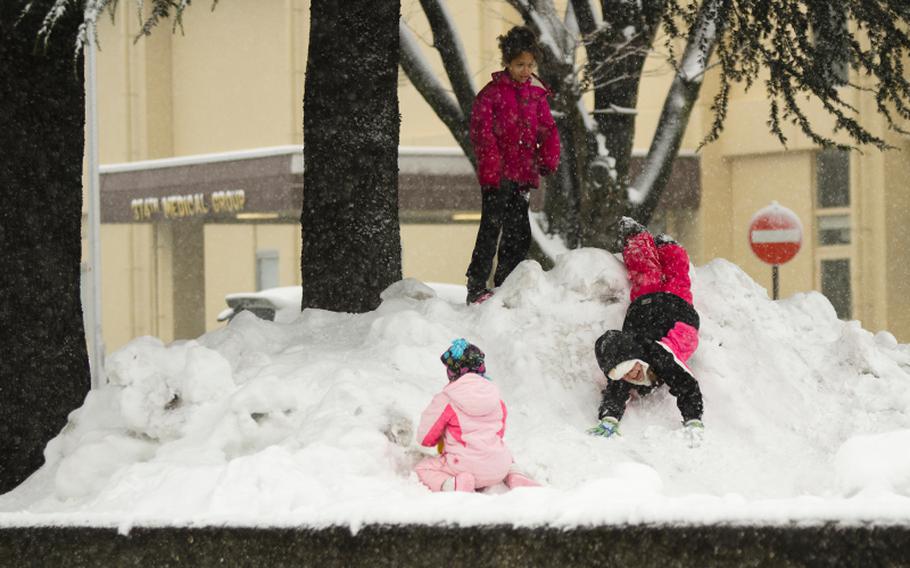 Children at Yokota Air Base near Tokyo enjoy the day off from school in front of the base medical clinic Friday, Feb. 14, 2014. A second winter storm in as many weeks was projected to leave as much as 12 inches of snow by the end of the day. (James Kimber/Stars and Stripes)

YOKOTA AIR BASE, Japan — U.S. Army Garrison Japan announced some base facilities will reopen Saturday at noon, depending on road conditions.

The second winter storm in a week was still dumping snow on U.S. military bases in Tokyo Friday evening, with forecasters predicting as much as 12 inches. The snow storm, a rare occurrence in Japan’s Kanto region, has also affected military personnel in Seattle, where the Air Mobility Command at Seattle-Tacoma International Airport delayed its flight to Yokota by at least 32 hours.

Officials from Yokota to Yokosuka proactively announced base closures and cancellations ahead of the storm.

On Thursday, Yokota Air Base residents were still digging out from last weekend’s record snowfall of 12.7 inches.

Officials there announced that many facilities, including schools, day-care centers and shops, would not open Friday because of the storm.

The base shuttle service has stopped running until further notice, and the base's main Fussa gate is closed to vehicles. Officials have asked non mission-essential personnel to remain indoors.

The Far East Wrestling Tournament at Yokota High School, though, is still running as scheduled through the weekend because all of the teams were already on base when the storm hit.

At Yokosuka Naval Base, schools closed, but day care facilities remained open through much of the day. Exchange facilities and the commissary unexpectedly closed in the middle of the day.

Naval Air Facility Atsugi shuttered, going to mission-essential functions only. The base exchange and commissary closed, and the Narita Airport, Yokosuka and Yokota shuttles were canceled. Navy weather officials are calling for 6-10 inches of snow, turning into heavy rain around midnight, with potentially destructive winds.

The Japan Road Traffic Information Center has not reported major delays on roads commonly used by U.S. personnel, but chains are required in some areas. Some train service in the Kanto area was suspended or delayed.

Hana Kusumoto in Tokyo and Erik Slavin at Yokosuka contributed to this report.