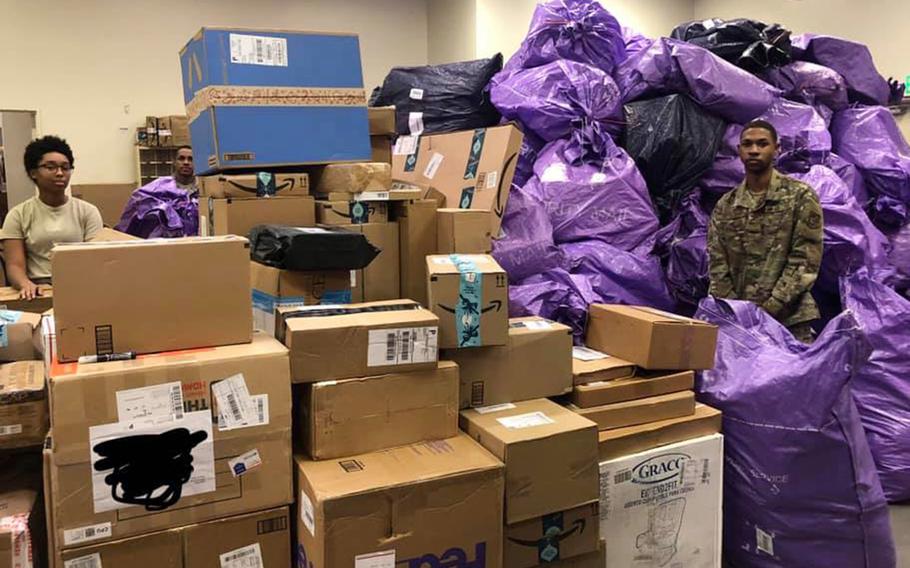 Airmen pose with packages inside the post office at Yokota Air Base, Japan, in this photo posted to Facebook on Monday, Dec. 9, 2019. "We have reached maximum capacity and can no longer process anymore mail," the message said. (U.S. Air Force)

YOKOTA AIR BASE, Japan — Residents at the home of U.S. Forces Japan in western Tokyo have received so many packages that the post office has run out of room, according to the Yokota Military Postal Service.

“We have reached maximum capacity and can no longer process anymore mail,” the facility warned in a Facebook post Monday. “Please come by the Post Office at your earliest convenience to pick up your packages so we can clear enough space to process more mail.”

A photograph with the message shows mail clerks standing among a flood of mailbags and boxes, many bearing the logo of online retailer Amazon.

Last week, the post office received more than 3,000 items weighing more than 14,000 pounds, not counting mailbags that each contain up to 25 items, according to Airman 1st Class Faith Boston, 21, a mail clerk from Wesley Chapel, Fla.

Last month, the Yokota post office changed its system for retrieving packages, and staff stopped placing paper notices in customers’ boxes informing them that an item had arrived.

To collect a package, customers must now either print out an email notification or fill out a yellow card at the post office with their name, box number and the shelf location of their package.

“The goal is to ensure timeliness of delivery, especially moving into the holiday season,” 374th Airlift Wing spokeswoman Kaori Matsukasa said in an email when the change was implemented last month.

Some who commented on the post office’s Facebook post Monday said they were expecting packages but hadn’t received email notices. Those people should check their spam/junk email folder or visit customer service for help, the post office said.

A line of people attempting to collect packages Monday afternoon stretched from the mailroom window to the end of the building.

When Joy Childers, 25, of Falkville, Ala., tried to collect a package Monday, she said she was told it might have been returned to the sender.

The Air Force spouse said she contacted the post office two months after ordering a cellphone case for her husband and was told it had arrived. However, it wasn’t there when she showed up. She was sent to customer service to find out if it had been sent back to China.

Boston, the mail clerk, said online sales appear to be a factor in the extra mail.

“There are more sales than before,” she said. “Veterans Day sales, Black Friday, Cyber Monday. There’s always something and I guess people are taking advantage of it.”

About 10 volunteers have been showing up at the post office each day to help sort mail this month, Boston said.

“They’ve seen how overwhelmed we are,” she said.