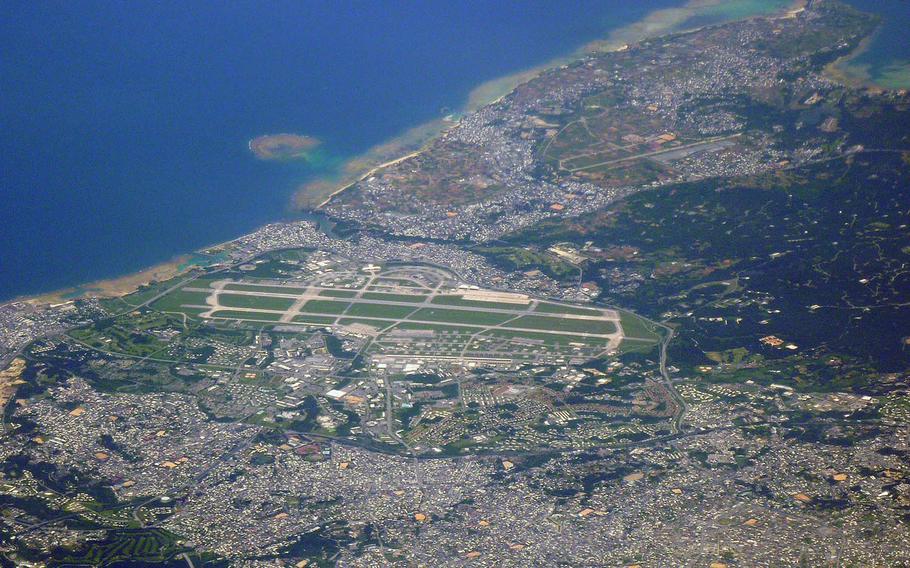 An aerial view of Kadena Air Base, Okinawa, from May 2010. (Wikimeida Commons)

CAMP FOSTER, Okinawa — Nearly 300 bombs from World War II were uncovered and removed from a Kadena Air Base construction site in recent weeks, according to Okinawa officials and local media reports.

The first of the 296 unexploded munitions was found Feb. 10 on the east side of Route 38 on the base ordnance facility in Chibana, the Okinawa Times newspaper reported Sunday.

The bombs were discovered during work to prepare the site for warehouses being relocated from the Marine Corps’ Camp Kinser in Urasoe. The property in Urasoe will be returned to the prefecture.

Another 280 bombs were uncovered March 8 and the last of the munitions were discovered the next day, the paper reported. They were removed by U.S. military explosive ordnance disposal personnel.

The Okinawa Defense Bureau confirmed the discovery to Stars and Stripes on Monday but referred questions to U.S. military officials. Kadena’s 18th Wing did not immediately respond to questions Tuesday.

The munitions were 8 to 12 inches long, according to the Okinawa Times.

The defense bureau, which represents the Japanese Ministry of Defense on the island, notified the city of the munition discovery. The city in turn notified a funeral home and community groups in Chibana.

A road in Okinawa city was closed several times during the removal work, sometimes on short notice, for between 35 minutes to five hours, according to an official with the city’s base affairs office. The closure delayed some visitors to a nearby funeral home, which afterward requested advance notice of a road closure.

A bureau spokesman said it would notify “related organizations” and set up signs indicating road closures in the event more munitions are found at the site, according to the Okinawa Times.

“We coordinate with related organizations by setting up signs notifying the road closure if closure is necessary,” the bureau spokesman said, according to the newspaper.