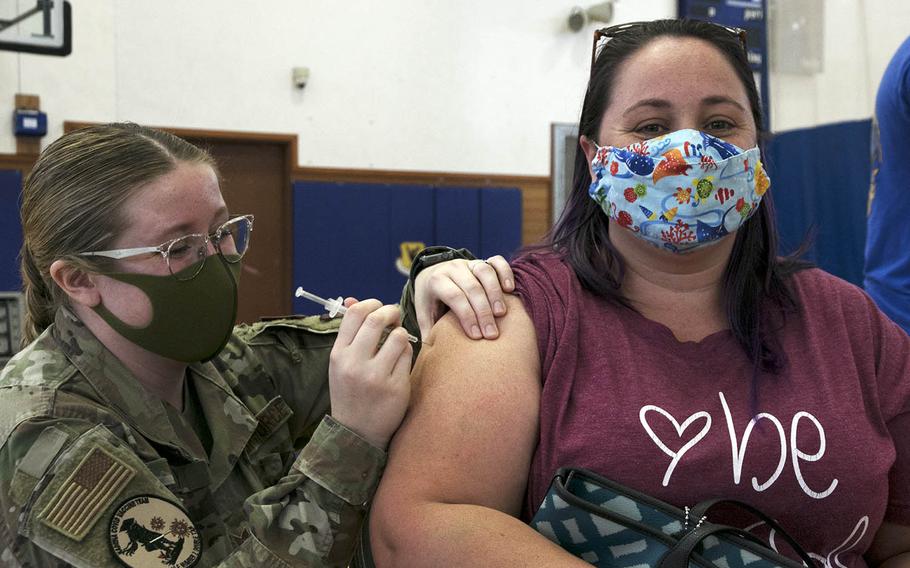 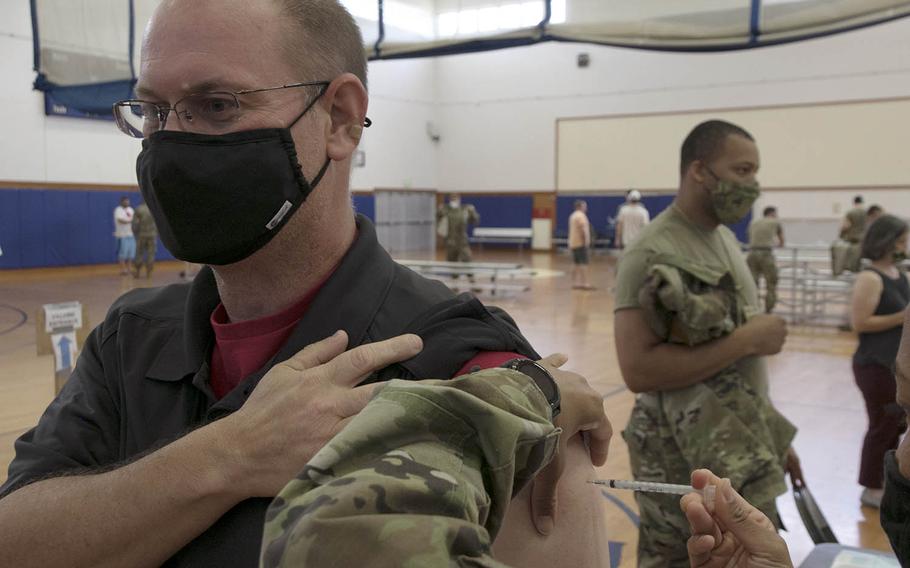 KADENA AIR BASE, Okinawa – The coronavirus vaccine is becoming more widely available to U.S. service members and their families in Japan but turnout Friday at a Kadena shot clinic left a health care professional disappointed.

Maj. Allen Hauser, chief of pharmacy operations and a vaccine project coordinator for the 18th Medical Group, watched intently as several dozen people waited on bleachers after receiving their shots inside the Risner Fitness and Sport Complex. Another dozen lined up nearby for their jab.

“We’d love to have more” patients, Hauser said. “It’s not necessarily that they have been slow to get out. It might simply be a matter of declination.”

U.S. commands in Japan have been tight-lipped, with some exceptions, on what percentage of their populations are vaccinated. But recent announcements of vaccine availability indicate they are moving toward the stated Defense Department goal of offering everyone the jab by early summer.

Airmen of the Kadena medical group have inoculated as many as 150 patients per hour, Hauser said.

However, he said he fears some airmen and civilian dependents are deciding against getting vaccinated. The military cannot mandate these vaccines, which are approved by the U.S. Food and Drug Administration for emergency use.

The 18th Wing has spread the word internally and on social media about the efficacy and safety of the two available vaccines, the two-shot Moderna and the one-shot version made by Johnson & Johnson. Hauser said the vaccines will protect personal health and also that of the Okinawa population and its large number of elderly.

Deziree Montano, 20, an Air Force dependent from New Mexico, wants to travel again. She came to Risner for her first shot as soon as she was eligible.

“I wasn’t scared,” Montano said afterward, sitting on bleachers with a Band-Aid on her shoulder. “It feels fine. It doesn’t feel like anything, really.”

James Roy Watkins, 47, a Boeing employee from Louisiana, came for his second shot with his wife, Cynthia, “so we can have side effects together,” she said, jokingly.

James Watkins was unfazed by potential side effects with the second dose of Moderna vaccine.

“It doesn’t bother me,” he said. “Typically, I don’t have too many reactions to shots so I should be fine.”

“I haven’t been home in two years,” Cynthia added. “Plus, to be healthy. It’s important to be safe.”

Kimberly Hipp, 37, of North Carolina, received her second shot Friday because she wanted to help the community reach “herd immunity.”

The wait beforehand was “nerve-wracking” because she doesn’t like shots, but she said she was glad she did it.