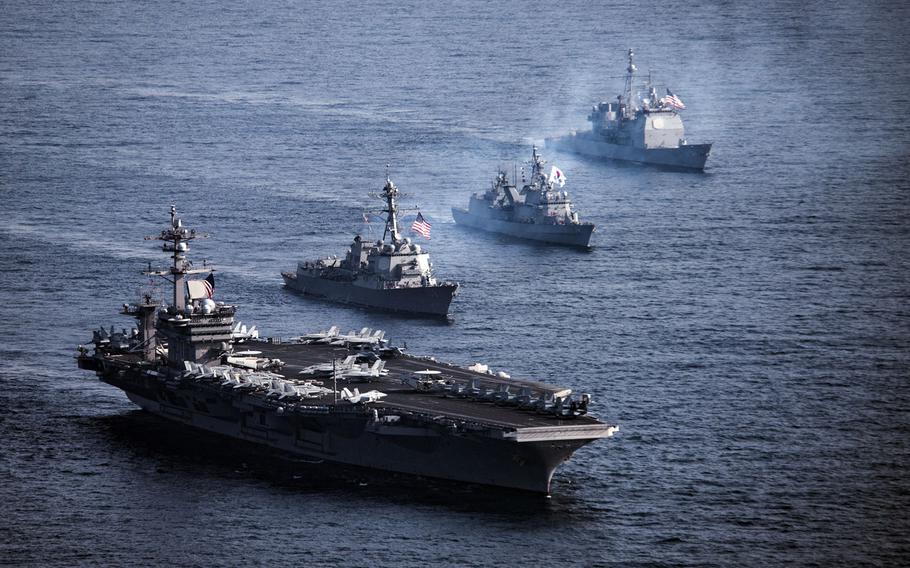 Elements of the USS Carl Vinson strike group trained with allies west of the Korean peninsula and south of Japan in March. ( Z.A. Landers/U.S. Navy photo)

YOKOSUKA NAVAL BASE, Japan — Elements of the USS Carl Vinson strike group trained with allies west of the Korean Peninsula and south of Japan, as the United States continues to watch for signs of an imminent nuclear weapons test from North Korea.

Meanwhile, the destroyer USS Wayne E. Meyer, which is part of the strike group, wrapped up drills with the South Korean Navy ship Wanggeon in the Yellow Sea late Tuesday, Navy officials said.

The Yokosuka, Japan-based destroyer USS Fitzgerald also trained with Japanese destroyer JS Chokai in the Sea of Japan, which is known in South Korea as the East Sea.

Such training events among the two allies’ sea service are relatively normal; however, the larger exercises are often planned several months in advance.

The Vinson strike group was ordered to the Western Pacific on April 8, as satellite imagery showed increasing activity around a North Korean nuclear-testing facility. The group had been scheduled for port visits in Australia.

On April 19, strike group commander Rear Adm. James Kilby announced that the group’s deployment had been extended 30 days “to provide a persistent presence in the waters off the Korean peninsula.”

The North has conducted five nuclear tests since 2006, with each test growing more sophisticated. It has also conducted several missile tests in recent months and stated a goal of developing an intercontinental ballistic missile capable of reaching the United States.