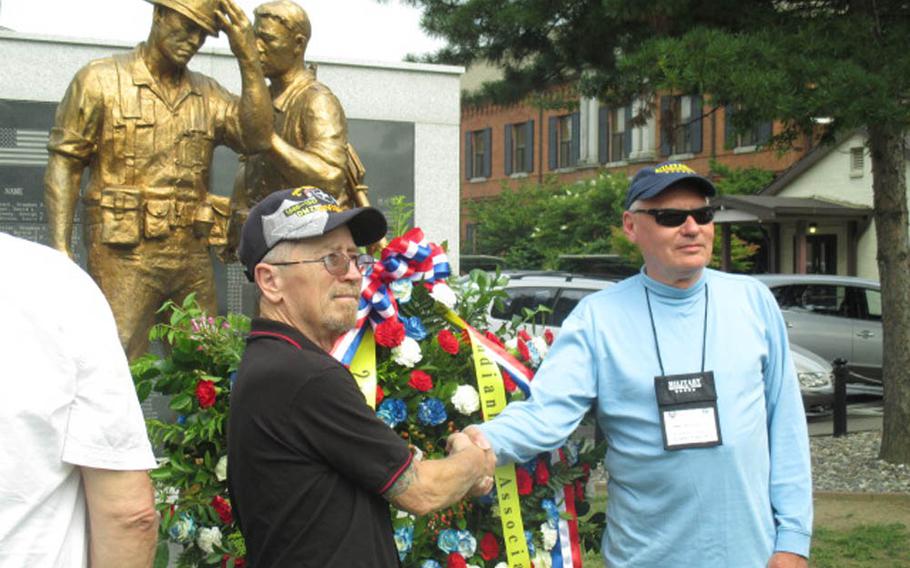 Buy Photo
Bob Haynes, left, and John Batty-Sylvan, right, both former 2nd Infantry Division soldiers who served in South Korea during the 1960s, pose Monday, June 29, 2015, in front of a memorial at U.S. Army Garrison Yongsan. The memorial honors U.S. and South Korean troops killed in combat since the end of the Korean War. Haynes and Batty-Sylvan are part of a veterans group that traveled to South Korea to take part in 50th anniversary celebrations this week of 2ID's presence on the peninsula. (Ashley Rowland/Stars and Stripes)

SEOUL, South Korea — Bob Haynes expected to be sent to fight in the rapidly escalating war in Vietnam like other men his age in the mid-1960s. Instead, he was assigned to the 2nd Infantry Division’s Camp Stanley, a world away from Southeast Asia’s steamy jungles.

On Haynes’ first night at the Demilitarized Zone, North Korean forces launched a pre-dawn ambush on a 2ID patrol that killed six Americans and one South Korean soldier just a half-mile south of the heavily patrolled border. A seventh American was wounded.

When he learned of the skirmish, Haynes, then 19, was shocked.

For Haynes and other 2ID soldiers, the November 1966 skirmish highlighted the ongoing danger of being stationed near the DMZ within close proximity of North Korean forces, even as the simmering conflict on the peninsula was overshadowed by the war in Vietnam.

Haynes returned along with 17 other 2ID veterans to mark the division’s 50th anniversary Wednesday. One of their first stops was a memorial at U.S. Army Garrison Yongsan that lists the 130 U.S. and South Korean troops killed in combat since the 1953 armistice, including those who died in the 1966 ambush.

Three of John Batty-Sylvan’s drinking buddies died during that surprise attack. Seeing they were recognized on the memorial was gratifying, the San Francisco resident said.

Most of the 2ID veterans served during the 1960s or ‘70s, when relations between the two Koreas were best described as a low-intensity conflict, said Michael Alexander, division historian and 2nd Infantry Division Museum director.

The period was marked by incidents such as the 1976 killings of two U.S. soldiers by ax-wielding North Koreans at the DMZ, and the infiltration and failed assassination attempt on the presidential Blue House in Seoul by 31 North Korean commandos in 1968.

“When these guys were here, it was the real deal,” Alexander said.

The group also visited Camp Humphreys, a base under expansion in Pyeongtaek that by 2017 is scheduled to house the bulk of U.S. soldiers on the peninsula.

“When most of these soldiers left Korea, it was still getting back up on its feet. We hadn’t seen the miracle on the Han yet,” said 2ID commander Maj. Gen. Theodore Martin, referring to South Korea’s rapid economic growth. “They couldn’t have dreamed about things like this when they were at the DMZ.”

He told the veterans that South Korea stands on its own two feet today because of the alliance with the U.S. and particularly the work of 2ID.

“Our patch is both feared and respected by the enemy and admired and loved by the people of Korea,” he said.

Michael Witmer, who was stationed at Camp Stanley in 1973 when oxcarts and dirt roads still ran through the center of Seoul, said returning to a heavily developed South Korea more than four decades later is “like walking into a ‘Twilight Zone’ episode.”

The retired history teacher from Lancaster, Pa., said Americans today know little about the tensions on the peninsula in the decades after the war.

“People just draw a blank when it comes to history,” he said. “This was like a footnote.”