Veteran infantry commander returns to 3rd Marine Division on Okinawa, this time as its leader 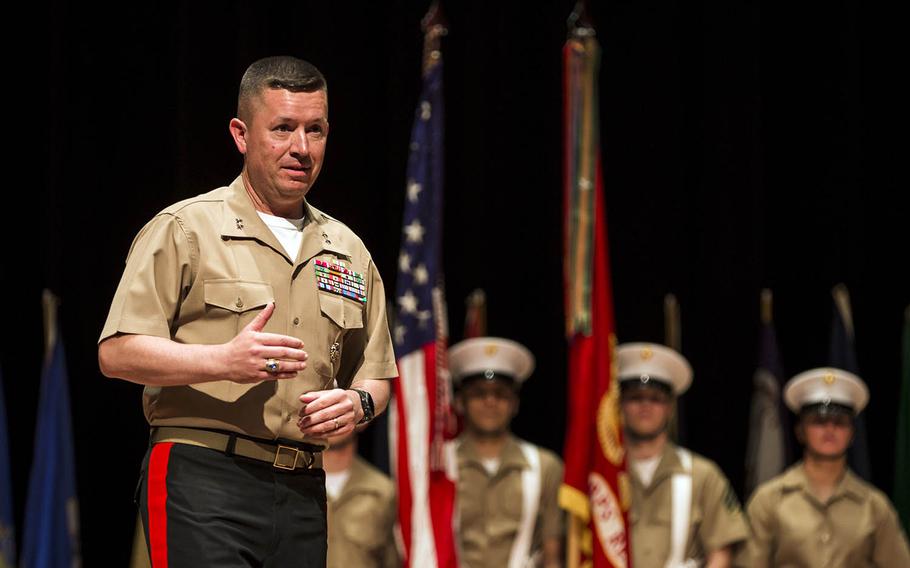 Bierman arrives from Quantico, Va., where he led Marine Corps Recruiting Command. He takes over from Maj. Gen. William Jurney, who improved discipline and readiness within the division during two years on the job, according to a Marine Corps news release.

Bierman previously served within the 3rd Marine Division, nicknamed the Caltrap Division, as commander of both 3rd Marines and 1st Battalion, 3rd Marines. A caltrap, an ancient, four-pronged anti-cavalry device, is the division insignia.

“I’m honored to rejoin 3rd Marine Division and follow in the footsteps of Maj. Gen. Bill Jurney,” Bierman said, according to the release. “Under his leadership, the Division has truly excelled … Going forward, Caltrap will remain ready to fight and win anywhere on short notice, while continuing to move the ball forward on critical experimentation and innovation efforts.”

The 3rd Marine Division is part of the III Marine Expeditionary Force and includes the 3rd Marine Regiment on Hawaii and the 4th and 12th regiments on Okinawa, as well as the 3rd Expeditionary Brigade and other units, according to a Marine Corps organization chart.

It also includes rotational units through the Unit Deployment Program.

The main job of the division, which is supported by the 1st Marine Air Wing, is amphibious assault.

Bierman was born in Camp Lejeune, N.C., and graduated from the Virginia Military Institute, according to his Marine Corps biography. He was commissioned as an officer in 1987.

Over a career of 30-plus years, Bierman has also seen service in the Persian Gulf, the Mediterranean and Somalia, according to a statement released when he assumed the recruiting command in June 2018.

In high-level staff jobs, Bierman served as military secretary to Commandant of the Marine Corps Gen. James Amos and on the Joint Staff as deputy director for political-military affairs for the Middle East, strategic plans and policy direction, his biography states.

During his tenure, he implemented future force concepts like the integration of long-range precision fire, according to the release.