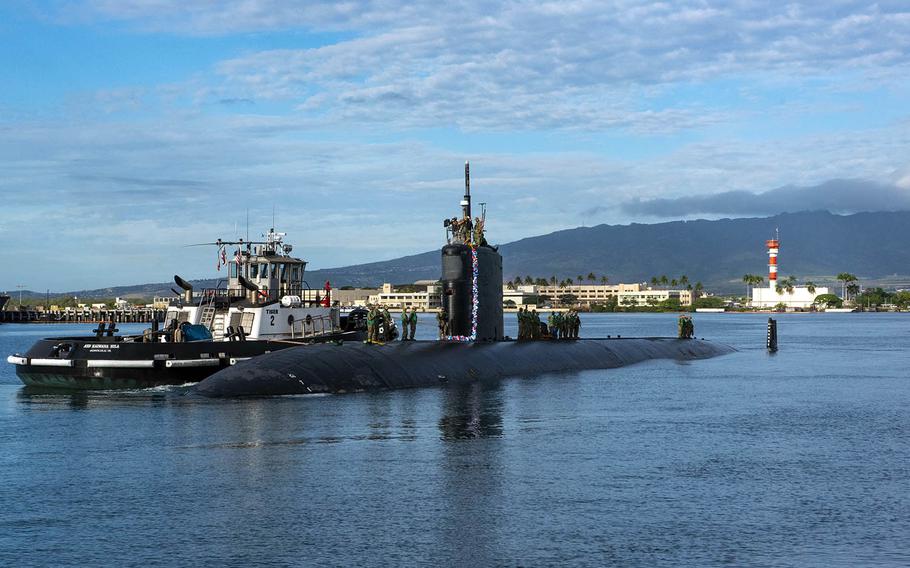 FORT SHAFTER, Hawaii — Pearl Harbor became home to another fast-attack submarine as the USS Topeka changed its homeport to Hawaii on Tuesday.

The vessel, formerly homeported in Guam since 2015, became the 10th Los Angeles-class submarine to be stationed at Joint Base Pearl Harbor-Hickam, the Navy said in a news release Wednesday. It is assigned to Submarine Squadron 7.

The sub is slated to soon go into Pearl Harbor Naval Shipyard for regularly scheduled major maintenance for upgrades and repairs, the Navy said.

“The crew and their families did a fantastic job of getting things ready in a timely manner and transitioning to a new place,” Cmdr. Richard Salazar, Topeka’s commanding officer, said in the news release.

“There is so much logistics and stress that goes into a change of homeport, but the crew and their families did a tremendous job navigating through it all, and we are so happy to be here.”

USS Topeka was “the tip of the spear” during its five years stationed at Guam, Capt. Mike Majewski, commodore of Submarine Squadron 7, said in the news release.

“She steamed thousands of nautical miles in support of national and Pacific Fleet objectives and participated in numerous national and international exercises,” he said.

Since 2015, the submarine deployed four times, participated in 14 exercises and earned the service’s Engineering Efficiency Award each year, the Navy said.

The Topeka became the fourth Los Angeles-class submarine to be homeported in Guam in 2015 as part of the Obama administration’s Pacific rebalance intended to enhance the Navy’s forward presence in the region.

Topeka was commissioned in 1989 and was given a complete engineering overhaul at Portsmouth Naval Shipyard, N.H., before being sent to Guam.

The sub can support a variety of missions, including anti-submarine warfare; anti-surface ship warfare; surveillance and reconnaissance; and strike warfare, the Navy said.

Topeka returned from its last deployment, in the Western Pacific, on Oct. 24.