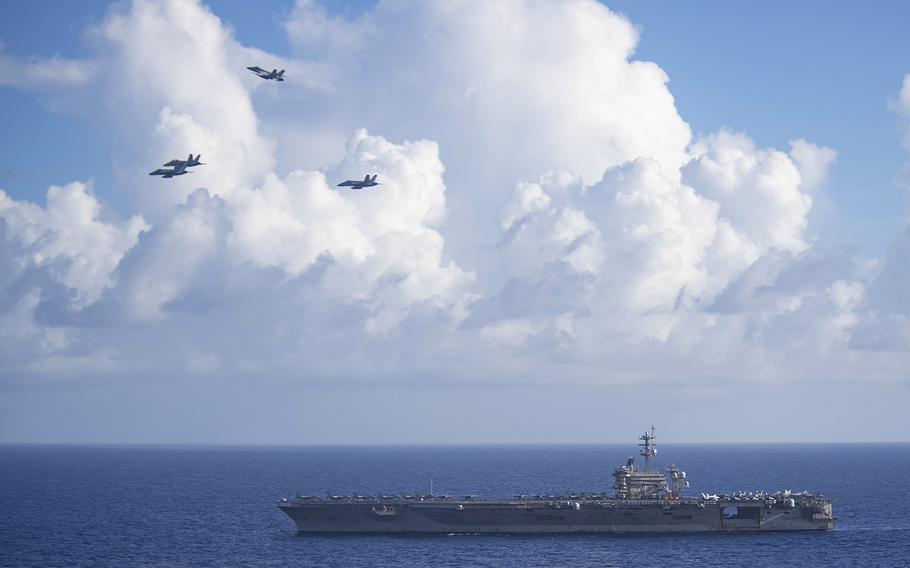 YOKOSUKA NAVAL BASE, Japan — Two aircraft carriers sailed in unison Sunday in the Western Pacific to kick off combined flight operations this week.

The USS Theodore Roosevelt and USS Nimitz teamed up for drills in the Philippine Sea to demonstrate “the United States’ unique capability to operate multiple carrier strike groups in close proximity,” according to a Navy statement issued over the weekend.

“By working together in this environment, we’re improving our tactical skills and readiness in the face of an increasingly pressurized region and COVID-19,” Roosevelt Strike Group commander Rear Adm. Doug Verissimo said in the statement, referring to the disease caused by the coronavirus.

Sunday’s drills were the first dual-carrier operations in the Western Pacific since November 2018 when the USS Ronald Reagan and USS John C. Stennis trained together in the Philippine Sea. They take place as China is also flexing its naval muscle with two carriers scheduled for exercises in the region.

The Navy has beefed up its presence in June after more than two months without a carrier operating in the Indo-Pacific region other than the USS America, an amphibious assault ship with F-35B Lightning II multirole aircraft on board.

The Roosevelt had been patrolling the region since January when a coronavirus outbreak on the ship forced the carrier to stop in Guam in late March to sanitize the ship and test, isolate and treat ill sailors. More than 1,150 Roosevelt sailors ultimately tested positive for the virus, one of whom died.

The Roosevelt departed Guam on June 4, and the Nimitz left San Diego four days later. A third carrier, the Reagan, left Yokosuka on June 8 to start its patrol of the Western Pacific.

The flight operations follow Roosevelt naval aviators’ ejection from an F/A-18F Super Hornet over the Philippine Sea on Thursday. A Roosevelt helicopter rescued the pair soon after, and onboard medical personnel deemed them to be in good condition, the Navy said at the time.

Dual-carrier operations act as “a powerful message of our commitment to regional security and stability as we protect the critically important rights, freedoms, and lawful uses of the sea for the benefit all nations,” Nimitz Strike Group commander Rear Adm. James Kirk said in the statement.

“The United States Navy has long history of operating multiple carrier strike groups as a combined force in the Pacific,” he said.

Still, such operations are relatively infrequent. Sunday marked only the sixth time since 2001 that two carriers have operated together in the Western Pacific, said 7th Fleet spokesman Lt. Joe Keiley.

The drills come as China plans its own carrier operations this summer in the Philippine Sea, the South China Morning Post reported May 24. Beijing in December commissioned its second aircraft carrier, the Shandong, which left its shipyard for sea trials and training drills on May 29, according to the Chinese Ministry of Defense.

Beijing’s first aircraft carrier, the Liaoning, was spotted twice in April sailing the Miyako Strait, 205 miles east of Taiwan and between the Japanese islands of Miyako and Okinawa. Though the strait is an international waterway, the U.S. and its allies watched the transits closely.

It’s unclear whether the two Chinese carriers will train together, according to the South China Morning Post report.