Sailors assigned to the aircraft carrier USS Theodore Roosevelt move meals, ready to eat for shipmates who have tested negative for the coronavirus at Naval Base, Guam, April 7, 2020. (Julio Rivera/U.S. Navy)

Sailors assigned to the aircraft carrier USS Theodore Roosevelt move meals, ready to eat for shipmates who have tested negative for the coronavirus at Naval Base, Guam, April 7, 2020. (Julio Rivera/U.S. Navy) 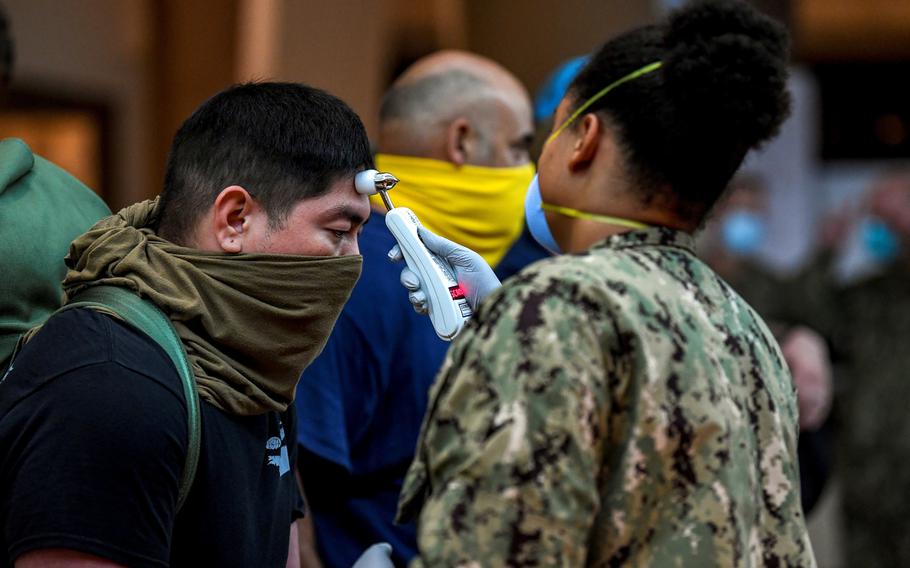 Sailors assigned to the aircraft carrier USS Theodore Roosevelt, which is docked at Naval Base Guam, are tested for coronavirus, April 7, 2020. (Julio Rivera/U.S. Navy)

More than half of all U.S. sailors who have tested positive for coronavirus are attached to the aircraft carrier USS Theodore Roosevelt, according to Navy data released Wednesday.

Across the Navy, 548 service members have contracted the illness and 286 of those are Roosevelt sailors, the update said. Nearly all the ship’s crew has been tested, with 10% coming back positive. None have been hospitalized.

It’s unclear with which ships, installations or units the remaining cases are associated. The Department of Defense late last month directed all services to refrain from releasing coronavirus numbers specific to commands.

The Roosevelt made headlines after an outbreak on the ship caused it to divert to Guam on March 26.

Officials continue to disembark and test the Roosevelt crew and sanitize the ship. About 2,329 sailors had moved ashore as of Wednesday; at least 1,232 of them had moved into hotel rooms to carry out a 14-day quarantine, according to the Navy.

Chief of Naval Operations Adm. Mike Gilday said in a message to the fleet early Tuesday that “in this new environment of coronavirus, we’re all learning, adapting and improving by the hour.”

“There is no better example of this than USS Theodore Roosevelt — staring down an invisible enemy, dedicated in their efforts, making phenomenal progress and providing lessons for the Navy and beyond,” he wrote in the message.

The Navy’s initial response to the Roosevelt’s outbreak erupted in controversy after then-commanding officer Capt. Brett Crozier wrote to Navy higher-ups pleading for help curbing the virus’ spread among his 4,000 sailors. The letter was leaked to the San Francisco Chronicle and picked up from there by worldwide media.

“Due to a warship’s inherent limitations of space, we are not doing this [on board],” Crozier wrote March 30. “The spread of the disease is ongoing and accelerating.”

“We are not at war. Sailors do not need to die. If we do not act now, we are failing to properly take care of our most trusted asset — our sailors,” he added.

Acting Navy Secretary Thomas Modly on April 2 relieved Crozier from command, drawing scrutiny from sailors, legislators and the public. On Tuesday, after further tumult, including a flight to Guam to address the Roosevelt crew directly and criticizing Crozier, Modly resigned.