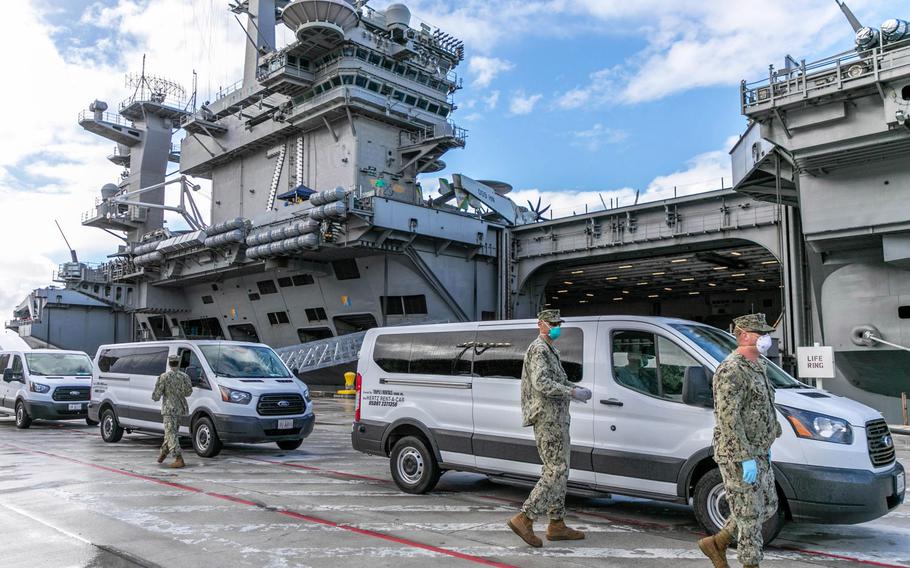 USS Theodore Roosevelt sailors who tested negative for COVID-19 are moved to lodging and quarantine on Guam, April 3, 2020. A sailor assigned to the Roosevelt is in intensive care following complications from a coronavirus infection, the Navy said. (Matthew R. White/U.S. Navy)

A sailor assigned to the aircraft carrier USS Theodore Roosevelt was in intensive care Thursday after suffering complications from a coronavirus infection, the Navy said.

The sailor, who tested positive for the virus March 30, had been in a 14-day isolation period on Naval Base Guam before being taken to the base hospital, the service said in a statement.

“Deep down, I was hoping that we would never get to this point — I was hoping that the numbers would be zero at the end of this, but that's just not going to be the case with coronavirus,” Air Force Gen. John Hyten, the vice chairman of the Joint Chiefs of Staff, said Thursday during a news briefing at the Pentagon. “There's always going to be the one or two that that come in, even in our demographic. That happened for the first time this morning. So we're hoping that that sailor recovers.”

Almost the entire 4,800-member crew of the Roosevelt has been tested, with 3,170 sailors testing negative and 416 sailors testing positive, Hyten said. Of the sailors who have the virus, 187 sailors had symptoms and 229 were asymptomatic. The hospitalized sailor was found unconscious in the morning by a friend.

The outbreak on the Roosevelt caused the ship to divert to Guam on March 26. About 2,700 members of the crew are now off the ship and spread out across the island.

Medical teams check on crew members twice a day and sailors also have a buddy system to check on one another, Hyten said.

The ship has been at the center of controversy since Capt. Brett Crozier, the ship’s skipper until last week, urged speedier evacuation of nearly its entire crew in a letter that was leaked to the media. The leaked letter led to Crozier’s dismissal and the resignation of acting Navy Secretary Thomas Modly, who ordered the captain be fired.

Modly resigned Tuesday, the day after giving a speech in Guam to the crew and saying the captain was either “too naive or too stupid” to command, or was intentionally negligent in his handling of the memo.

Modly’s remarks were broadcast over the ship’s public address system, and online videos later showed hundreds of sailors aboard the ship cheering and applauding the captain he’d fired.

Hours afterward, the recording and a transcript of his remarks leaked. Modly apologized, adding he believed Crozier had intended for the letter to be made public.

In a final weekly message to the force Tuesday, Modly acknowledged he’d “lost situational awareness” when he walked onto the ship to deliver his address.

“The crew deserved a lot more empathy and a lot less lecturing — I lost sight of that at the time and I am deeply sorry for some of the words and for how they were spread across the media landscape like a wildfire,” he said.