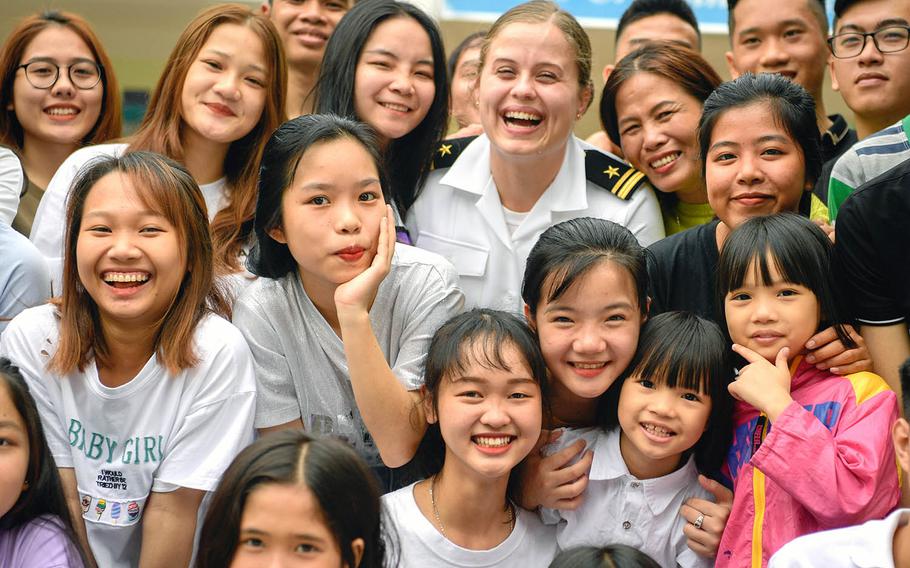 In the days after the aircraft carrier completed its historic five-day port call to Danang that ran March 5-8, crew members began exhibiting symptoms of the disease, which originated in China late last year.

The Roosevelt’s commander, Capt. Brett Crozier, was fired for raising alarm over the ship’s uncontrolled contagion, and the carrier is now in Guam grappling with the unfolding crisis, which has left one sailor dead and several in intensive care.

“I don’t know who gave the orders to stop in Vietnam, but they stopped in Vietnam, and all of a sudden they get on and now you have over 500 sailors and people on the ship that are infected,” Trump said to a Reuters reporter at the White House briefing Monday. “I don’t know whose idea that was, but that wasn’t such a good idea in the middle of a pandemic.”

But the decision to move forward with the port call was made by high-ranking Pacific military officials only after a thorough analysis of risks posed at that point in the spread of the virus, according to a written statement provided to Stars and Stripes by Pacific Fleet spokesman Cmdr. Myers Vasquez.

Three days before the Roosevelt arrived in Vietnam on March 5, Trump himself saw little risk posed by the virus. When a reporter asked Trump during a March 2 news conference whether it was “safe or appropriate” for him to continue holding arena-sized rallies, he responded, “I think it’s safe, yeah. I think it’s very safe.”

At that time, the U.S. had just over 100 confirmed cases of the virus, with six deaths.

Planning for the Roosevelt’s port call in Danang began in the fall and involved coordination among the U.S. Department of State, Office of the Secretary of Defense, U.S. Indo-Pacific Command, U.S. Pacific Fleet and U.S. Embassy Vietnam with Vietnam’s ministries of foreign affairs and defense, Vasquez said.

The intent was to commemorate the 25th anniversary of the U.S.-Vietnam diplomatic relations, coming decades after the end of the lengthy war between the two nations. The Roosevelt would be only the second aircraft carrier to visit Vietnam since the fall of Saigon in 1975.

The visit, which also included the guided-missile cruiser USS Bunker Hill, was an important step in expanding the strategic partnership between the two countries by increasing cooperation in areas such as maritime security, peacekeeping operations, humanitarian assistance and disaster relief, Vasquez said.

Indo-Pacific Command sent an “execution order” to Pacific Fleet in January to formally set the carrier visit in motion, he said.

Pacific Fleet conducted a risk analysis looking at data from interagency health organizations, virus mitigation efforts for the crews, confidence in the accuracy of Vietnam’s public health reporting and actions already taken by Vietnam to isolate and contain the virus, Vasquez said.

At the time of the port call, neither the State Department nor the Centers for Disease Control and Prevention had issued travel restrictions for American citizens to Vietnam.

Vietnam had 16 confirmed cases of COVID-19, the disease caused by the virus, as of March 5, but all had been in Hanoi, far to the north of Danang, Vasquez said. All had recovered, and no new cases had been reported in the country since Feb. 13.

“Throughout the port visit all scheduled events in Da Nang were reviewed for potential COVID risk and additional support was provided by the host country to screen local participants at these events as well,” he said. “A humanitarian assistance/disaster response professional exchange occurred between U.S. Navy medical staff and local health professionals.”

After two British tourists staying at a Danang hotel tested positive for the virus on March 7, U.S. officials identified 39 sailors who had visited the hotel and possibly had contact with the pair, Vasquez said. All were screened and tested by Vietnamese officials and then placed in 14-day quarantine on the Roosevelt.

Professional exchanges and tours scheduled for March 8 were canceled and liberty was curtailed. Both ships left the next day.

None of the 39 sailors tested positive for the virus during the quarantine, but 15 days after leaving Danang, three other Roosevelt sailors — none of whom were connected to the pair of tourists or the hotel — tested positive, Vasquez said. No USS Bunker Hill sailor tested positive during that same time frame, he said.

The Navy has never confirmed that Roosevelt’s “patient zero” contracted the virus in Danang, Vasquez said.

Personnel and supplies arrived on the carrier in the two weeks following the port call that could have brought the virus aboard, he said.