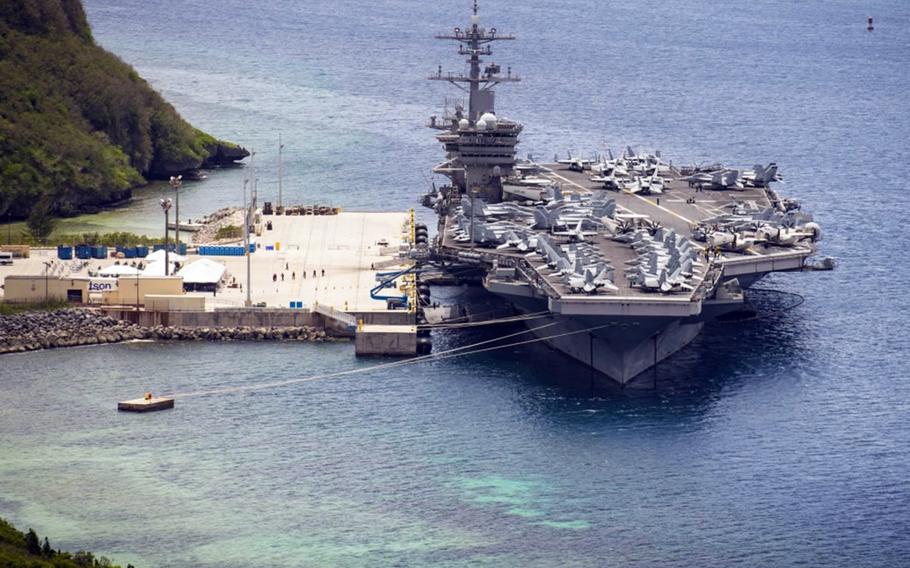 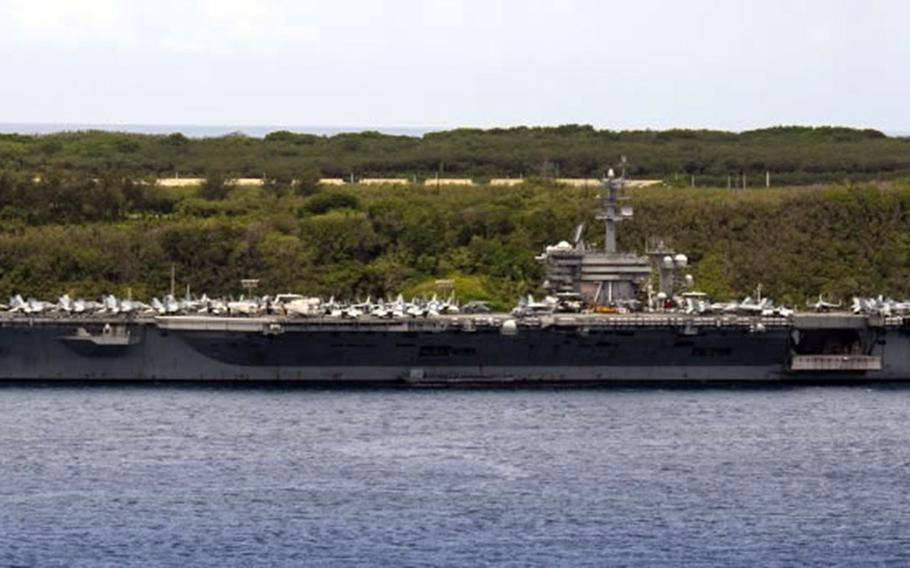 YOKOSUKA NAVAL BASE, Japan — After spending six weeks sidelined in Guam to battle a coronavirus outbreak on board, the USS Theodore Roosevelt took a step toward re-deploying over the weekend, the Navy said Monday.

Sailors aboard the aircraft carrier on Sunday began an at-sea simulation called a “fast cruise” while moored at Naval Base Guam, according to a statement.

During a fast cruise — typically one of the final steps before a Navy vessel deploys — crews “simulate normal underway conditions while testing the critical systems required to sustain the ship during its upcoming underway operations,” the statement said.

“Fast cruise is a major milestone for the ship and for the crew,” Roosevelt commander Capt. Carlos Sardiello said in the statement. “Our Sailors have tested all of the ship’s systems individually, but this is our opportunity to integrate all of that together and show that Theodore Roosevelt is ready and able to go back to sea.”

The carrier had been deployed to the Western Pacific when it diverted to Guam on March 26 after several of its sailors tested positive for the coronavirus. Since then, more than 1,150 Roosevelt sailors have tested positive, one of whom died, according to the Navy.

As many as 13 sailors from the Roosevelt have tested positive for the virus a second time, according to The Associated Press. Those sailors and a number of others who had contact with them were removed from the ship.

Most of the 4,800-person crew disembarked and were isolated last month as the carrier was sanitized. The Navy began moving sailors back aboard the Roosevelt on April 29 after all crew members were tested for the virus.

As of Sunday, 2,900 sailors had returned to the carrier, according to Monday’s statement.

During the fast cruise, sailors will also be “implementing new measures to protect the crew from possible exposure to the novel coronavirus,” the statement said. For the past month, sailors have been wearing masks and maintaining social distance.

“Safely navigating an aircraft carrier is a complex process that involves teams of Sailors throughout the ship,” Roosevelt navigation officer Cmdr. Christopher Brown said in the statement. “We are setting the normal underway watches and running through various navigation scenarios so that the bridge watch teams can learn how to effectively communicate with one another while still protecting themselves and each other.”

After the fast cruise, the Roosevelt will begin underway training and carrier qualifications “to support the air wing’s return to operational readiness.”

Not all Roosevelt sailors will attend, though. Those who are not required for the underway training will remain pierside to support sailors still in quarantine and isolation, the Navy said.

After the air wing conducts its carrier qualification flights, the remainder of the crew will re-embark, according to Monday’s statement.

The ship will not wait for all crew members to clear quarantine before returning to sea, Sardiello told CBS News on May 5. Those who remain in isolation at the point of re-deployment will stay behind.

Sardiello took over for Capt. Brett Crozier when then-acting Navy Secretary Thomas Modly removed him as commander after a letter he wrote pleading for help for his crew was leaked to the San Francisco Chronicle and picked up by worldwide media.

Modly received backlash from sailors and lawmakers for removing Crozier and resigned about a week later after a recording of his speech to the Roosevelt’s crew criticizing Crozier and calling him “stupid” was leaked to the public.

Crozier’s removal prompted a preliminary inquiry into the handling of the Roosevelt outbreak. After receiving the inquiry’s results, Chief of Naval Operations Adm. Mike Gilday on April 30 ordered a follow-on command investigation.

Gilday and new acting Navy secretary James McPherson on April 21 recommended Crozier be returned to the Roosevelt's helm, the New York Times reported May 1. That decision was delayed, however, with the announcement of the follow-on investigation.

The results, due to Gilday by May 27, will “provide a more robust documentation of events and give a fuller consideration of the circumstances surrounding the matter,” Gilday’s spokesman, Cmdr. Nate Christensen, said in a statement last month.

The Roosevelt has been away from its San Diego homeport since it left for patrol on Jan. 17.