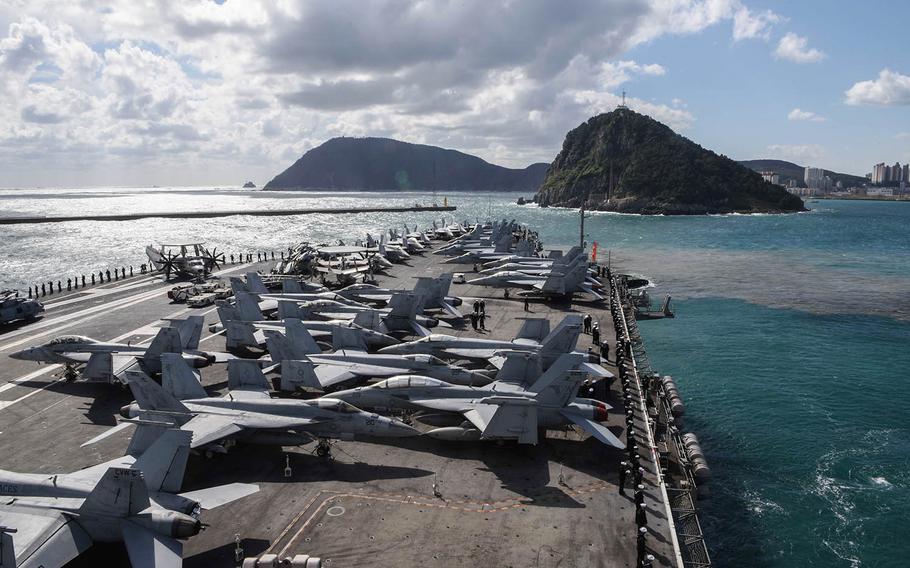 The USS Ronald Reagan maneuvers along the South Korean coast ahead of a port visit to Busan, Oct. 21, 2017. (MacAdam Weissman/U.S. Navy photo)

YOKOSUKA NAVAL BASE, Japan — A USS Ronald Reagan aviation ordnanceman has been sentenced to two years in prison after being accused of sexually assaulting a fellow sailor, lying to Naval Criminal Investigative Services and strangling a civilian woman.

Petty Officer 3rd Class Steven Garcia, 27, pleaded guilty Wednesday to assault consummated by battery, making a false official statement and aggravated assault. He was originally charged with two counts of abusive sexual contact causing bodily harm but pleaded down to the assault charges in a pre-trial agreement with prosecutors.

The first assault happened Oct. 22, 2017, during a Ronald Reagan port visit in Busan, South Korea, Garcia admitted in court Wednesday. After a night of drinking with friends, Garcia’s first victim said she lost consciousness and woke up in her hotel room to Garcia forcefully penetrating her with his hand and mouth, causing her pain.

“I remember telling him to stop and that I didn’t want this,” his victim told the court Wednesday. “He said, ‘You don’t [expletive] want this?’ … I just physically couldn’t get him off of me.”

The victim said Garcia knew she was not romantically interested in him because she had turned down his propositions before, reminding him of his marriage. She said she continues to suffer mentally and emotionally from the trauma.

In his stipulation of facts, Garcia admitted to “touching” – not penetrating – the victim’s vulva with his fingers without her consent, which a Navy official said does not meet the Uniform Code of Military Justice definition of sexual assault. Therefore, he was not convicted of a sex crime.

After the victim reported the assault, Garcia lied to NCIS investigators by denying he had any contact with the victim, he said Wednesday.

The second assault happened about two weeks ago. On Oct. 27, Garcia placed both of his hands around a civilian woman’s neck and squeezed long enough for her face to turn red, he told the military judge Wednesday.

“I squeezed hard enough that if I kept doing it she would have passed out,” Garcia said. “She was having trouble breathing.”

For the judge to accept the aggravated assault charge associated with the strangling incident, it had to be proven that the act was “likely to cause grievous bodily harm.”

“If I would have kept going, she could have potentially gone brain dead because of a lack of oxygen,” Garcia told the judge.

The judge ultimately accepted his guilty pleas, and prosecutors asked for a three-year prison sentence. Garcia expressed remorse for “put[ting] himself in that situation” in the first assault case and apologized to that victim for betraying her trust. He also issued a public apology for hurting his second victim, who was not in court.

The judge ultimately sentenced Garcia to two years confinement. Further, the judge ordered Garcia’s discharge from the Navy on bad conduct and his paygrade to be reduced to E-1, according to court documents. He will not have to register as a sex offender.

Prior to his sentencing, Garcia had spent 18 days in confinement. Those days will count toward his 24-month sentence.

The Ronald Reagan was listed as the 15th highest-risk Navy command for female sailors to experience sexual assault, according to a Rand Corp. report released in September. In 2014, about 10 percent of women assigned to the Yokosuka-based carrier reported being sexually assaulted, according to the study.

The Ronald Reagan is homeported in Yokosuka, Japan, but was based in San Diego at the time of the 2014 study.