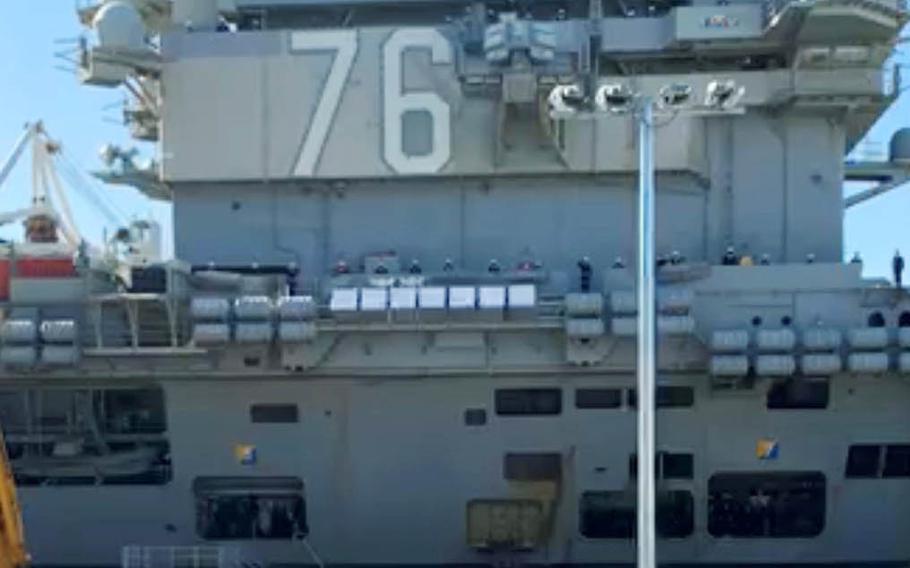 The aircraft carrier USS Ronald Reagan arrives at its homeport, Yokosuka Naval Base, Japan, in this screenshot from a live video on the carrier's Facebook page, Saturday, Nov. 14, 2020. (Facebook)

YOKOSUKA NAVAL BASE, Japan — Sailors manned the rails 6 feet apart aboard the aircraft carrier USS Ronald Reagan as it returned to its homeport here on Saturday.

Homecoming isn’t the same during the coronavirus pandemic. There were no loved ones on the pier, no bands and no fanfare to welcome the crew home after a five-month patrol that included rare dual-carrier operations and three visits to the South China Sea.

Families instead watched their sailors pull into port via a live-streamed video posted to the carrier’s Facebook page. More than 1,500 were viewing the event at 10:15 a.m., sending virtual hearts and leaving comments like “OMG he’s back!” and “BEST DAY EVER! Welcome home!”

“In order to get Sailors home to see their loved ones, the ship will rely heavily on pre-designated walking routes on base and the use of buses,” she said by email.

Carrier Air Wing 5 flew off the carrier to its home at Marine Corps Air Station Iwakuni on Nov. 6, according to a post on the base Facebook page.

The Reagan deployed in early June, but many of the crew had not seen their families since going into pre-deployment quarantine as early as April. The month before, the aircraft carrier USS Theodore Roosevelt diverted to Guam mid-deployment to address an outbreak that infected more than 1,150 crewmembers with the coronavirus.

While the Reagan successfully avoided a widespread coronavirus outbreak this patrol, a “small number” of its sailors tested positive aboard the ship on Aug. 27.

Despite the infections, the Reagan continued its operations by imposing measures that contained the virus’ spread, Vice Adm. Phil Sawyer, deputy chief of naval operations for operations, plans and strategy, told reporters during a September conference call.

During its patrol, the Reagan twice participated in operations this summer with the carrier USS Nimitz, based in Bremerton, Wash. In June, the carriers trained together in the Philippine Sea, and in July met for exercises in the South China Sea.

Dual-carrier operations are relatively rare. The Navy has conducted just eight in the Indo-Pacific since 2001, three of them this year.

Although China planned its own carrier operations in the South China Sea, according to the South China Morning Post on May 24, the U.S. Navy in July said the presence of the Reagan and the Nimitz in the same area was “not in response to any specific political or world events.”

The carriers’ exercise also took place about a week before Secretary of State Mike Pompeo on July 13 for the first time laid out the official U.S. stance rejecting China’s claims of sovereignty over most of the 1.4 million square miles of the South China Sea and dozens of militarized islands within it.

The Reagan returned to the contested waters twice more this fall before making its way home. The carrier held air-defense exercises there in August, and maritime security operations including flight operations and maritime strike exercises, the Navy said Oct. 15.

China reportedly held live-fire drills in the South China Sea the day after the Reagan’s August exercises, the Chinese military said at the time.

During its 2020 deployment, the carrier also participated in exercises, including Valiant Shield, transited the Strait of Malacca twice and operated with the navies of regional allies and partners, such as Japan.