The aircraft carrier USS Ronald Reagan is seen from the air at Yokosuka Naval Base, Japan, April 25, 2020. (Rafael Avelar/U.S. Navy)

The aircraft carrier USS Ronald Reagan is seen from the air at Yokosuka Naval Base, Japan, April 25, 2020. (Rafael Avelar/U.S. Navy) 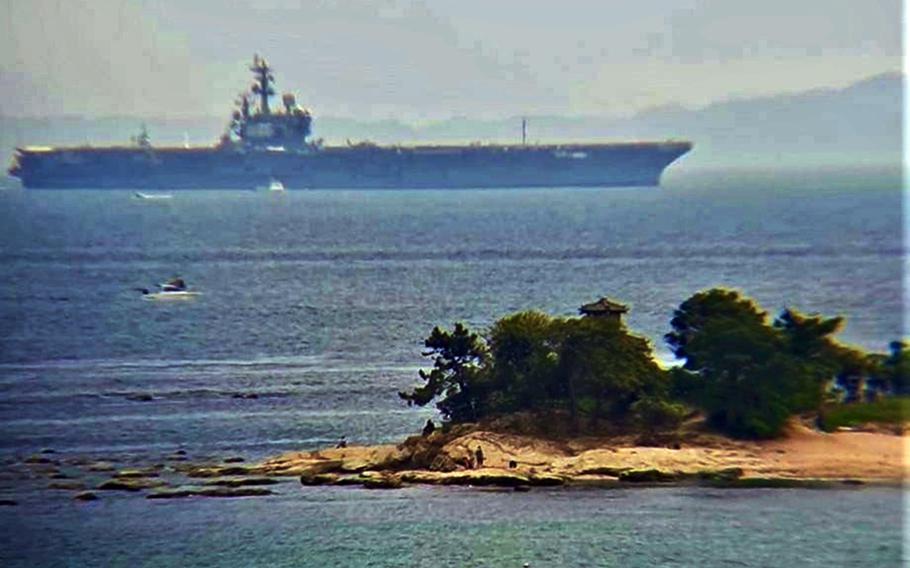 The underway testing period typically lasts about a week and is one of the final phases before vessels leave for extended patrols. Details about whether the aircraft carrier would return to Yokosuka before deployment officially begins were unavailable, as the Navy does not discuss future personnel or ship movements by policy.

The hulking carrier was noticeably absent from its berth here Tuesday after leaving its homeport for the first time since November. The ship had been undergoing a regular maintenance period since returning from a six-month deployment in November.

A coronavirus outbreak at Yokosuka in March added an extra hurdle to getting underway. Navy officials have not said how many on the Reagan have tested positive for the virus, but the New York Times on April 22 reported 16 positive cases associated with the carrier.

“The Coronavirus Disease 2019 pandemic brought an invisible enemy to our shores and changed the way we operate as a Navy,” Chief of Naval Operations Adm. Mike Gilday told sailors in a written message to the fleet on Thursday. “The fight against this virus is a tough one.”

Despite the pandemic, Gilday said, the Navy has “a duty to ensure we are ready to respond.”

“We cannot simply take a knee or keep everyone in port until this enemy is defeated. We are America’s away team,” Gilday said in his message. “The uncertainty caused by [the coronavirus] makes our mission of protecting America at sea more important than ever.”

“That is why the U.S. Navy continues to operate forward every day,” he added.

To prevent crews of the Reagan and its strike group from bringing the virus onto their ships, sailors since last month have been undergoing phased sequestrations of up to 21 days before embarking.

Not all Reagan strike group sailors have completed their sequestrations. Some remain under restricted movement orders at bases across Japan “to maximize readiness and protect the health of the force,” Task Force 70 spokesman Lt. Cmdr. Sean Brophy said in an email Thursday to Stars and Stripes. The task force is the 7th Fleet’s battle arm.

“In accordance with U.S. Pacific Fleet guidance, [restriction of movement] is necessary to protect our sailors and their families; prevent the spread of the [coronavirus] to U.S. forces, allies, partners and the community; and ensure [the Ronald Reagan Carrier Strike Group] warfighting readiness to accomplish assigned missions,” he said.

In his message, Gilday acknowledged that “we are asking a lot of our sailors and families right now” with the pre-underway sequestrations and deployment extensions for ships already underway as the pandemic rages on.

“These sacrifices are necessary to maintain a healthy force around the world,” he said. “I appreciate your commitment to selfless service.”

The Reagan is now the only U.S. aircraft carrier out of port in the Western Pacific. The USS Theodore Roosevelt was sidelined in Guam on March 26 after several of its crew members contracted the coronavirus.

Thousands of sailors disembarked the Roosevelt and isolated in hotel rooms for nearly a month as the carrier was sanitized and all crew members were tested for the virus.

The amphibious assault ship USS America, smaller than the Reagan but carrying F-35B Lightning II stealth strike fighters, is also at sea in the Western Pacific, according to its official Facebook page.

More than 1,150 Roosevelt sailors tested positive for the coronavirus by early May, according to the Navy. Crews who tested negative three times were allowed back on the carrier on April 29. It remains unclear when it will redeploy.