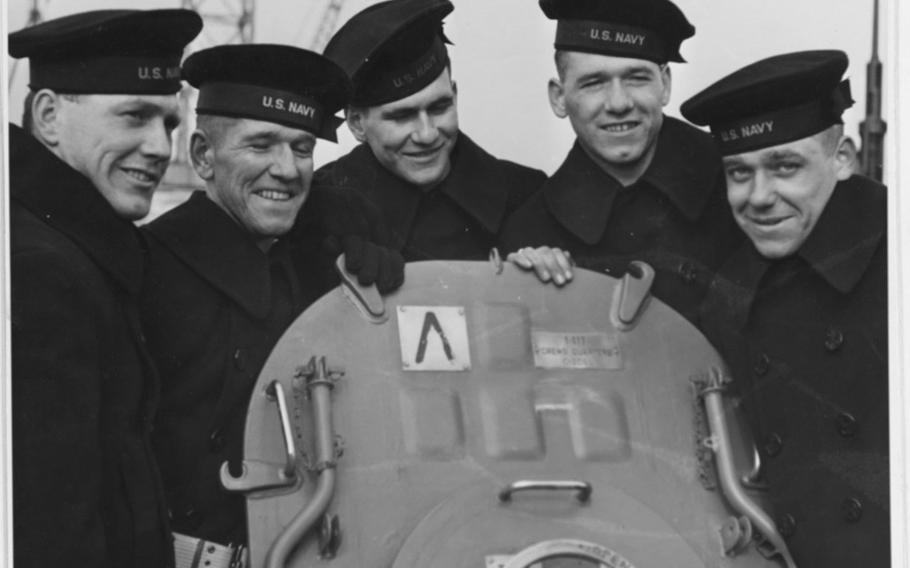 The Sullivan brothers pose aboard the USS Juneau during its commissioning ceremony in New York, Feb. 14, 1942. The brothers are, from left to right, Joseph, Francis, Albert, Madison and George. (U.S. Naval History and Heritage Command Photograph)

The Sullivan brothers pose aboard the USS Juneau during its commissioning ceremony in New York, Feb. 14, 1942. The brothers are, from left to right, Joseph, Francis, Albert, Madison and George. (U.S. Naval History and Heritage Command Photograph) 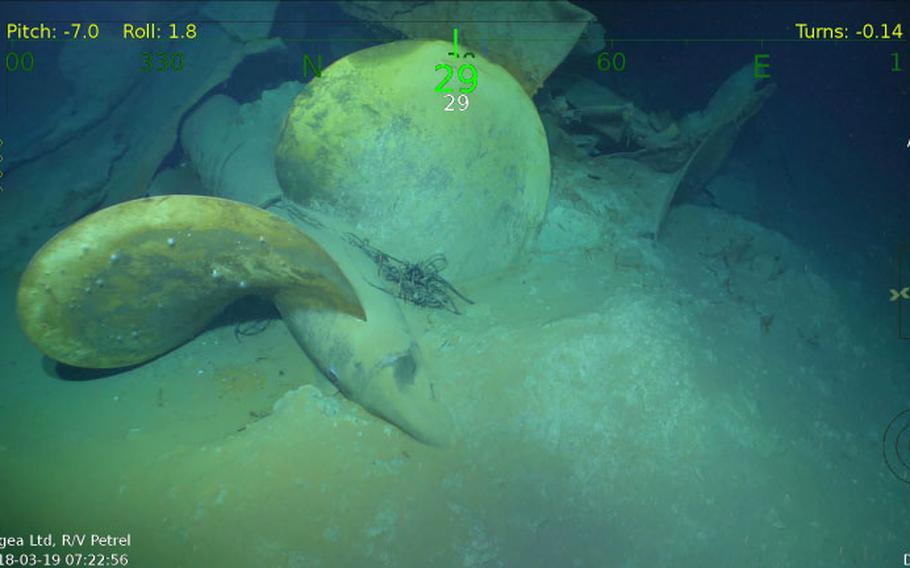 The wreckage of the USS Juneau, sank by the Japanese in 1942, was recently discovered more than two miles below the surface off the Solomon Islands. (Paul Allen photo) 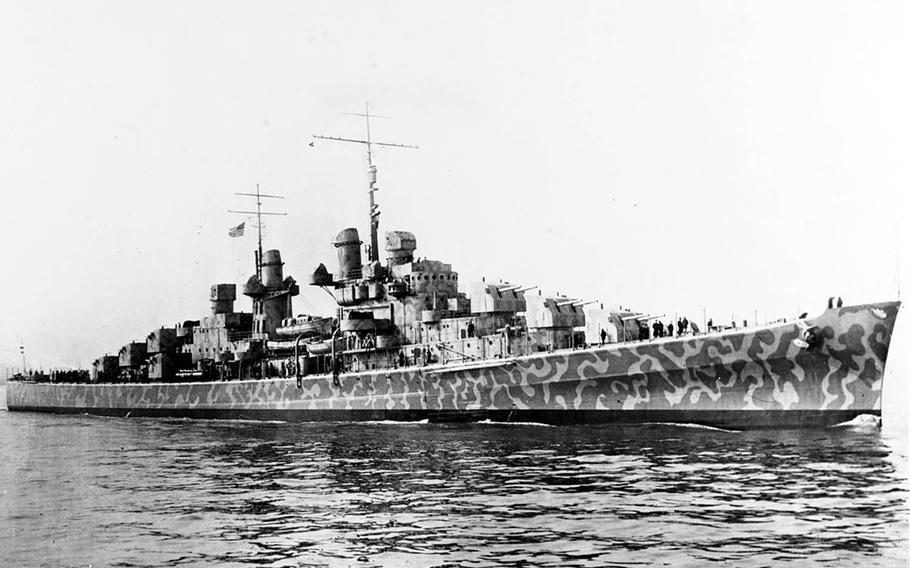 The USS Juneau become a symbol of wartime sacrifice after it was sunk by a Japanese torpedo during the Battle of Guadalcanal in 1942. (Courtesy of the National Archive) 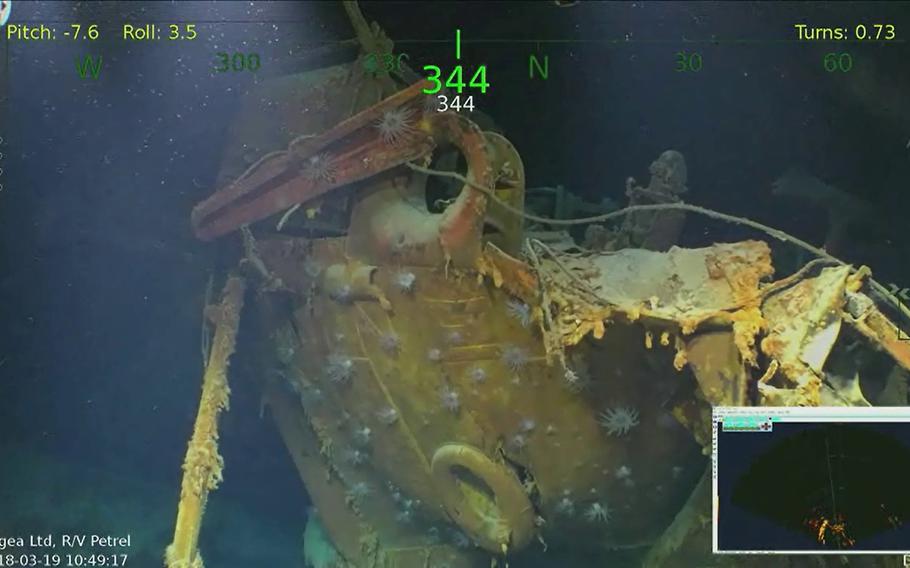 This Monday, March 19, 2018, underwater video image courtesy of Paul Allen shows wreckage from the USS Juneau, a U.S. Navy ship sunk by the Japanese torpedoes 76 years ago, found in the South Pacific. (Paul Allen via AP) 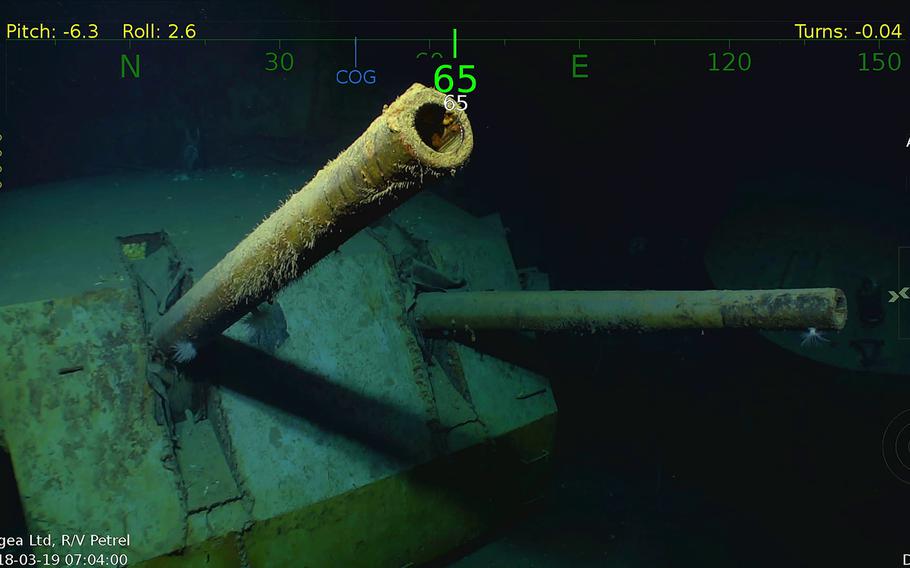 A Monday, March 19, 2018, underwater video image courtesy by Paul Allen shows wreckage from the USS Juneau, a U.S. Navy ship sunk by the Japanese torpedoes 76 years ago, found in the South Pacific. (Paul Allen via AP)

During World War II the “Fighting Sullivan Brothers” became some of the most famous enlisted service members in the Armed Forces. Nearly 75 years later, billionaire Microsoft co-founder Paul Allen has announced the discovery of the warship on which the five brothers and nearly 690 of their shipmates were lost.

The USS Juneau – an Atlanta-class light cruiser – was discovered on St. Patrick’s Day about 2.6 miles beneath the surface in the Solomon Islands, according to a statement on Allen’s website. The Juneau was sunk by a Japanese torpedo in November 1942 during the Battle of Guadalcanal. Only 10 sailors survived.

The Juneau has become identified with the story of the Sullivan brothers, members of a close-knit Irish-American family from Waterloo, Iowa. They enlisted in the Navy shortly after Pearl Harbor on condition they be allowed to serve together. Their patriotism was celebrated in the early months of the war — a time when government was calling for sacrifice.

But no other family suffered such a heavy loss during the war, and their deaths led to a policy of discharging servicemembers who were the only surviving members of their family.

Two Navy ships, including an active guided-missile destroyer, have been named in the brothers’ honor. They were also celebrated in a 1944 movie, “The Fighting Sullivans,” aimed at honoring sacrifice at the height of the war.

The ship was first identified Saturday by an autonomous underwater vehicle aboard the Research Vessel Petrel, according to a statement from Allen. The crew deployed its remotely operated underwater vehicle the next day and recorded the first images of the wreckage.

“We certainly didn’t plan to find the Juneau on St. Patrick’s Day. The variables of these searches are just too great,” Robert Kraft, director of subsea operations for Paul Allen, said in the statement. “But finding the USS Juneau on Saint Patrick’s Day is an unexpected coincidence to the Sullivan brothers and all the service members who were lost 76 years ago.”

Naval Surface Forces commander Vice Adm. Rich Brown, who once helmed the USS The Sullivans, said he was excited to hear that Allen’s team was able to find the cruiser. “The story of the USS Juneau crew and Sullivan brothers epitomize the service and sacrifice of our nation’s greatest generation,” he said in the statement.

Short service historyThe Juneau was commissioned on Feb. 14, 1942, only about nine months prior to its sinking, according to the Navy. After a short spring patrol of the Atlantic coast, it was sent on a blockade patrol of the Martinique and Guadeloupe islands to prevent the escape of Vichy French naval units. The ship then returned to New York “to complete alterations.”

The cruiser operated in the North Atlantic and Caribbean from June through August on patrol and escort duties. It was then dispatched to the Pacific where it participated in several battles and combat actions, including the decisive Battle of Santa Cruz Island on Oct. 26.

On Nov. 8, 1942, the Juneau departed Noumea, New Caledonia, to escort reinforcements to Guadalcanal under Rear Adm. R. K. Turner’s Task Force 67, the Navy said. They arrived on the morning of Nov. 12, and the Juneau took up its position as a protective screen for the transports and cargo vessels.

After reports came in that a large Japanese force was headed for the island, an American attack group of cruisers and destroyers left Guadalcanal to engage the 18 to 20 Japanese vessels, including 2 battleships, the Navy said. Though outnumbered and outgunned, the group fought valiantly. The Juneau teamed with the USS Atlanta to sink an enemy destroyer “as the two forces slugged it out at close range.”

But the Juneau’s port side was hit by a torpedo, forcing it to withdraw just before noon on Nov. 13, the Navy said. A Japanese submarine launched three torpedoes as the Juneau limped alongside the severely damaged USS San Francisco. The Juneau avoided two of the bombs but was struck by the third.

“There was a terrific explosion; Juneau broke in two and disappeared in 20 seconds,” the Navy said. “The gallant ship with Captain [Lyman] Swenson and most of her crew, including the five Sullivan brothers, was lost.”

The American task force did not stay to check for survivors, the Navy said. They fled the scene because of the risk of further Japanese attacks and due to the Juneau’s abrupt sinking, leaving as many as 115 crew in the water, including as many as two of the Sullivan brothers.

They would not return for several days. Only 10 members of the crew were rescued from the water eight days after the sinking.

‘Keep us together’The Sullivan brothers – Albert, Francis, George, Joseph and Madison – entered World War II soon after a friend was killed on the USS Arizona during the Pearl Harbor attack on Dec. 7, 1941, the Navy said. They enlisted on the day after Christmas, requesting to be stationed together.

“As a bunch, there is no-body that can beat us,” George Sullivan wrote in a letter asking that they not be separated. “We would appreciate it very much if you could, if possible keep us together.”

The Navy granted that request and sent all five brothers to the Juneau. They were present for the cruiser’s commissioning at Brooklyn Navy Yard, where they were touted as an example of patriotism in a country now mobilizing for war. The Navy took an iconic photo of the five brothers holding one of the ship’s hatches during the ceremony.

After their deaths, their mother, Alleta, continued to support the war effort and the Sullivan family became synonymous with sacrifice, the Navy said. President Franklin D. Roosevelt sent the family a personal letter expressing his sorrow and the nation’s deepest sympathies. Their surviving sibling, Genevieve, enlisted in the WAVES in 1943 and died in 1975.

Since deploying in 2017, the Petrel has made several discoveries of military ships, including wreckage from the USS Ward, which fired the first shot of World War II at Pearl Harbor. In August, it found the USS Indianapolis, which delivered parts for the first atomic bomb ever used in combat.

Earlier this month, the crew discovered the USS Lexington, the first aircraft carrier sunk during WWII. The wreckage rested about 500 miles off the eastern coast of Australia and about two miles below the water’s surface.