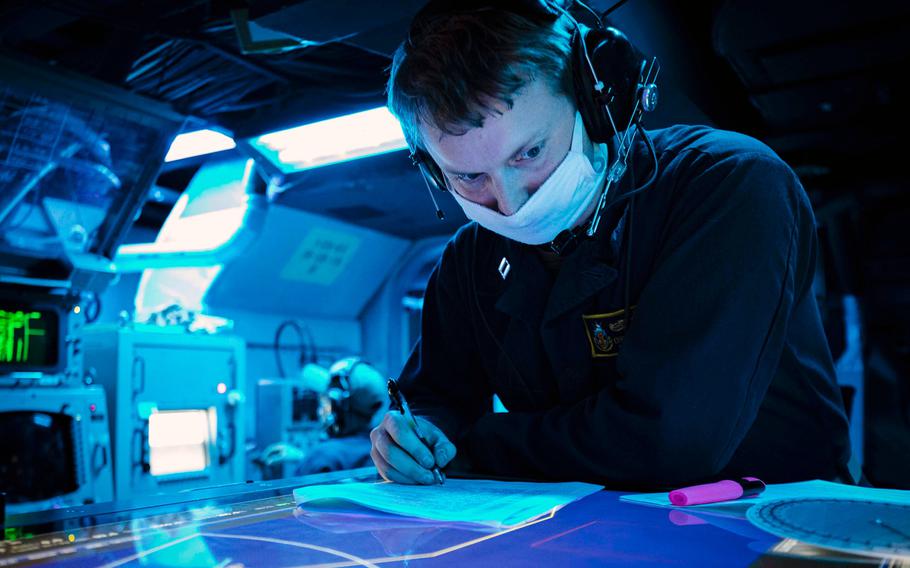 YOKOSUKA NAVAL BASE, Japan — The guided-missile destroyer USS John S. McCain last week practiced anti-submarine warfare with a French submarine and Japanese carrier in the Philippine Sea, according to a Navy statement Friday.

France’s nuclear-powered submarine FS Emeraude and support and assistance vessel FS Seine, along with Japan’s helicopter destroyer JS Hyuga, practiced anti-submarine warfare tactics with the McCain, “strengthening cooperative efforts to support maritime security in the Indo-Pacific,” according to the Navy.

While the Navy frequently trains with the Japan Maritime Self-Defense Force, “it is a rare opportunity for U.S. Navy maritime forces to conduct operations with their French Navy counterparts in the 7th Fleet area of operations,” according to the statement.

The exercise further demonstrated “the breadth, depth and value of our network of allies and partners,” McCain skipper Cmdr. Ryan T. Easterday said in the statement.

The sub and its tender paid a port call at Guam Naval Base in late November, according the Naval News website. The 241-foot-long Emeraude, commissioned in 1988, has a crew of 70, according to the Seaforces-online.org website.

McCain weapons officer Lt. Ryan Mati in the statement said the opportunity to work with a partner nation’s submarine enhanced the crews “tactical mindset” and allowed them to “execute some of the best training in this warfare area.”

Anti-submarine warfare is a cornerstone in surface Navy operations, Mati said in the statement. “This exercise not only allow(ed) us to continue strengthening our warfighting readiness with a long-standing ally, it’ll also impart a unique experience for the crew.”

It was the first time Japanese naval forces had exercised with the Emeraude, the Escort Division 3 commander, Capt. Hamasaki Shingo, said in the statement.

“Agile and advanced anti-submarine capabilities utilizing shipboard aircraft are an essential part of our maritime operations,” Shingo said in the statement. “This trilateral exercise with the United States Navy and the French Navy not only develops tactical skills but also contributes to a ‘free and open Indo-Pacific’ based on the rule of law and freedom of navigation.”

Shingo added that the Japanese naval forces would “continue to pursue the opportunities to conduct an exercise with our partner navies.”

The three nations plan further exercises on land and at sea in May, according to Reuters news service Dec. 6.

According to Reuters, Adm. Pierre Vandier, chief of staff of the French navy, told the Sankei newspaper that France shares U.S. and Japanese concerns over Chinese ambitions in the South and East China seas.