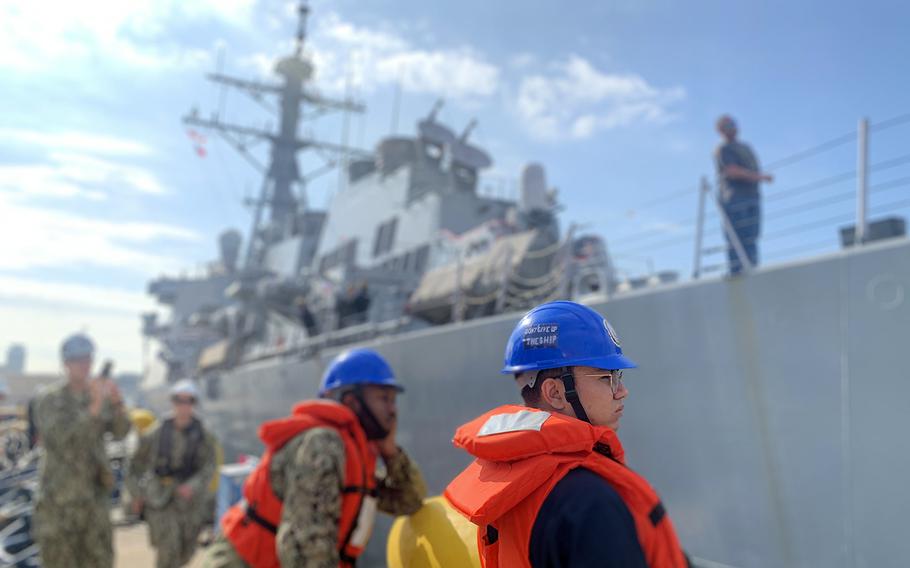 A sailor watches as the USS John S. McCain pulls away from Yokosuka Naval Base, Japan, Monday, Oct. 28, 2019. On his helmet, a blue "Don't Give Up the Ship" sticker uses the same phrase McCain sailors adopted for their flag honoring those killed in the destroyer's August 2017 collision. (Caitlin Doornbos/Stars and Stripes)

A sailor watches as the USS John S. McCain pulls away from Yokosuka Naval Base, Japan, Monday, Oct. 28, 2019. On his helmet, a blue "Don't Give Up the Ship" sticker uses the same phrase McCain sailors adopted for their flag honoring those killed in the destroyer's August 2017 collision. (Caitlin Doornbos/Stars and Stripes) Sailors aboard the USS John S. McCain prepare for the guided-missile destroyer to leave Yokosuka Naval Base, Japan, Monday, Oct. 28, 2019, for the first time since a deadly collision more than two years ago. (Christian Lopez/Stars and Stripes) The USS John S. McCain departs Yokosuka Naval Base, Japan, Monday, Oct. 28, 2019, for the first time since it was involved in a deadly collison in August 2017. (Christian Lopez/Stars and Stripes) 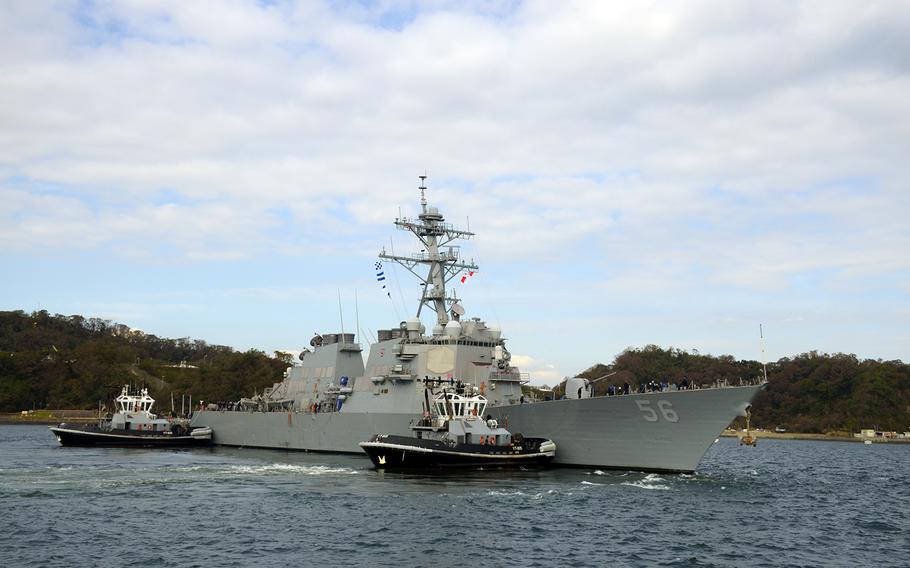 Tugboats guide the USS John S. McCain from the pier Monday, Oct. 28, 2019, as the destroyer departs Yokosuka Naval Base, Japan, for the first time since a collision that killed 10 sailors in 2017. (Christian Lopez/Stars and Stripes) 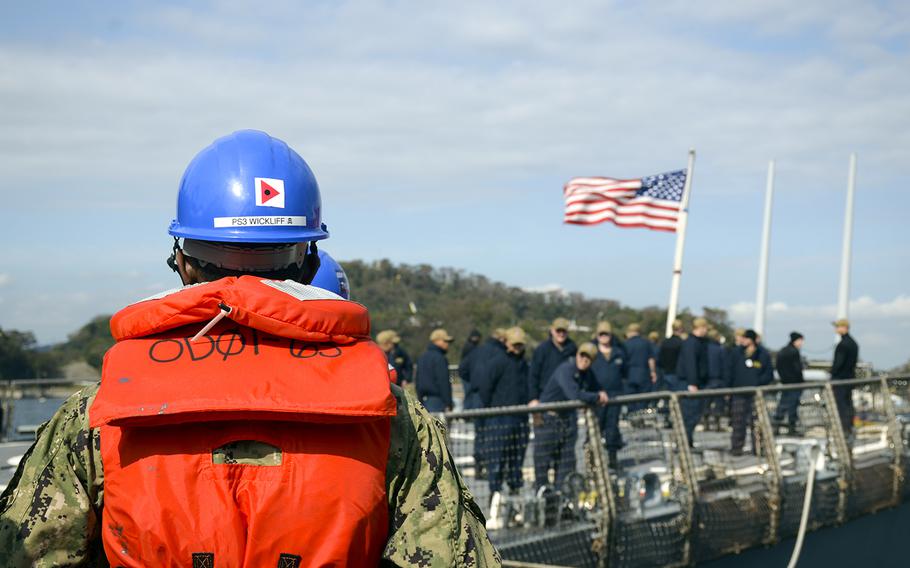 A sailor watches as the USS John S. McCain prepares to lower the flag from its stern and raise it on the mast to signify that it's officially underway at Yokosuka Naval Base, Japan. Monday, Oct. 28, 2019. (Christian Lopez/Stars and Stripes) The USS John S. McCain departs Yokosuka Naval Base, Japan, Monday, Oct. 28, 2019, for the first time since suffering significant damage in a fatal collision more than two years ago. (Christian Lopez/Stars and Stripes)

YOKOSUKA NAVAL BASE, Japan — The USS John S. McCain sailed away from the Yokosuka pier about 10:15 a.m. Monday, its first trip to sea since suffering hundreds of millions of dollars in damages during a fatal collision in 2017.

As the American flag shifted from aft to midship, signaling the ship was underway, families of the sailors who’d worked over the past two years to get the guided-missile destroyer back to sea stood in awe.

“After all the repairs, they’ve been working toward this. It’s a sense of accomplishment,” said Jamie Peevy, whose husband, Petty Officer 1st Class Robert Peevy, serves as a fire controlman on the ship. “We want them home, but they’re sailors — they want to be at sea.”

The Arleigh Burke-class guided-missile destroyer is undergoing sea trials, a Navy term for a comprehensive set of at-sea testing of systems including “navigation, damage control, mechanical and electrical systems, combat systems, communications, and propulsion application,” according to a Navy statement Monday.

Sea trials typically last about a week and are required for every ship returning to sea after extended repairs or maintenance.

The McCain on Aug. 21, 2017, collided near Singapore with the Alnic MC, a commercial oil tanker, which impaled itself into the McCain’s port side.

Confusion among watch standers led to a loss of steering control, and the destroyer crossed into the tanker’s path, according to post-collision reports. The impact crumpled a berthing area and caused heavy flooding, killing 10 sailors.

Peevy said her family arrived in Yokosuka two years ago just after the McCain collision happened.

“It was scary, like ‘Oh this is the ship that my husband is going to be on?’” Peevy said.

Her friend, Christina Ellison, said some of that anxiety spilled into Monday as her husband, Petty Officer 2nd Class Zephrim Ellison, sailed away on the ship.

“There’s always that little part of me that’s uneasy,” Christina Ellison said. “Is it ready?”

The McCain was the second U.S. destroyer involved in a fatal collision that summer. On June 17, 2017, the USS Fitzgerald collided with a Philippine-flagged container ship, the ACX Crystal, about 60 nautical miles southwest of Yokosuka. Seven sailors were killed in that incident.

The Fitzgerald has been undergoing repairs at Pascagoula, Miss., where it left dry dock in April. A return-to-sea date has not been announced.

'Big day'The McCain’s departure Monday means it has completed its necessary repairs and upgrades, which included about 11 months in dry dock. It has been undergoing additional maintenance and crew training while moored to the base pier since it left dry dock last November.

As it sailed away for the first time in two years, sailors, crews and contractors not on board flocked to the edge of the ship’s berth to take photos with the destroyer. Cheers went up as two tugboats pulled away from the ship to leave it under its own power.

“You got it!” he hollered to crews onboard as they prepared the McCain to leave its berth.

Murphy, who oversaw most of the McCain repairs while serving on the ship from December 2017 to July 2019, said he “wouldn’t miss” the “big day.”

“I wouldn’t say it’s closure, but it’s a new beginning,” he told Stars and Stripes. “This is the culmination of thousands of peoples’ work. You can’t name a Navy entity who hasn’t touched a part of getting this crew together to go out and do what they’re going to do today.”

Murphy, reflecting on the work accomplished since the ship returned to Yokosuka severely damaged in December 2017, said sailors had been looking forward to this moment for a long time.

'Eager to get back to sea'The ship completed its in-port phase of training and will continue “basic phase” training at sea over the coming months “to certify in every mission area the ship is required to perform and prepare for return to operational tasking,” according to the Navy statement.

"This whole crew is eager to get back to sea, and that's evident in the efforts they've made over the last two years to bring the ship back to fighting shape, and the energy they've put into preparing themselves for the rigors of at-sea operations," Cmdr. Ryan Easterday, the McCain’s commanding officer, said in the statement.

Secretary of the Navy Richard Spencer, during the ship’s re-commissioning in July 2018, told Stars and Stripes he expected it to return to sea in spring 2019. That timeline was moved to the fall, Murphy told an audience aboard the ship during a July 2 change-of-command ceremony attended by Cindy McCain, widow of the late U.S. Sen. John McCain, one of the ship’s three namesakes.

In July, 7th Fleet spokesman Lt. Joe Keiley said the ship’s port shaft was misaligned “likely due to the August 2017 collision,” causing a delay in the McCain’s return to sea. At the time, he said repairs would be completed in October with remaining work continuing in the base’s Ship Repair Facility in November.

On Monday, Keiley said the issue was corrected, enabling the 25-year-old McCain to steam away on Monday.

The destroyer is named after the late senator from Arizona, and his father and grandfather, both Navy admirals. All three share the same name. The two elder McCains were both at the ceremony on Sept. 2, 1945, aboard the USS Missouri when Japan surrendered to the United States at the end of World War II.

It is one of six guided-missile destroyers homeported in Yokosuka under the operation of the 7th Fleet.doornbos.Caitlin@stripes.com Twitter: @CaitlinDoornbos