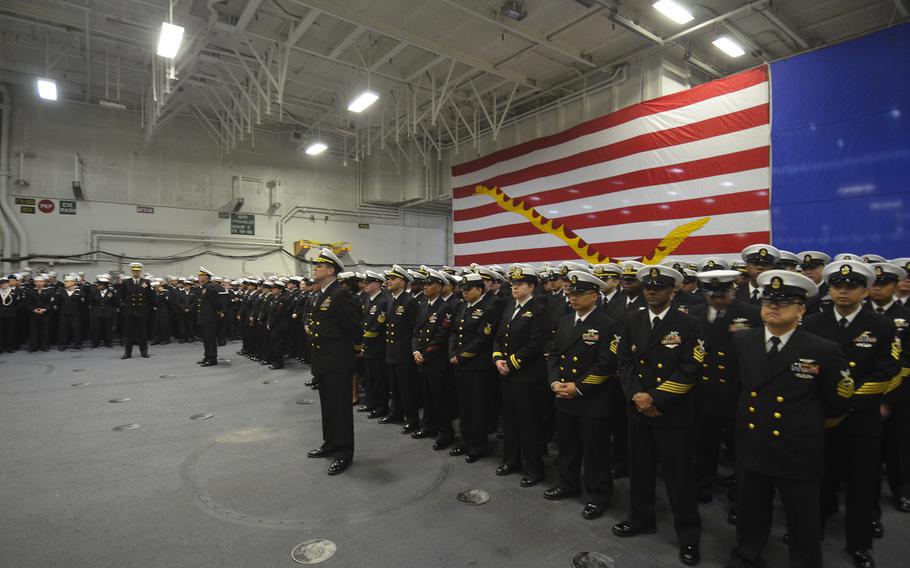 Sailors of the aircraft carrier USS George Washington await the arrival of their new commander aboard the hangar deck Friday. Capt. Greg Fenton handed over command to Capt. Timothy Kuehhas, who will see the ship through a multiyear refueling and overhaul. (Erik Slavin/Stars and Stripes)

Sailors of the aircraft carrier USS George Washington await the arrival of their new commander aboard the hangar deck Friday. Capt. Greg Fenton handed over command to Capt. Timothy Kuehhas, who will see the ship through a multiyear refueling and overhaul. (Erik Slavin/Stars and Stripes) 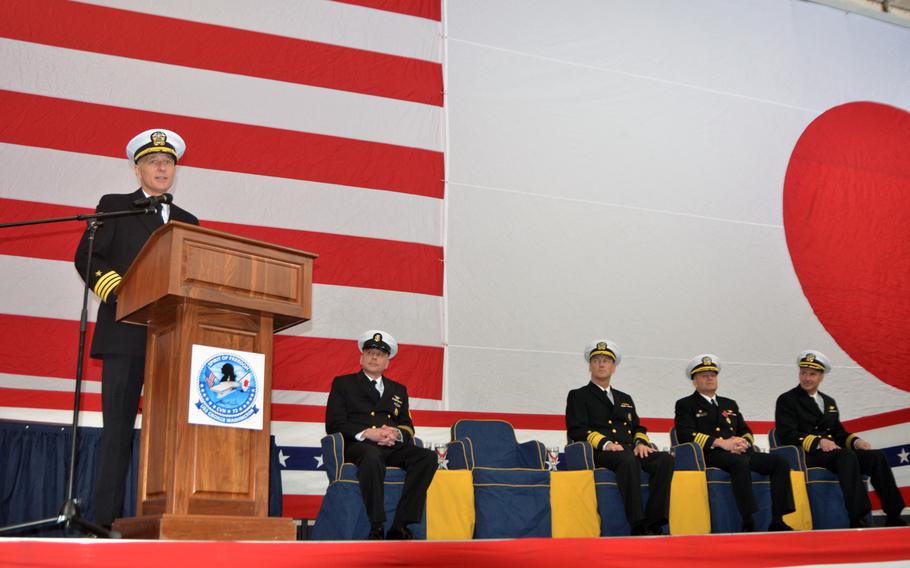 Capt. Timothy Kuehhas addresses the gallery in the USS George Washington's hangar deck, just prior to assuming command of the ship on Jan. 30, 2015. Kuehhas is tasked with preparing the ship for a multibillion-dollar refueling and overhaul after it returns to the United States later this year. (Erik Slavin/Stars and Stripes)

YOKOSUKA NAVAL BASE, Japan — The captain slated to guide the aircraft carrier USS George Washington through a crew swap with the USS Ronald Reagan later this summer took command of his ship Friday.

Navy officials said Friday that the hull swap is scheduled for late summer in San Diego following a maintenance period and a planned Western Pacific patrol. Most of the George Washington’s crew will transfer to the Reagan in San Diego, then continue their patrol before bringing the carrier back to its new Yokosuka home port.

Kuehhas will remain with George Washington as it transits to Virginia, where it will begin a multibillion-dollar refueling and complex overhaul that is expected to take as long as four years to complete.

“There is extra effort that goes into preparing George Washington for the overhaul,” Kuehhas said.

The main effort will be inspecting the 1,092-foot ship for areas that may need added maintenance work.

“We will basically take the ship down to bare metal,” Kuehhas said.

There will be very little gap between George Washington’s Western Pacific tour and USS Ronald Reagan’s transit toward the region, said a Navy official familiar with the ship’s plans.

When the Navy announced the hull swap last year, some media outlets reported that Japanese lawmakers were concerned about a potentially long period with no U.S. aircraft carrier presence in the region.

In December, President Barack Obama signed a congressional spending bill that provided the initial funding for George Washington’s overhaul. Prior to that, some in Congress and the Pentagon were considering decommissioning the ship due to budget shortfalls.

USS George Washington was commissioned in 1992 and is approaching the middle of its expected length of service.

Fenton later cited the mission as a highlight of his tenure.

“We sailed as fast as we could and we were on scene ready to operate,” Fenton told Stars and Stripes. “And I think our presence there saved many lives.”