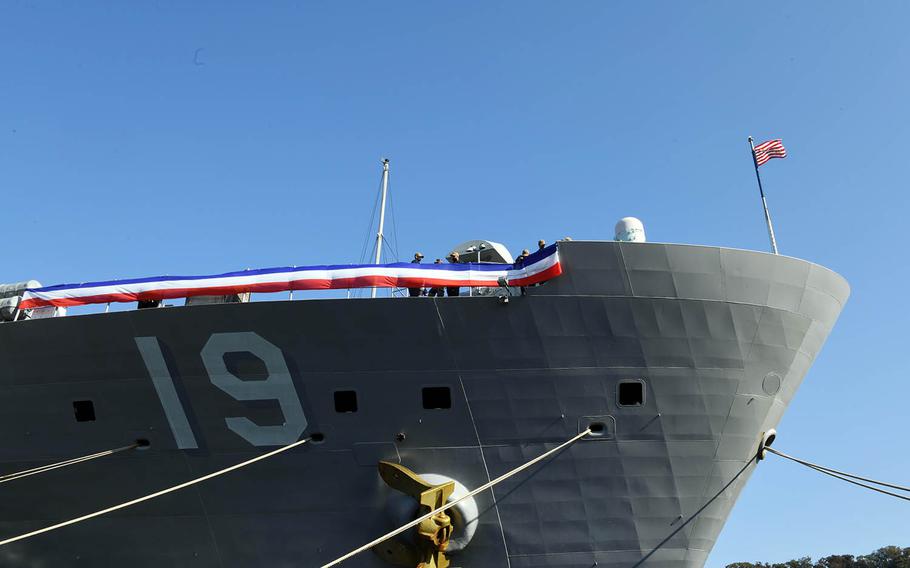 YOKOSUKA NAVAL BASE, Japan — The Navy’s oldest operational warship turned another year older on Saturday, marking a half-century of service on the seas.

The 7th Fleet flagship USS Blue Ridge over the weekend commemorated the 50th anniversary of its commissioning on Nov. 14, 1970, according to a Navy statement on Saturday. The command ship has been stationed in Yokosuka since 1979.

“There is no better ship to support us as our flagship,” 7th Fleet commander Vice Adm. Bill Merz said in the statement.” Year after year she has enabled operations of the largest forward fleet, while at the same time participating in enduring joint service and multi-national exercises and supporting disaster relief operations.”

Merz added: “Everyone knows Blue Ridge; she has a rich history here in the region.”

Commissioned at the Philadelphia Naval Shipyard, the ship was the first of the Navy’s two Blue Ridge-class amphibious command ships, which also includes the 6th Fleet’s USS Mount Whitney, according to the Navy. At about 19,000 tons, it can accommodate about 1,200 enlisted and 250 officers.

The Blue Ridge is likely to keep its oldest-operational ship title at least another 18 years. Its service life was extended an additional two decades after completing a 23-month maintenance period in May 2018.

The 223-year-old frigate USS Constitution is the Navy’s oldest commissioned warship, but its mission is education and outreach in Boston Harbor.

Command ships are used as central planning vessels for fleet leaders. During peacetime, they are often used for diplomatic engagements and humanitarian efforts.

Before the coronavirus pandemic, the Blue Ridge made frequent port visits, bringing 7th Fleet leadership to regional nations to send messages of support to allies and partners. In 2019, it visited 11 ports in nine Indo-Pacific countries during a four-month patrol.

In January, the Blue Ridge stopped in Japan, South Korea and Thailand before the Navy halted port visits in response to the coronavirus’s spread.

The ship later broke its personal days-at-sea record with 70 days in a row without a port visit before returning from deployment in June. Its prior at-sea record of 64 days was set in 1972 during the Vietnam War.

The Blue Ridge also participates “in numerous annual U.S. and allied training exercises, routine patrols and special operations,” according to the statement.

The Blue Ridge has a storied history of participation in humanitarian efforts in the Pacific. From 1979-1984, the ship rescued Vietnamese refugees off the coast of Vietnam as part of Operation Boat People, according to the statement. It also earned the Humanitarian Service Medal in 1980 for rescuing 91 refugees from two separate small boats in the South China Sea.

More recently, the ship was used in Operation Tomodachi, which provided disaster relief and supplies to Japan in the wake of the 2011 Tohoku earthquake and tsunami, according to the statement.

“Blue Ridge’s vital role and commitment is a testament of her enduring participation in joint service and allied exercises addressing humanitarian and security crisis in the region, in addition to the partnerships shaped over the years,” the Navy said.