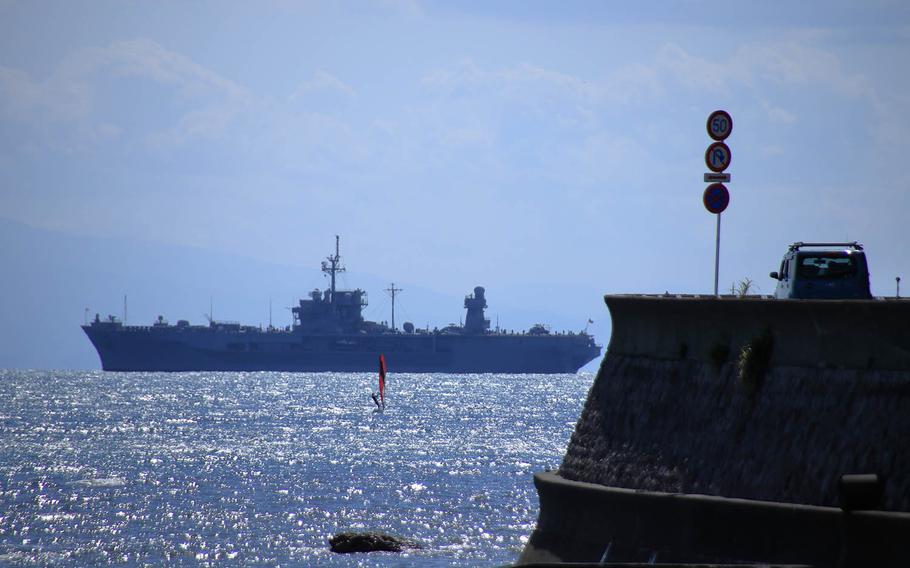 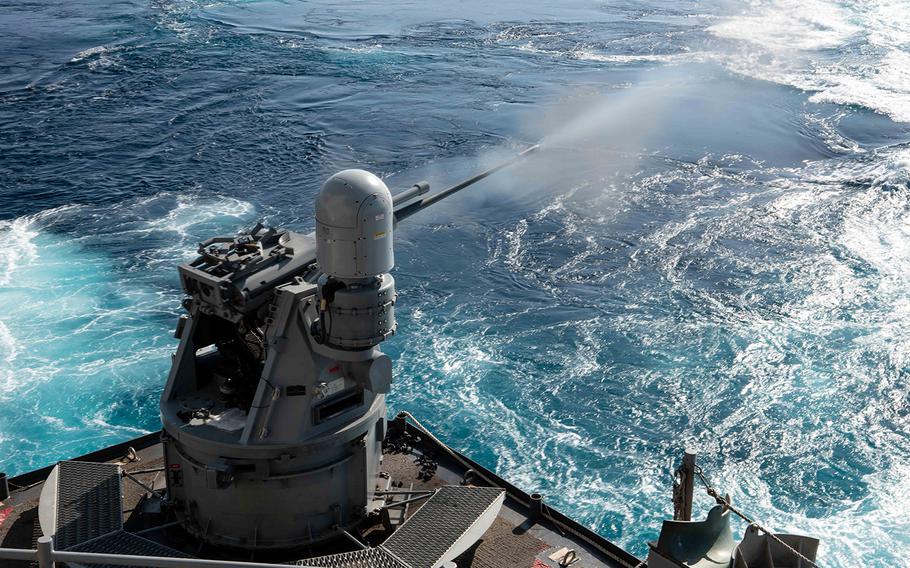 The USS Ronald Reagan fires a "Killer Tomato" from its fantail during an exercise in the Philippine Sea, May 15, 2020. (Gabriel Martinez/U.S. Navy)

YOKOSUKA NAVAL BASE, Japan — Typically known for frequent port visits, the 7th Fleet flagship USS Blue Ridge broke its 48-year-old record of consecutive days underway by remaining at sea to avoid the coronavirus, the Navy said in a statement Thursday.

The amphibious command ship had been at sea for 69 days as of Thursday, passing its previous record of 64 days, which was set during the Vietnam War. The Blue Ridge is the Navy’s oldest operational warship and has been in service for nearly half a century.

“These times are uniquely challenging for the entire world, but it takes an extremely dedicated crew to maintain this old of a ship at sea for this long,” Blue Ridge commander Capt. Craig Sicola said in the statement.

The 223-year-old USS Constitution is the Navy’s oldest ship, but it does not deploy.

Meanwhile, the Yokosuka-based aircraft carrier USS Ronald Reagan officially began its Indo-Pacific deployment this week. Its crew completed phased sequestrations before embarking the ship to mitigate the chance of bringing coronavirus-positive sailors on board, the Navy said in a separate statement Thursday.

“The [restriction-of-movement] period allowed fleet leadership the ability to monitor the health of the force in a controlled facility and build a safe environment for sailors to accomplish assigned missions at sea,” the statement said.

More than 1,000 tons of ordnance, 5,000 crewmembers and more than 60 aircraft were moved aboard the carrier for the deployment, the Navy said.

Like the Blue Ridge, the Reagan is unlikely to make port visits so soon after the virus sidelined the aircraft carrier USS Theodore Roosevelt for nearly two months this spring, according to an April 22 report in The New York Times. An outbreak among a few Roosevelt sailors in March led to more than 1,150 of their shipmates testing positive for the coronavirus.

The Roosevelt returned to sea on Thursday with a reduced crew.

As the 7th Fleet’s flagship, the Blue Ridge typically makes more port visits than other vessels in the fleet. It visited 11 ports in nine Indo-Pacific nations during its 114-day deployment last spring.

During that deployment, the Blue Ridge hosted more than 30 foreign leaders and brought foreign navy representatives on board for professional exchanges, the Navy said when the ship returned to Yokosuka last May.

This year, however, the crew had to tweak its plans as the coronavirus — first reported in Wuhan, China, on Dec. 31 — grew from a regional outbreak into a global pandemic as the ship was out to sea.

The Blue Ridge’s deployment this year began normally enough. After leaving Yokosuka in January, the crew made stops in Japan, South Korea and Thailand in its first month underway before port visits were canceled in response to the virus’s spread.

Sicola said that while the pandemic cast a shadow on the patrol, the crew “has been amazing.”

“I realize every day how tough it has been, especially for some who have lost loved ones, or who have families that have endured challenging events during this pandemic,” he said in the statement. “Even through all that, their heads are high and they have taken great pride in Blue Ridge’s historic underway during her 50th year of service.”