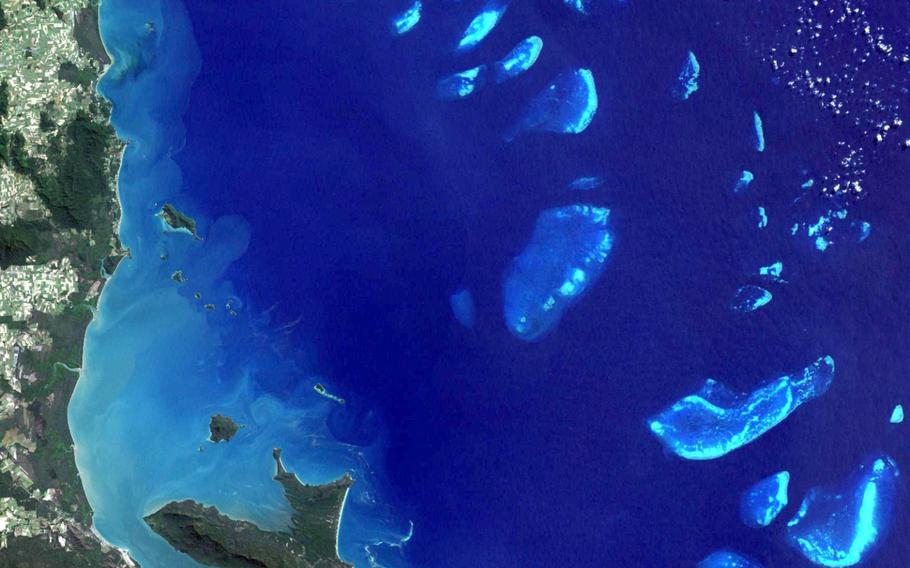 Stretching more than 1,200 miles along the Queensland coast, the Great Barrier Reef, was inscribed on the World Heritage List in October 1981. One of Australia's greatest assets is the magnificent reef which runs along virtually the entire coast of Queensland. (Courtesy Defense Department)

Park authority officials, ordnance experts and others are all investigating whether it is worth recovering the bombs, which lie about 180 feet deep on a sandy ocean floor.

“If decision is made to recover those weapons, then the U.S. Navy will work closely with the Australian Navy to do that,” Swift said.

The jets took off from the Sasebo-based USS Bonhomme Richard as part of Talisman Saber 2013, a biannual exercise including 21,000 U.S. servicemembers and about 7,000 Australian servicemembers. They intended to drop their bombs at the Townshend Island Range, which is about 450 miles north of Brisbane along the Queensland coast.

When controllers said the area wasn’t clear, the Harrier mission commander designated an emergency jettison area about 18 miles south of Bell Cay, away from the coral reef, according to a Navy statement.

The plane fuel tanks were taxed by the extra bomb weight, and the pilots would not have been able to land safely with the amount of ordnance they were carrying, according to a Navy statement.

Two of the bombs were inert, or explosive-free, while the other two were dropped unarmed, the statement added.

Swift said the location was chosen to minimize damage to the environment and shipping areas.

He added that while the incident was unfortunate, the Navy plans for such contingencies in its air operations.

“Weather can be unpredictable, there are mechanical failures … so this is not an unanticipated event,” said Swift, who rose through the Navy’s ranks as a pilot.

Great Barrier Reef Marine Park stretches over 133,000 square miles off Australia’s east coast. The reef itself stretches for more than 1,400 miles, according to the park website.

Following announcement of the incident on Saturday, environmental and anti-war activists who were protesting the Talisman Saber exercise since it began July 15 heaped criticism on the U.S. military’s actions, according to The Associated Press.

The mishap proved that the U.S. military could not be trusted to protect the environment, demonstrator Graeme Dunstan told AP.

“How can they protect the environment and bomb the reef at the same time? Get real,” Dunstan said from the Queensland coastal town of Yeppoon, a town just south of Townshend Island Range.

Despite the protests, a poll released in June by the Lowy Institute indicated support for the U.S.-Australia alliance at 82 percent. Basing U.S. forces in Australia was favored by 61 percent, up six points from two years ago.