US, UK and Japan scheduled to conduct submarine hunting exercise 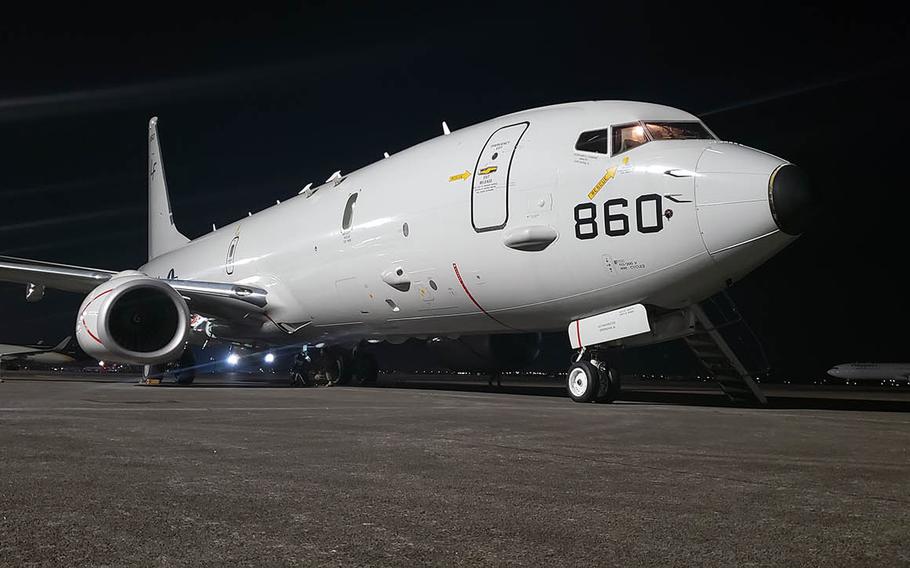 A P-8A Poseidon of Patrol Squadron 16, like the one shown here Jan. 20, 2019, will take part in a three-nation anti-submarine warfare exercise in the western Pacific starting Thursday, March 14, 2019. (Alan Johnson/U.S. Navy)

The U.S. Navy, Royal Navy and Japanese Maritime Self-Defense Force are scheduled to start anti-submarine warfare drills Thursday for only the second trilateral exercise of its kind in the western Pacific.

Patrol Squadron 16 will send a P-8A maritime patrol aircraft to operate alongside the Royal Navy frigate HMS Montrose and from the JMSDF the destroyer JS Murasame, a P-1 aircraft and a submarine, according to a Navy statement Tuesday.

“The Royal Navy, Japan Maritime Self-Defense Force, and United States Navy all support a free and open Indo-Pacific,” Capt. Brian Erickson, commander, Task Force 72, said in the statement. “Exercises like this demonstrate our nation’s resolve in the region, while improving interoperability, maintaining readiness and learning best practices from one another.”

The three maritime forces have trained together in multilateral exercises such as Rim of the Pacific, but this is only the second time for this kind of exercise in the region.

The allies first came together in December for a two-day submarine-hunting exercise by the Royal Navy’s oldest serving frigate, HMS Argyll, and the JMSDF helicopter destroyer JS Izumo in the Philippines, according to the statement. A Navy submarine also took part, the Navy said at the time.

“The improvement of our tactical skillset is expected throughout” the exercise,” Cmdr. Shusaku Okada, commanding officer of JS Murasame, said in the statement. “I also hope that further cooperation be strengthened with the Royal Navy, the United States Navy, and the mutual understanding be deepened.”

Prior to meeting the western Pacific for the anti-submarine warfare exercise, U.S. and British ships conducted a search-and-seizure drill in the South China Sea and also trained for a replenishment at sea.

“HMS Montrose has been operating in the Pacific since December 2018, and our upcoming exercise with our allies in the USN and JMSDF will be one of the highlights of our time in this important region,” Cmdr. Conor O’Neill, HMS Montrose commanding officer, said in the statement.