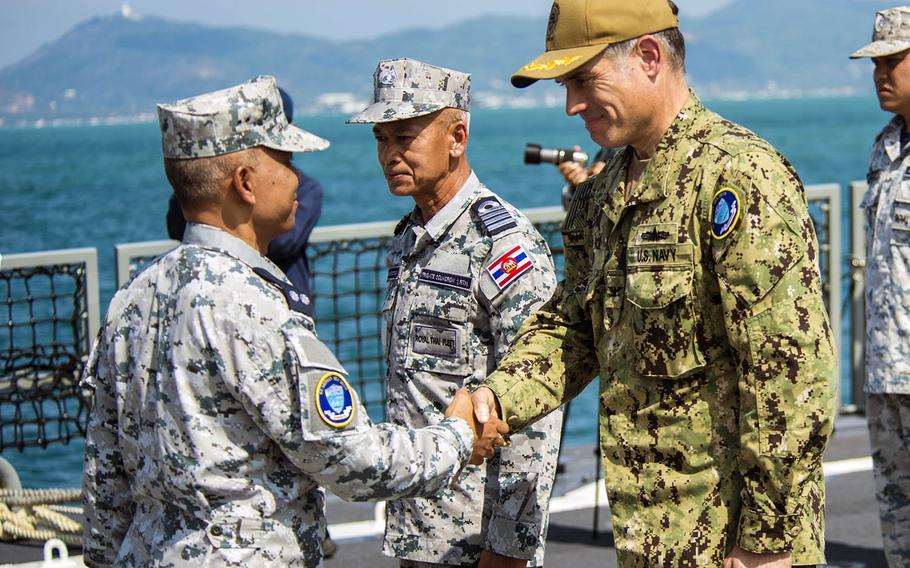 The U.S. Navy commenced Guardian Sea, its annual training exercise with the Royal Thai Navy, with a ceremony Sunday aboard the Thai frigate HTMS Bhumibol Adulyadej.

A Los Angeles-class fast attack submarine and a replenishment oiler, vessels the Navy declined to identify by name, joined two Thai frigates, a corvette and a Sea Hawk helicopter in several exercise scenarios, according to a Navy news release.

An annual event since 2012, the exercise, typically five days, is designed to test both navies’ readiness for anti-submarine warfare.

“Guardian Sea 2019 is a premier exercise that demonstrates our commitment to each other in ensuring that we are ready to counter any threats together, both above and underwater,” Capt. Matt Jerbi, commodore of Destroyer Squadron 7, said in the Navy statement.

Guardian Sea consists of a shore phase, in which experts meet and exchange information, and a sea phase, which focuses on the ability to track submarines while protecting surface ships, according to the Navy.

This year, for the first time, the Royal Thai Navy has deployed a towed-array sonar, a new capability for that country, according to the statement.

A towed-array sonar is a system pulled behind submarines or surface ships on a cable to enhance the vessel’s ability to detect submarines.

“Our ability to conduct anti-submarine exercises while implementing lessons learned, advanced tactics and procedures into each new iteration of Guardian Sea is a testament to the professionalism and interoperability of both U.S. Navy and Royal Thai Navy forces,” Lt. Josh Northcutt, U.S. Navy lead planner for the exercise, said in the statement.

Just before the exercise kicked off, the 7th Fleet flagship, USS Blue Ridge, made a port visit to Laem Chabang, Thailand, for the first time in three years.