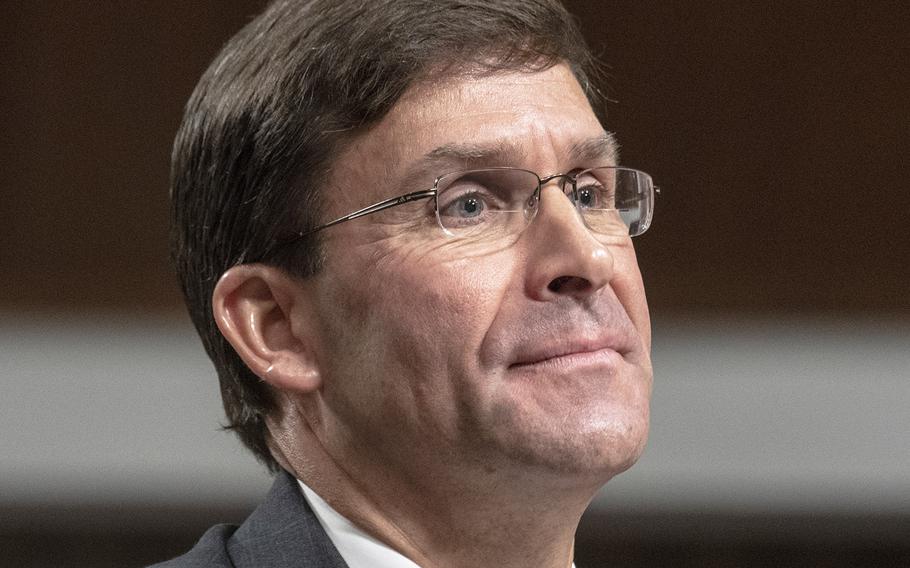 Esper said he didn’t see the move as a concession to the communist state but a “goodwill gesture” that he hopes North Korea will reciprocate by returning to nuclear talks.

The surprise decision came after North Korea issued statements lashing out at the upcoming joint U.S.-South Korean military exercise and warning that it’s running out of patience for Washington to soften its denuclearization demands.

Esper made the announcement at a press conference with South Korean counterpart Jeong Kyeong-doo on the sidelines of a meeting of regional defense ministers in Bangkok.

The allies had announced plans to hold what they said would be a scaled-back combined flying training event in place of the previous annual drills known as Vigilant Ace later this month.

But the North was not satisfied with the changes and warned last week that the U.S. would face “shocking punishment” if “the hostile provocation is committed.”

Esper and Jeong said Sunday that the decision to postpone the drill was made after “close consultation and careful consideration.” No new date was announced.

“We have made this decision as an act of goodwill to contribute to an environment conducive to diplomacy and the advancement of peace,” Esper said, according to media reports from the press conference.

“We encourage [North Korea] to demonstrate the same goodwill,” he added, urging the North “to return to the negotiating table without precondition or hesitation.”

He stressed the decades-old U.S.-South Korean alliance remains “ironclad” and vowed the combined forces would maintain readiness to “fight tonight.”

Esper raised the possibility of a change to the joint training plans last week during a visit to South Korea, were he met with Jeong in the 51st allied Security Consultative Meeting.

He also reaffirmed the U.S. commitment to “provide extended deterrence to [South Korea] using the full range of military capabilities, including U.S. nuclear, conventional, and missile defense capabilities,” according to the joint communique from the meeting.

The two sides also noted the “critical role” played by some 28,500 U.S. troops stationed in South Korea, which remains technically at war with the North after their 1950-53 conflict ended in an armistice instead of a peace treaty.

"Given the current security environment, the Secretary also reaffirmed the commitment to maintain the current level of the U.S. military personnel in [South Korea] and to enhance combat readiness,” they added.

The allies have canceled or reduced the scope of many of their joint military exercises after President Donald Trump announced he was “stopping the war games” after his first summit with North Korean leader Kim Jong Un last year.

Commanders insist the lack of massive combined drills has not harmed defense capabilities as they continue to conduct low-profile tactical training.

Talks aimed at persuading the North to give up its nuclear weapons have faltered due to sharp disagreements over the extent of sanctions relief in exchange for disarmament measures.

Kim has given the U.S. an end-of-year deadline to offer a more flexible approach to negotiations, hinting that he may resume long-range missile or nuclear tests if that doesn’t happen.

The North already has conducted several missile and rocket tests this year, raising worries that it is improving its arsenal amid the deadlock.

Trump has dismissed such concerns, insisting that the launches didn’t pose a threat to the U.S. and he maintains a good relationship with Kim.

“Our pilots have to try to fight the enemies armed to the teeth … under any circumstances,” Kim was quoted as saying by the Korean Central News Agency.

“He stressed that however loudly the enemies may brag about their technological advantages, they can never overwhelm the politico-ideological and combat and moral advantages of our service personnel,” it added.

The report released several photos but didn’t provide details about the aircraft involved in the demonstration.

A senior State Department official, meanwhile, called on China to take action to prevent efforts to evade sanctions against the North such as ship-to-ship transfers of coal and oil he said takes place in Chinese waters.

“On North Korea, I urged Beijing to maintain pressure on the regime, noting the space for a diplomatic solution is quickly closing,” the official told reporters during a briefing, according to a transcript provided by the State Department.