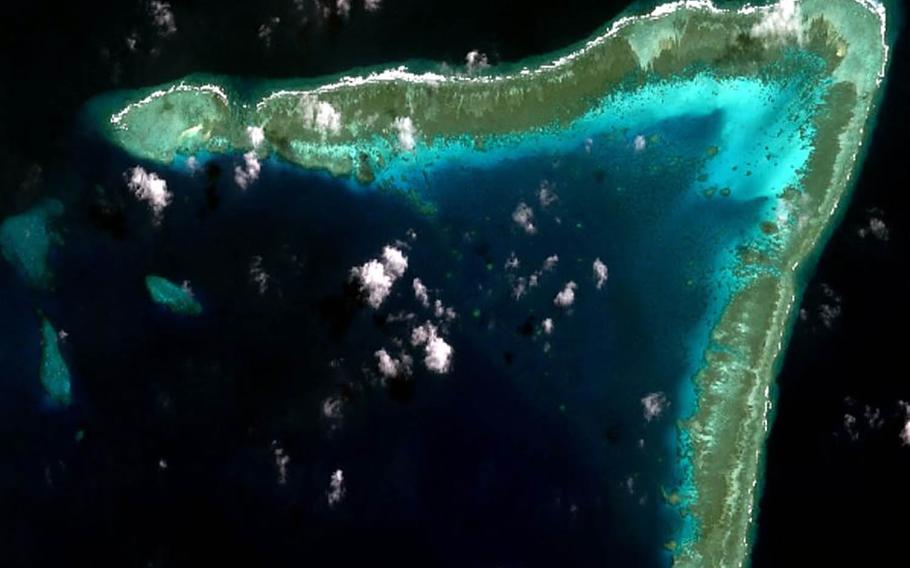 Whitsun Reef, also known as Julian Felipe Reef, is part of the Spratly Islands in the South China Sea. (NASA)

The U.S. State Department is standing by the Philippines in its latest run-in with China over disputed sea territory.

The Philippines protested the presence earlier this month of over 220 Chinese fishing vessels spotted by the Philippine coast guard near Julian Felipe Reef in the Spratly Islands. The two countries are at odds over their respective claims to the Spratlys.

The Chinese Embassy in Manila says the ships are fishing vessels taking shelter from rough seas. But, in a diplomatic protest Monday, the Philippine Foreign Ministry complained that “their swarming and threatening presence creates an atmosphere of instability,” and infringes the nation’s sovereignty, the Reuters news agency reported the next day.

The ships’ presence is a “clear provocative action of militarizing the area” and China should recall them, Philippines Defense Secretary Delfin Lorenzana said, according to Reuters.

State Department spokesman Ned Price added the U.S. view in a tweet Wednesday: “The U.S. stands with our ally, the Philippines, regarding concerns about the gathering of [Chinese] maritime militia vessels near Whitsun Reef. We call on Beijing to stop using its maritime militia to intimidate and provoke others, which undermines peace and security.”

Chinese fishing vessels frequently assist the coast guard and navy in asserting China’s maritime claims, according to The Associated Press.

The U.S. does not recognize China’s claims and conducts frequent freedom-of-navigation patrols in the disputed waters.

China’s claim to most of the South China Sea was rejected by an international tribunal in 2016; however, Beijing has ignored the ruling and built military facilities on seven of the disputed Spratly sites, according to the Asia Maritime Transparency Initiative.

Meanwhile, the Chinese Embassy in Manila tweeted to the U.S. Embassy twice Tuesday.

The first read: “The United States is not a party to the South China Sea issue. Fanning flames and provoking confrontation in the region will only serve the selfish interests of individual country and undermine the regional peace and stability.”

The second said: “Both China and the Philippines are sovereign and independent countries. We have the will, wisdom and ability to properly handle relevant issues through bilateral channels.”

The Chinese presence on the reef looks like an effort to expand territorial claims, Patricio Abinales, a Philippines expert at the University of Hawaii, told Stars and Stripes in an email Wednesday.

“They know they can do it because they know the Philippine navy cannot do anything about it, and the U.S. will not move,” he said.