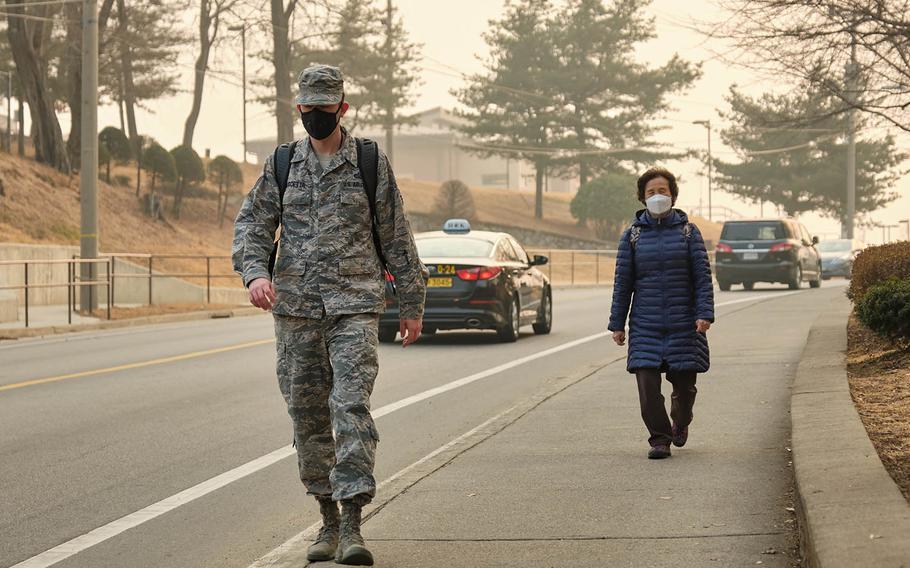 YONGSAN GARRISON, South Korea — With much of South Korea smothered in record levels of fine dust, the streets are full of people wearing masks as protection from the punishing air pollution.

Most American soldiers don’t have that option — at least when they’re in uniform. The Air Force permits masks when pollution hits a certain level.

Army regulations bar soldiers from wearing the masks, which cover noses and mouths, unless they have a certified medical condition that merits an exception.

That has caused concern among many soldiers and their loved ones as much of South Korea has endured several days of dense pollution that irritates eyes and makes breathing difficult.

“I feel like my husband should be able to wear a mask. I really don’t like that,” Army wife Alexandra Jackson said as she waited for dinner at the Yongsan Garrison food court.

She and her 10-year-old stepson, King Jackson, both wore masks around their necks. She said her husband also wears one when he’s off-duty.

“But when they’re in uniform it’s against code. I feel like the soldiers should be able to have the protection,” she said Tuesday, shortly after a governmental emergency alert beeped on cellphones to warn the air quality was bad and to urge people to wear their masks.

As of Friday, more than 1,650 people had signed a petition posted on Change.org earlier in the week calling for the policy to be changed so soldiers may wear masks in South Korea.

Worst air quality The military has taken measures to confront the growing problem, which experts blame on industrial drift from China and homegrown pollution.

South Korea had the worst air quality among a group of 35 wealthy nations, according to the most recent data from the Organization for Economic Cooperation and Development.

U.S. Forces Korea, the main command on the divided peninsula, revised its policy two years ago to give commanders at each level more latitude to move training indoors or postpone activities based on air quality. But masks were not allowed.

“Commanders are authorized to adjust training and activities based on air quality. The command recognizes the concerns raised by the community and the decrease in air quality,” said Eighth Army spokeswoman Lt. Col. Peggy Kageleiry.

“Soldiers with medical conditions and a profile requiring masks can wear them with the uniform,” she added.

Bases also keep the communities informed with updates on Facebook and internal alert systems. The problem is also acute at Camp Humphreys, south of Seoul, which is the new home to USFK headquarters.

South Korea has long suffered from a phenomenon known locally as “yellow dust,” which refers to contaminated fine sand particles that blow from the desert regions of China and Mongolia.

But the South, which has morphed into an economic powerhouse after rapid industrialization following the devastation of the 1950-53 Korean War, also generates its own pollution and most of its population of some 25 million lives in urban areas.

“There is a confluence of factors that lead to high levels of particulate matter in Korea,” said James Crawford, a NASA scientist who led a joint Korea-U.S. air quality field study in 2016.

“In public discourse, it is often attributed to transport from China without much further thought,” he told Stars and Stripes in an email. “While I do not discount that transport contributes, local emissions also play a bigger role when conditions are cold and ventilation of pollutants is inhibited.”

Facing rising alarm as his country endured a sixth day of thick haze, President Moon Jae-in issued a series of urgent instructions on Wednesday to try to curb the problem, including a proposed joint project with China to use artificial rain to clean the air.

Limiting activities USFK policy acknowledges the severity of the problem in regulation 40-6, which focuses on limiting outdoor activities under well-defined levels of pollution.

“Poor air quality impacts force health protection, unit safety and readiness, the well-being of USFK personnel and their family members and could jeopardize our ‘fight tonight’ capability,” it says.

The regulation lists six categories, with restrictions on military activity starting when the air is deemed unhealthy:

The Air Force is more lenient thanks to a policy put in place in June 2017 by the 51st Fighter Wing at Osan Air Base, south of Seoul.

It also offers guidelines on the type of masks to wear, saying normal dust and surgical masks are not effective in South Korea because the pollution particulates are very small. It suggests wearing masks with a grade of N-95 or greater, as determined by the National Institute for Occupational Safety and Health, or NIOSH.

“Airmen are permitted to wear certain masks outdoors in uniform when the Air Quality Index is reported as Orange (AQI value of 101-150) or higher,” said 1st Lt. Jackie Jastrzebski, a public affairs officer.

On Tuesday at Yongsan, the AQI hit 207, which is designated as very unhealthy, according to the garrison’s Facebook page.

“It hasn’t bothered me too much here,” the 1st Armored Division soldier said. “I’m more concerned about taking care of the soldiers. If a soldier wants to be able to wear a mask, then they should be able to.”

Health problems Air pollution is linked to health problems ranging from eye irritation to upper respiratory symptoms in the short term, and chronic respiratory diseases like asthma in the long term. Children and the elderly are considered particularly vulnerable.

Air Force Senior Master Sgt. Paul Kinsey, who transferred to Yongsan in November, recently decided it was time to shell out about $30 for a mask to filter the harmful particles.

“To me this should be issued if there’s a real concern,” he said, pointing to his new air-filtering mask. “Even if you’re here for a short period of time, you should be able to protect your lungs.”