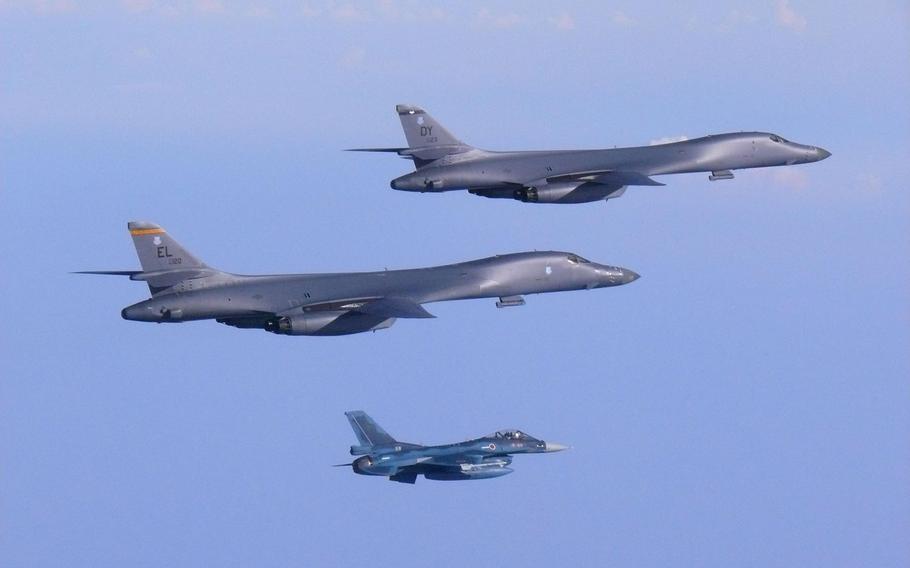 The exercise -- part of a 10-hour mission with South Korean and Japanese fighter jets -- was “in direct response to North Korea’s escalatory launch of intercontinental ballistic missiles,” a Pacific Air Forces statement said.

A suspected Hwasong-14 missile -- the second ICBM North Korea has tested successfully in July -- was fired late Friday from Mupyong-ni in the country’s far northwest and splashed down into the Sea of Japan about 620 miles east of the launch site, the Pentagon said.

The Guam-based B-1B Lancers first flew into Japanese airspace and were joined by two Japan Air Self-Defense Force F-2 fighter jets, the Pacific Air Forces statement said. The bombers then headed to the Korean Peninsula and were met by four South Korean F-15s.

After a low pass over Osan Air Base, the pair returned to Andersen Air Force Base, Guam.

The aircrews took part in “intercept and formation” training throughout the mission, the statement said.

A similar drill took place after North Korea launched its first ICBM on July 4, though that mission involved the Lancers firing inert weapons at a range in South Korea.

“North Korea remains the most urgent threat to regional stability,” Gen. Terrence O’Shaughnessy, Pacific Air Forces commander, said in the statement. “Diplomacy remains the lead; however, we have a responsibility to our allies and our nation to showcase our unwavering commitment while planning for the worst-case scenario.”

O’Shaughnessy added: “If called upon, we are ready to respond with rapid, lethal, and overwhelming force at a time and place of our choosing.”

Kim, reportedly present at the launch site, also boasted that the successful test demonstrated Pyongyang’s ability to conduct a surprise ICBM attack from any place and at any time and proved that the regime’s missiles can now reach “all across the continental U.S.”

The launch sends a “stern warning” to the U.S., which "loses its mind and makes uncalled-for remarks," Kim said in the statement.

President Donald Trump condemned the test as “reckless and dangerous,” while Secretary of State Rex Tillerson suggested China and Russia should do more to rein in their communist ally.

“As principal economic enablers of North Korea’s nuclear weapon and ballistic missile development program, China and Russia bear unique and special responsibility for this growing threat to regional and global security,” Tillerson said in a statement issued after the launch.

Boosting pressureJust hours after Friday’s test, the U.S. and South Korea responded by launching their own missiles into the sea.

“The ATACMS can be rapidly deployed and engaged and provides deep-strike precision capability, enabling the [U.S. and South Korea] to engage a full array of time-critical targets under all weather conditions,” the statement said.

A similar exercise was conducted soon after North Korea test-fired its first ICBM on July 4.

THAAD expansionSouth Korea’s defense ministry on Saturday said it will push for the expansion of an advanced U.S. missile-defense system, known as THAAD, on the peninsula that had been delayed after new South Korean leader Moon Jae-in ordered an environmental assessment shortly after taking office in May.

“Our military will talk with [the U.S.] as soon as possible in a bid to deploy additional THAAD launchers temporarily … and build our own response system against [North Korea’s] nuclear missiles in the near future,” the statement said.

To counter the growing missile threat from North Korea, Washington and Seoul agreed last year to place a THAAD battery in the remote southeastern area of Seongju. Residents -- fearing possible negative health and economic effects -- have protested the system.

North Korea has called THAAD a provocation aimed at bolstering U.S. military influence in the region. China also strongly objects to the system, fearing the powerful radar could be used to spy on its military.