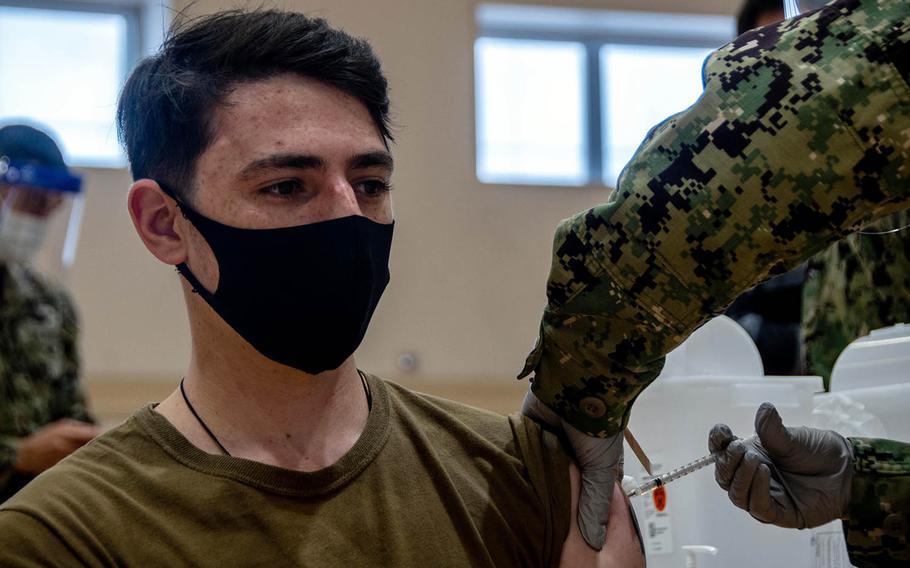 TOKYO – The U.S. military in Japan reported 12 new coronavirus cases as of 6 p.m. Tuesday, while the country’s capital announced 412 infections.

Tokyo’s one-day total rose by more than 100 new infections over Monday’s number but remained below 500 new cases for a third consecutive day, according to public broadcaster NHK and metro government data. The trend continues downward from the most recent peak of 734 new cases on Thursday.

At Kadena Air Base on Okinawa, two people tested positive while quarantined after recent travel outside of Japan, according to a Facebook post Tuesday. Another six individuals have recovered from COVID-19, the respiratory disease caused by the coronavirus, since Friday, the post said.

Yokosuka Naval Base – homeport of the U.S. 7th Fleet just south of Tokyo – has identified 10 new coronavirus patients since Friday, according to a Facebook post. It also said 23 people have recovered from COVID-19 and 63 remain under observation.

Of the new cases, three tested positive after falling ill with COVID-19 symptoms. Their contacts are being traced, according to the base. Contact tracing identified six other patients. The tenth patient is a base employee who also fell ill.

“It’s great to see the decline but important to keep our guard up as COVID-19 is still very much a concern,” the post said.

At Yokosuka, sailors on the aircraft carrier USS Ronald Reagan began lining up a week ago for the second shot of Moderna coronavirus vaccine, according to a report in Defense News, a Pentagon website. The carrier has a crew of about 5,000.

Sailors are inoculated as vaccine shipments arrive, “with subsequent doses coming incrementally over the next several months,” according to the report.

The second dose provides up to 95% immunity, up from 80% on one shot alone. The body’s reaction to the second shot can be more severe than the first and include fatigue, slight fever and swelling at the injection site.

Tokyo and three surrounding prefectures – Kanagawa, Saitama and Chiba – are in a state of emergency until March 7 due to the winter spike in coronavirus cases. Central Tokyo remains off-limits to U.S. personnel except those who reside there or have official business.

Kanagawa Gov. Yuji Kuroiwa appealed to U.S. personnel, including service members, civilian employees and their families, to refrain from non-essential travel, to make use of take-out rather than dining in restaurants and to limit their social gatherings, according to Facebook posts by Yokosuka and Naval Air Facility Atsugi.