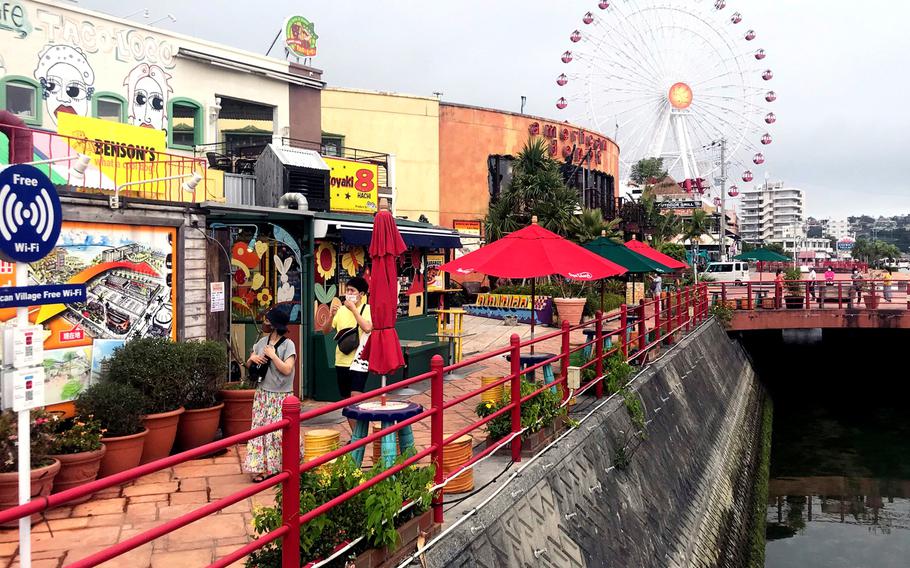 Buy Photo
A pair of visitors in masks stroll through American Village, a popular tourist spot on Okinawa, on March 30, 2021. (Matthew M. Burke/Stars and Stripes)

TOKYO – A cluster of new coronavirus cases the past week at bases on Okinawa prompted the U.S. military on Tuesday to lengthen a list of familiar pandemic restrictions re-imposed a week ago.

U.S. bases in Japan reported 30 new coronavirus patients as of 6 p.m. Tuesday, all but one on Okinawa.

Okinawa prefecture, where most U.S. troops are based, and Tokyo are also reporting higher case numbers, although those numbers pale next to patient tallies in January.

Yokota Air Base in western Tokyo reported one individual tested positive while still in quarantine after recently arriving in Japan from the U.S., according to a base Facebook post.

Okinawa prefecture has seen a spike in new case numbers starting with 30 on March 13 and climbing to 98 on Saturday, according to the prefecture’s COVID-19 website.

Tokyo reported 364 people newly infected with the coronavirus Tuesday, 27 more patients than March 23, according to public broadcaster NHK. For 11 days, new patient numbers in the city are higher than they were seven days earlier, according to metro government data.

The seven-day moving average in Tokyo has increased from 297 on March 18 to 357.7 on Monday, according to government data.

At Kadena, 13 individuals tested positive after becoming ill with symptoms of COVID-19, the coronavirus respiratory disease. The remaining seven were close contacts of a previously infected person, according to the 18th Wing.

One new patient is a Kadena Commissary employee who had no close contacts with service members, Defense Department civilian employees, contractors or family members, according to the wing. The base has reported 42 individuals with COVID-19 in March.

Kadena on Tuesday added outdoor, off-base dining to its week-old prohibition on indoor dining, or even waiting inside a restaurant on a take-out order. The exception is waiting on takeout at malls or food courts.

Indoor markets with multiple vendors such as flea markets and fish markets, and outdoor markets where social distancing and COVID-19 preventive measures are not possible or practiced are also off-limits. Patronizing hair and nail salons, barbershops, tattoo parlors, massage parlors and similar services is also prohibited.

Riding mass transit, with some exceptions, and patronizing arcades and theaters off-base were also put off-limits a week ago.