US military on Okinawa reports 39 new COVID patients, one at a primary school 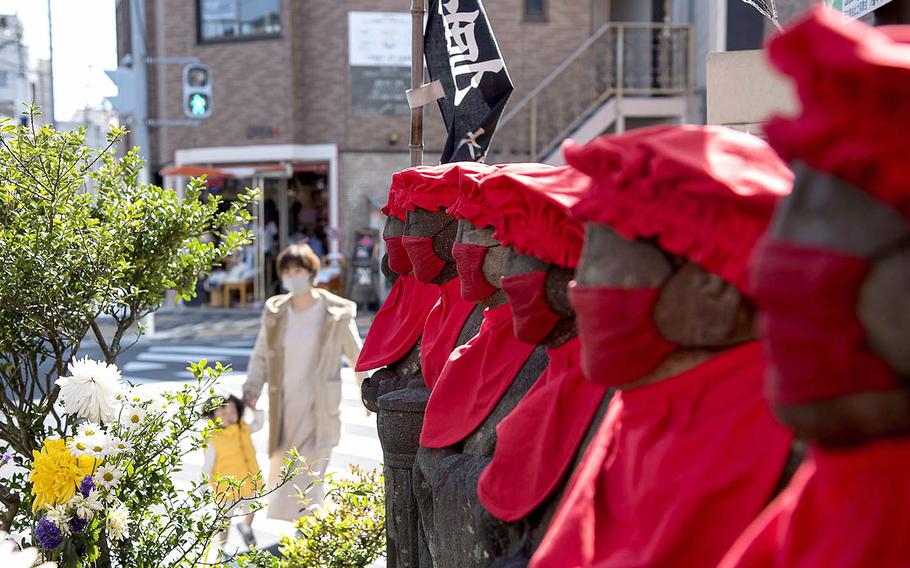 Buy Photo
Jizo statues seen near Kamakura, Japan, Sunday, April 18, 2021, are clothed in masks as a petition to the deity that guards women and children to end the coronavirus pandemic soon. (Akifumi Ishikawa/Stars and Stripes)

TOKYO — U.S. commands in Japan reported 39 new cases of the coronavirus between 6 p.m. Friday and the same time Monday, all of them on Okinawa, where the virus resurged in March.

One new coronavirus patient turned up at a Defense Department school on Kadena Air Base, according to a message Monday from the principal to students’ families and school staff. Contact tracing is underway, wrote Principal Lorri Vallone of Bob Hope Primary School, and as a result “Ms. Russell and Ms. Kaczynski’s classrooms will be closed tomorrow, Tuesday.”

The spring surge also continued in Osaka prefecture, which reported more than 1,000 new COVID-19 patients for six days straight through Sunday and another 719 on Monday, according to public broadcaster NHK and prefectural data.

Osaka, home of Japan’s second-largest city, is experiencing its worst phase of the pandemic. It reported another four dead Monday for 1,273 over the past year.

Nearly all U.S. commands prohibit their people from traveling to Osaka except on official business. Yokota Air Base in western Tokyo, which permits off-duty travel anywhere in Japan, on Friday began requiring approval by squadron commanders or their equivalents for trips to Osaka city or prefecture, according to base commander Col. Andrew Campbell’s order.

Tokyo confirmed another 405 people had tested positive for the virus on Monday, according to NHK. Though its numbers are lower than the previous peak in January, one-day totals since March have consistently risen over those on the same day the previous week, according to metro government data.

On Okinawa, the Marine Corps announced via Facebook on Monday that 30 people tested positive between Saturday and Monday at Camp Hansen – two each at Camp Foster and Marine Corps Air Station Futenma and one each at Camps Schwab and Kinser. The Marines have reported 103 case of COVID-19 on Okinawa so far this month.

Kadena Air Base reported two people contracted COVID-19, according to a Facebook post Friday evening. One was a close contact of a previous coronavirus patient and the other fell ill with COVID-19 symptoms and self-isolated before testing positive.

An unspecified number of close contacts were quarantined, according to Kadena. The base has reported new 62 COVID-19 patients so far in April.