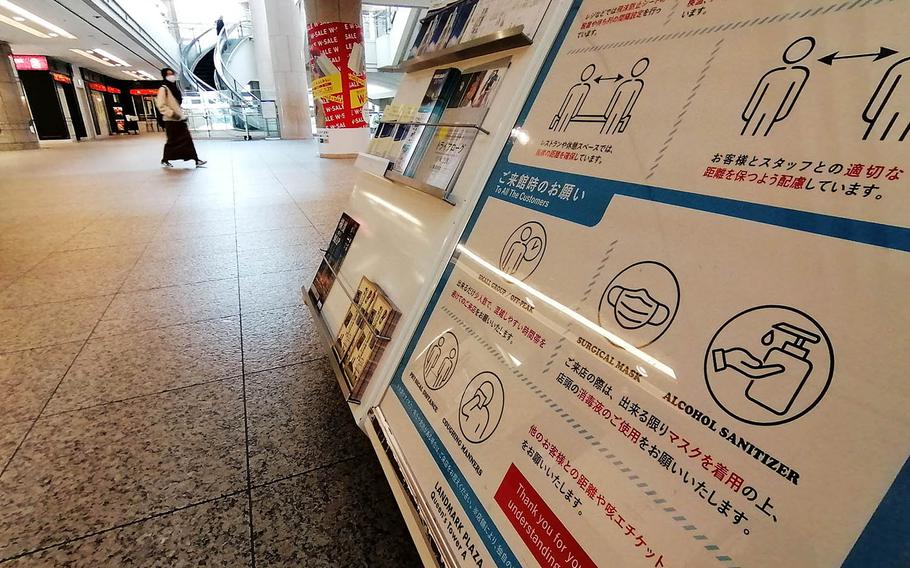 TOKYO — Japan will extend until March 7 a state of emergency across 10 prefectures, including the greater Tokyo metro area, even as the rate of new infections in the country is declining, according to local media reports.

The Tokyo Metropolitan Government the same day reported another 556 people tested positive for COVID-19, the coronavirus respiratory disease, according to public broadcaster NHK. Although higher than Monday’s total, that number is lower than 1,000 for a fifth consecutive day, according to metro government data.

U.S. commands in Japan on Tuesday reported 13 people tested positive for the coronavirus.

Japan on Monday reported 2,776 new infections, a steady decline from the pandemic one-day high of 7,855 new cases on Jan. 9, according to the World Health Organization.

Tokyo, a city of 13.5 million, on Monday surpassed 100,000 coronavirus cases during the pandemic and has suffered nearly 900 deaths.

New infections in the city have fallen steadily from a high of 2,392 on Jan. 8, when Suga first declared the emergency at the request of governors in Tokyo and the surrounding Kanagawa, Saitama and Chiba prefectures.

Declarations in seven more prefectures, including Osaka and Kyoto, followed a week later. All were set to expire Saturday. Only the emergency in Tochigi prefecture, north of Tokyo, will be lifted.

An emergency declaration means the government may ask businesses to continue closing between 8 p.m. to 5 a.m., request a greater percentage of telework and ask people to refrain from unnecessary travel. Authorities have no real enforcement power, although a measure forwarded by the Japanese Cabinet recently to the Diet could change that.

A handful of U.S. military installations lie within Tokyo and Kanagawa. Those commands have tailored some restrictions, including dining-out curfews and limits on off-duty travel, to comply with the Japanese emergency.

Yokosuka Naval Base, homeport in Kanagawa of the U.S. 7th Fleet, has reported nine infections since Friday, according to a Facebook post. Three people tested positive after showing symptoms of COVID-19; five were discovered during contact tracing; and one is a recent arrival to Japan who tested positive in quarantine, according to the base.

The base is monitoring 88 patients. The 293 cases in January are the highest one-month total it has reported publicly.

Yokota Air Base, headquarters in western Tokyo of U.S. Forces Japan, recorded three new patients between Saturday and Tuesday, according to a Facebook post. One is a recent arrival and the others “were identified and quarantined” by public health authorities, according to the base, which provided no further information.

Yokota has eight patients under observation. It reported 74 coronavirus cases in January.

Farther west, Marine Corps Air Station Iwakuni recorded one new coronavirus patient, an individual already quarantined after contact with another infected person, according to a Facebook post Tuesday. The base reported 84 cases in January.