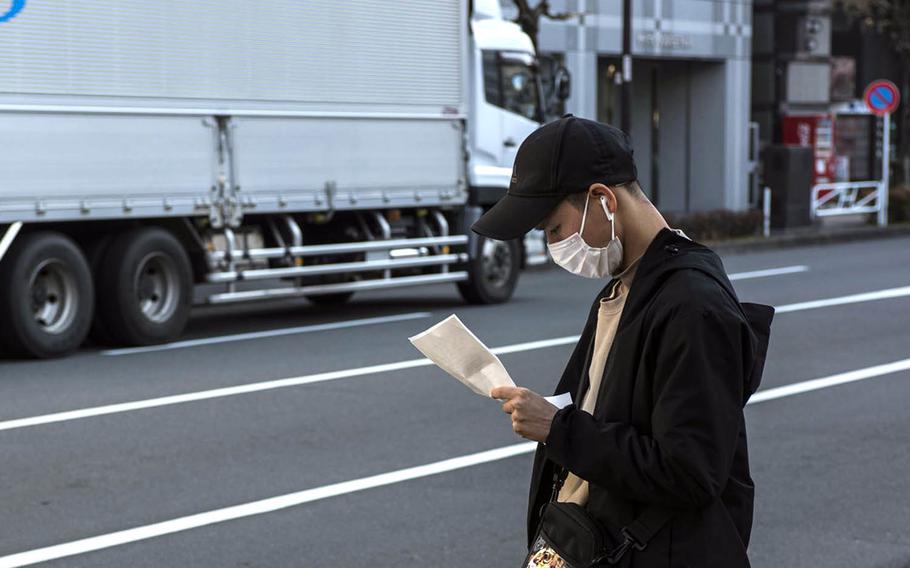 Buy Photo
A man wearing a mask as protection against the coronavirus pauses on a street in Hachioji, Japan, Feb. 2, 2021. (Theron Godbold/Stars and Stripes)

TOKYO — The largest U.S. naval base in Japan on Tuesday reported three new cases of the coronavirus that appeared over the previous four days.

No other U.S. military commands in Japan or South Korea reported new infections as of 6 p.m. Tuesday.

Yokosuka Naval Base, 35 miles south of Tokyo, said in a Facebook post that three people tested positive after recently arriving in Japan; the fourth was discovered during a medical screening.

The base medical staff is monitoring 15 patients and have cleared 22 since Friday.

Since Friday, three commands in Japan said they’ve cleared the last of their patients and have no known coronavirus cases on their installations: Yokota Air Base in western Tokyo, Naval Air Facility Atsugi outside the city in Kanagawa prefecture and Sasebo Naval Base on Kyushu island.

For a second day in a row, the Marine Corps reported zero new cases at its bases Tuesday on Okinawa.

The Tokyo Metropolitan Government reported 275 new coronavirus infections on Tuesday, an increase over Monday’s number but still below 300, according to public broadcaster NHK. New one-day infections have declined from 445 on Thursday, according to metro government data.

Tokyo and the surrounding prefectures of Kanagawa, Saitama and Chiba remain in a state of emergency until March 7. Farther west, in central Honshu, the governors of Osaka, Hyogo, Kyoto, Aichi and Gifu prefectures requested an early end to the emergencies there, according to NHK.

Prime Minister Yoshihide Suga was expected to meet Wednesday with Cabinet ministers to discuss those requests, according to the broadcaster.

South Korea reported 357 new coronavirus patients as of midnight Monday, with 118 in Seoul and 122 in Gyeonggi province, home of the largest U.S. base in the country, Camp Humphreys.

Cases of COVID-19, the coronavirus respiratory disease, have been falling in South Korea following a spike that exceeded 600 in one-day cases following the Lunar New Year weekend that began Feb. 12.

“It’s the last week of the month,” Prime Minister Sye-kun Chung said Tuesday in Seoul, “but we are not yet completely out from under the effects of the third wave of the COVID-19 pandemic.”

Chung said Seoul police making weekend inspections in the Gangnam section of the city found many bars and clubs not following even basic quarantine rules.

If the government turns a blind eye to such behavior, he said, “it’s just like deceiving the majority of people strictly abiding by the disease control regulations in daily life.”