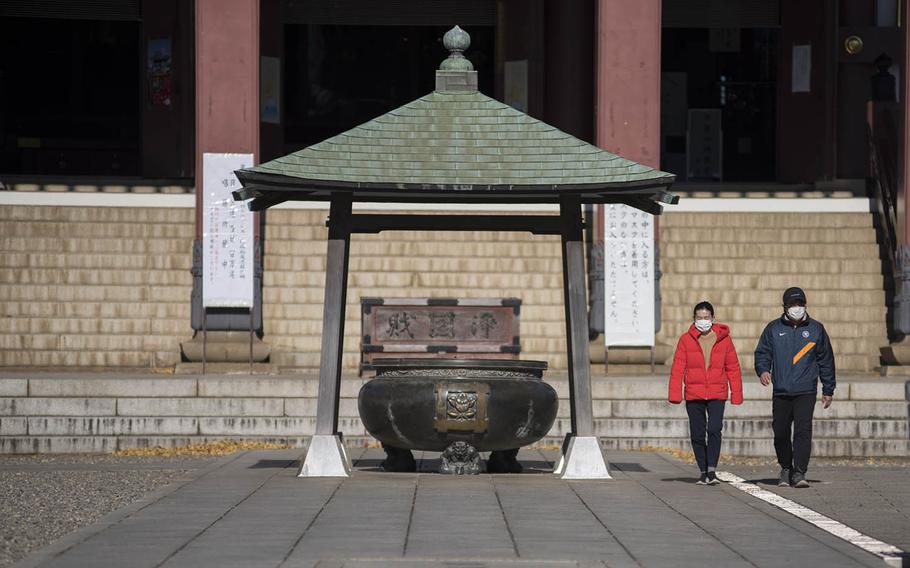 Buy Photo
Visitors to the Honmon-ji temple, Tokyo, wear masks to prevent the spread of the coronavirus on Tuesday, Dec. 22, 2020. (Akifumi Ishikawa/Stars and Stripes)

TOKYO – U.S. military commands in Japan reported 13 new cases of coronavirus as of 6 p.m. Wednesday, the eve of a four-day federal holiday.

Japan reported 2,135 new cases on Tuesday, the most recent data available, according to the World Health Organization.

In Tokyo, the metropolitan government reported 748 people tested positive Wednesday for the virus, the second highest daily total thus far, according to public broadcaster NHK. The city reported its highest one-day pandemic total, 821, on Dec. 17, according to metro government data.

South Korea, like Japan experiencing a record-breaking surge in new coronavirus patients, on Tuesday reported 1,092 new patients and 17 deaths due to COVID-19, the respiratory disease caused by the virus.

In Japan, Misawa Air Base in northeast Japan on Wednesday reported one person, a new arrival to Japan, tested positive for the virus and went immediately into quarantine. That person’s roommate after arriving was also quarantined as a precaution, according to a base Facebook post. The base has four patients under observation.

Naval Air Facility Atsugi, 26 miles southwest of central Tokyo, on Wednesday reported six new coronavirus patients: one recent arrival to Japan, one who contracted the virus from another person and six who fell ill and tested positive, said base spokesman Sam Samuelson. He did not have available the dates those patients were tested. Atsugi has 18 patients under observation, according to its Facebook page on Wednesday.

U.S. Army Japan, headquartered southwest of central Tokyo at Camp Zama, reported one individual tested positive on Monday, according to a news release. That patient had close contact with another infected person, according to the Army.

Sasebo Naval Base, on Kyushu, discovered one new patient Wednesday during a medical screening, according to the base Facebook page. The naval base is monitoring 17 patients.

On Okinawa, Kadena Air Base reported four individuals tested positive while still in quarantine after returning to Japan from travel abroad, according to a base Facebook post.