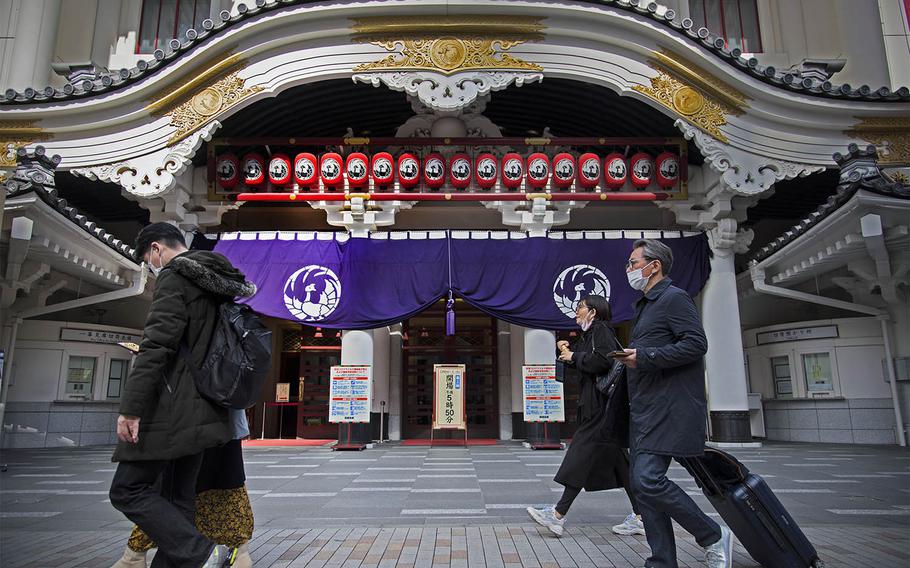 Buy Photo
People wear masks as they stroll past the Kabukiza Theatre in Ginza, Tokyo, March 9, 2021. (Akifumi Ishikawa/Stars and Stripes)

TOKYO – U.S. military bases in Japan and South Korea reported five new cases of the coronavirus as of 6 p.m. Friday.

Yokota Air Base, the headquarters of 5th Air Force and U.S. Forces Japan in western Tokyo, had two people test positive between Tuesday and Thursday, according to a base Facebook post.

Both were “identified and quarantined” by public health authorities, according to the base, which provided no further information on how they contracted the virus. Close contacts were notified, the post said.

Those two are the only patients at Yokota, which last reported new coronavirus cases on Feb. 5.

Marine Corps Air Station Iwakuni, 500 miles west of Tokyo, had a new arrival come up positive on a test required prior to leaving a two-week quarantine, according to a Facebook post. The air station last reported a coronavirus case on Feb. 15.

Tokyo reported 304 people tested positive for the coronavirus Friday, according to public broadcaster NHK. The seven-day average that day was 273.6, the same as the previous week.

Tokyo and the three surrounding prefectures remain in a state of emergency until March 21. Measures are largely voluntary, but the government incentivizes businesses to comply with an 8 p.m. closing time, according to the metro government website.

U.S. commanders in the metro area prohibit their people from patronizing restaurants after 8 p.m. in most cases.

One soldier visited Osan Air Base on Sunday. Both are in quarantine now at Humphreys, according to USFK.

Gyeonggi province, where Osan and Humphreys are located, reported 157 new COVID-19 cases Friday, and Seoul reported 138, according to the Korea Disease Control and Prevention Agency.

The numbers for Gyeonggi have declined from 199 on Wednesday. Seoul has reported case numbers in the 130s the past three days.