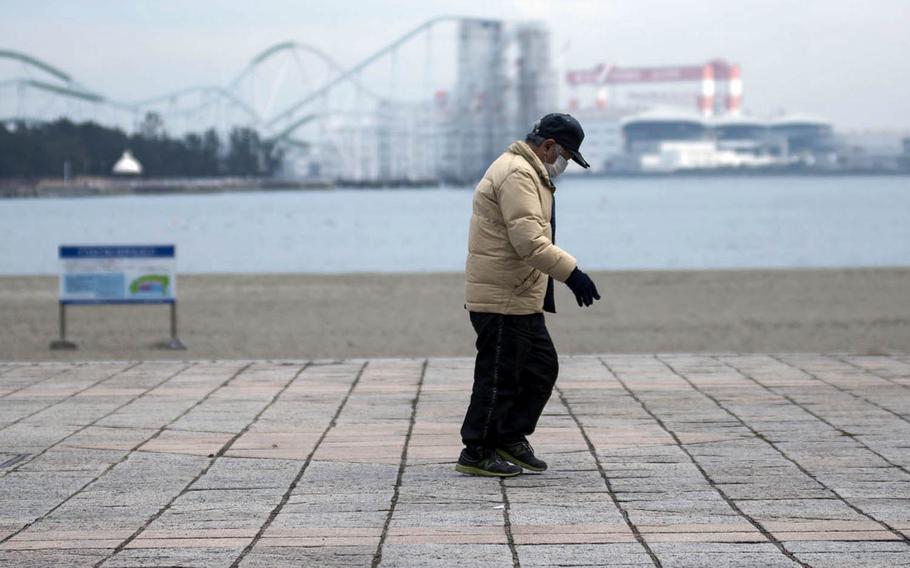 Buy Photo
A man wears a mask to guard against the coronavirus while walking in Yokohama, Japan, Jan. 26, 2021. (Akifumi Ishikawa/Stars and Stripes)

TOKYO — The U.S. military in Japan and South Korea reported 17 new cases of the coronavirus as of 6 p.m. Thursday.

Meanwhile, Japan’s capital city announced another 1,064 people had tested positive for the virus, according to public broadcaster NHK. That’s an increase over the previous day’s 973 but still part of a general downward trend, according to data from the Tokyo Metropolitan Government.

Naval Air Facility Atsugi, 26 miles southwest of Tokyo, reported two new patients on Wednesday and two on Thursday, said base spokesman Sam Samuelson. Two tested positive upon arrival at a Tokyo airport, one came up positive on a test required before exiting quarantine and the fourth was discovered in a random test, Samuelson said. The base has 16 patients under observation.

About 500 miles to the west, Marine Corps Air Station Iwakuni reported two new patients who also tested positive before exiting quarantine. They had been isolated after contact with another infected person and the likelihood of their transmitting the virus is low, according to a base Facebook post.

Sasebo Naval Base, on Kyushu island in southern Japan, reported two individuals tested positive for the virus Tuesday, according to a Facebook post. One was discovered during a medical screening and the other was a close contact of another infected person. They are the only patients being monitored by base medical personnel.

On Okinawa, Kadena Air Base announced via Facebook on Wednesday evening that an employee at the Seaside Restaurant at Kadena Marina tested positive after becoming ill Jan. 21 with symptoms of COVID-19, the coronavirus respiratory disease. The employee self-isolated and did not work after becoming ill, according to the base. An unspecified number of that person’s close contacts were quarantined.

“Out of an abundance of caution, the Seaside Restaurant was closed to be cleaned/sanitized and is open to the public again for outdoor seating and takeout,” the base said.

U.S. Forces Korea on Thursday had eight people test positive for the virus after arriving in South Korea between Jan. 11 and Monday, according to a news release.

Six service members arrived at Osan Air Base aboard the Patriot Express, a government-contracted air passenger service, on Jan. 11, 12, Sunday and Monday. One service member and a family member arrived at Incheon International Airport via commercial flights on Jan. 18 and Saturday.