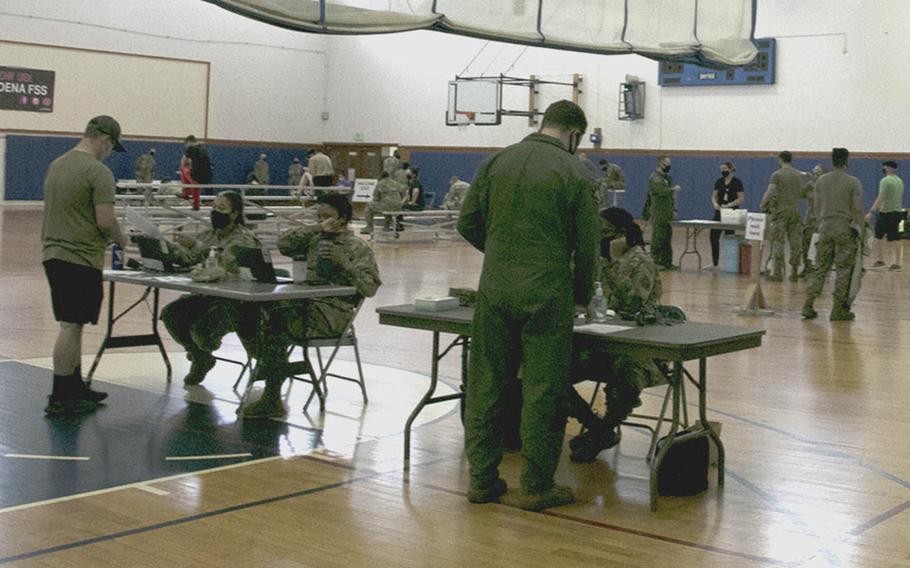 People check in to receive the coronavirus vaccine at the Risner Fitness and Sports Complex on Kadena Air Base, Okinawa, Friday, April 9, 2021. (Matthew M. Burke/Stars and Stripes)

TOKYO – As new coronavirus cases on their installations continue to wane, some U.S. commanders in Japan and South Korea are emphasizing the progress they’ve made vaccinating their people.

U.S. Forces Korea and several U.S. bases in Japan have begun calling on all eligible recipients ages 18 and older to come for inoculations, from Misawa Air Base in northeastern Japan to all installations on Okinawa.

Other installations, including Yokota Air Base, Sasebo Naval Base and Marine Corps Air Station Iwakuni, for example, are preparing to inoculate the next-to-last group on the Defense Department priority list: people with high-risk medical conditions, people ages 64 to 75 and those who missed out on earlier vaccine opportunities. The general population, ages 16 and older, is the final group.

Meanwhile, the daily case count in Japan’s largest urban areas continued to mount as a viral surge showed no sign of cresting on Friday. Tokyo reported another 537 people infected by the coronavirus, 97 more than the previous Friday, according to public broadcaster NHK. Osaka prefecture reported 883 new patients, the third consecutive day in its worst coronavirus spike during the pandemic.

The Marine Corps had six new cases on Okinawa: five at Camp Hansen and one at Camp Foster, according to a Facebook post by Marine Corps Installations Pacific.

At Yokosuka Naval Base, a base employee tested positive sometime since Tuesday after contact with another infected person, according to a news release.

USFK had two people turn up positive for COVID-19 on Wednesday, according to a news release. A service member on temporary duty tested positive before leaving the peninsula for his permanent duty station. A South Korean contractor at Camp Casey apparently contracted the virus through contact with another person.

The service member is quarantined at Camp Humphreys; the contractor is isolated at her home.

Although Western Pacific commanders have mostly not talked about how many of their people have volunteered for the jab, this week several broadcast their progress vaccinating their populations.

The U.S. 7th Fleet, homeported at Yokosuka Naval Base south of Tokyo, announced Friday it has vaccinated nearly 14,000 service personnel on its ships and installations. The fleet has about 20,000 sailors.

The commander of Misawa Air Base in northeastern Japan on Wednesday said about half his airmen are partly or fully inoculated. The base plans to stretch an incoming shipment of 1,900 doses of the one-shot Johnson & Johnson vaccine to as many eligible people as possible, Col. Jesse Friedel said in a Facebook Live video Thursday. A vaccination clinic is scheduled for April 16 at the officer’s club.

On April 1, Naval Hospital Okinawa opened its vaccine eligibility to people 18 and older. Other U.S. service branches on the island followed suit this week.

The Marine Corps has administered 37,000 vaccinations on Okinawa since Dec. 26, according to an email Thursday from Capt. Pawel Puczko of III Marine Expeditionary Force to Stars and Stripes. Naval Hospital Okinawa on Camp Foster serves a population of 47,000 service members, their families and civilian employees.

During a shot clinic Friday inside the Risner Fitness and Sports Complex at Kadena Air Base on Okinawa, fewer recipients showed up than were expected, said Maj. Allen Hauser, chief of pharmacy operations for the 18th Medical Group. He said some are probably deciding not to get vaccinated, despite a drumbeat of messages from military health professionals that the vaccines are safe and effective.

“Please take advantage of this opportunity, make an appointment, and come get a vaccination,” the naval hospital commander, Capt. David Krulak, said in a news release Wednesday.

Recipients may decline the vaccines because they are approved only for emergency use by the U.S. Food and Drug Administration.