US may not see N. Korean attack coming if hostilities flare up, top commander warns 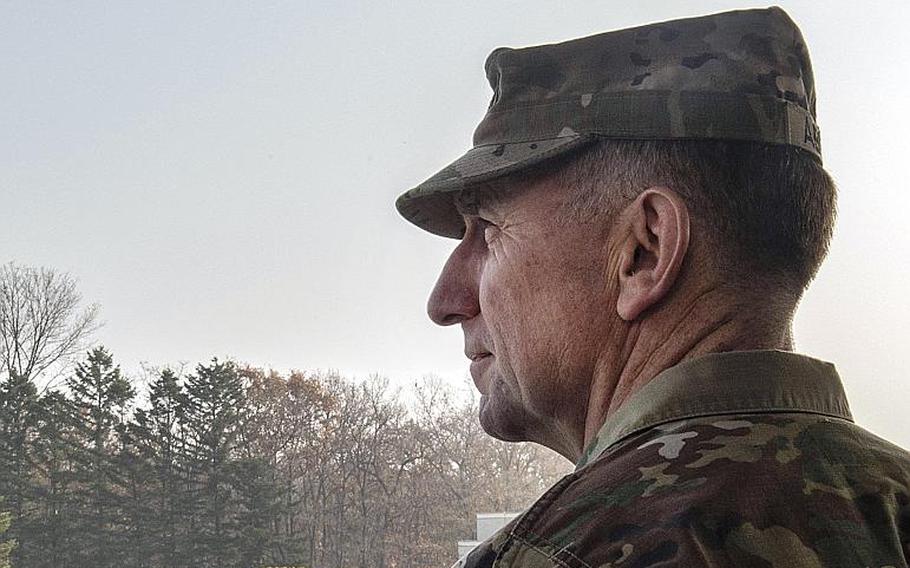 SEOUL, South Korea — The top U.S. commander in South Korea warned lawmakers that intelligence, surveillance and reconnaissance assets may be insufficient to detect a possible attack from the North if denuclearization talks fail and tensions begin to rise again.

Gen. Robert Abrams, the commander of U.S. Forces Korea, expressed confidence in overall military readiness despite a reduction in the scope of joint training exercises with South Korea. But he noted that North Korea’s activity is “inconsistent with denuclearization” and is casting a cloud over the sense of calm on the divided peninsula.

“I remain clear-eyed about the fact that despite a reduction in tensions along the Demilitarized Zone and a cessation of strategic provocations coupled with public statements of intent to denuclearize, little to no verifiable change has occurred in North Korea’s military capabilities,” he said Wednesday during a hearing before the House Armed Services Committee.

“As such I believe it is necessary to maintain a postured and readied force to deter any possible aggressive actions,” he added.

Abrams, who assumed command in November, also said the military has enough intelligence, surveillance and reconnaissance resources, known as ISR, as long as the diplomatic push to rid North Korea of its nuclear weapons continues.

“But as we look to the future as conditions might change, if they change negatively then our stance, our posture is not adequate to provide us an unblinking eye to give us early warning and indicators,” he said in response to a question. “We’re short to be able to do that if things start to turn bad.”

North Korea demonstrated strong progress in its efforts to develop a nuclear weapon that could target the U.S. mainland during a series of missile and nuclear tests in 2016-17 that raised fears of a new war. Tensions have ebbed since the North began engaging in U.S.-led diplomatic efforts, including holding two summits with the United States.

But the nuclear talks stalled after the most recent summit between President Donald Trump and North Korean leader Kim Jong Un in Hanoi, Vietnam, collapsed amid differences over North Korea’s demands for sanctions relief and the U.S. insistence on final, fully verified denuclearization.

Trump’s administration has acknowledged slow progress but maintained optimism that it can reach a deal with the communist state, eager to show progress where past U.S. administrations had failed.

“We have not yet seen them make the big move that we were frankly hoping that they would do in Hanoi,” Secretary of State Mike Pompeo said during a separate congressional hearing on Wednesday. “I’m still hopeful that we can engage and negotiate with them and get to the right outcome.”

North Korea is seeking a reciprocal approach to talks in which it is rewarded for steps already taken toward denuclearization, including a testing moratorium and what it says was the destruction of its main nuclear testing site.

The United States maintains some 28,500 servicemembers in South Korea, which remains technically at war with the North since their 1950-53 conflict ended in an armistice instead of a peace treaty.

The military has adjusted to the administration’s decision to scale back drills with the South Koreans, Abrams said, adding the allies had conducted 82 combined field training exercises since he took command in November.

“We met all our training objectives,” he told lawmakers. “The biggest difference is we just don’t talk about it publicly.”