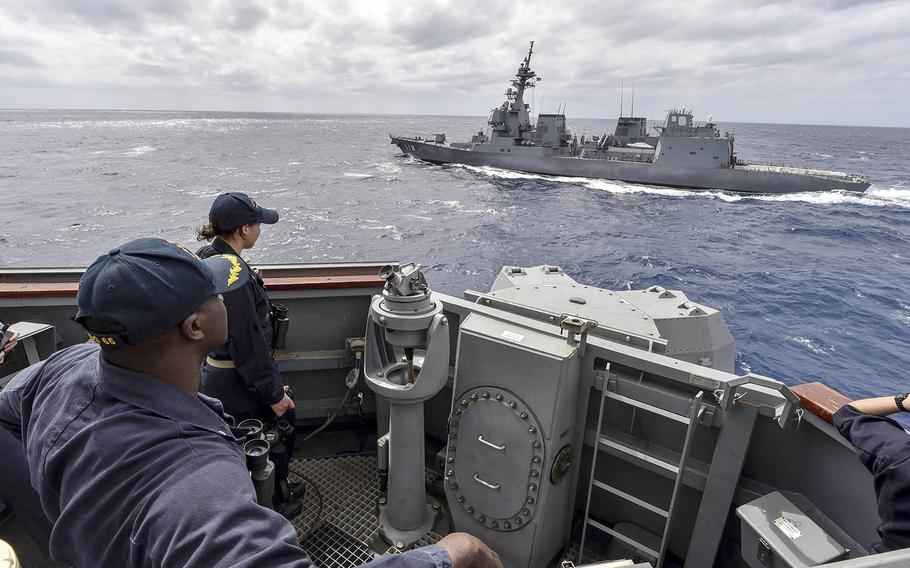 The guided-missile destroyer USS Benfold, foreground, sails alongside the Japanese destroyer JS Fuyuzuki during a close-quarters maneuvering drill last month in the Philippine Sea. Both ships are taking part in MultiSail 2018, which is underway near Guam. (Benjamin Dobbs/U.S. Navy photo)

YOKOSUKA NAVAL BASE, Japan — American and Japanese sailors are taking part in realistic drills off Guam that aim to improve their combat abilities on land, in the air and at sea.

This year’s MultiSail, which started Thursday and continues through March 14, will focus on tracking and defeating submarines, surface warfare and live-fire drills, Capt. John Duffy, Destroyer Squadron 15 commander, said in a Navy statement.

The USS Antietam, USS Curtis Wilbur, USS Benfold, USS Mustin, JS Fuyuzuki, along with other submarine and special units, are taking part in the realistic training. It’s designed to “demonstrate the inherent flexibility” of the combined forces and their “wide range of capabilities” from maritime-security operations to complex anti-submarine and air-defense drills, the statement said.

Duffy said the practice helps boost the countries’ abilities to work together, especially in conflict situations.

“We have designed MultiSail to exercise how we detect, locate, track and engage simulated units at sea, in the air, on land and underwater with our Japan Maritime Self-Defense Force allies to help us increase our interoperability in a range of mission areas,” he said.

Tokyo protested to Beijing in January after a submarine presumed to be Chinese was detected in Japan’s contiguous zone around Okinawa and the disputed Senkaku Islands. Japan Vice Foreign Minister Shinsuke Sugiyama expressed “great concern” over the issue and urged China not to do it again.

A JMSDF spokesman said MultiSail 2018’s focus on submarines is a “great opportunity for Japan and the U.S. to practice cooperating in anti-submarine warfare,” but they do not conduct exercises with a particular country in mind. Rather, MultiSail readies them to be able to respond to any circumstance.

“We have been taking all possible measures by conducting monitoring and information gathering activities at all times,” he said.

Cmdr. Kazuteru Hirano, of the JS Fuyuzuki, said the exercise gives the JMSDF an opportunity to increase its tactical capabilities and “strengthen our interoperability with our U.S. Navy allies.”

“The Japan-U.S. alliance is stronger than it has ever been, and it is growing stronger,” he said.

MultiSail began in 2004 as a pre-deployment training operation, but has grown to a “bilateral exercise testing some of the latest equipment, tactics, and procedures,” the Navy said.

The destroyer USS Fitzgerald participated in last year’s training, about three months before it collided with a cargo ship on June 17, killing seven of its sailors.

The USS Barry, USS Stetham, USS McCampbell, JS Ikazuchi and JS Hatakaze also participated last year. The USS Mustin is the only ship from MultiSail 2017 to join this year’s iteration.