US gives a half-dozen surveillance drones to the Philippines 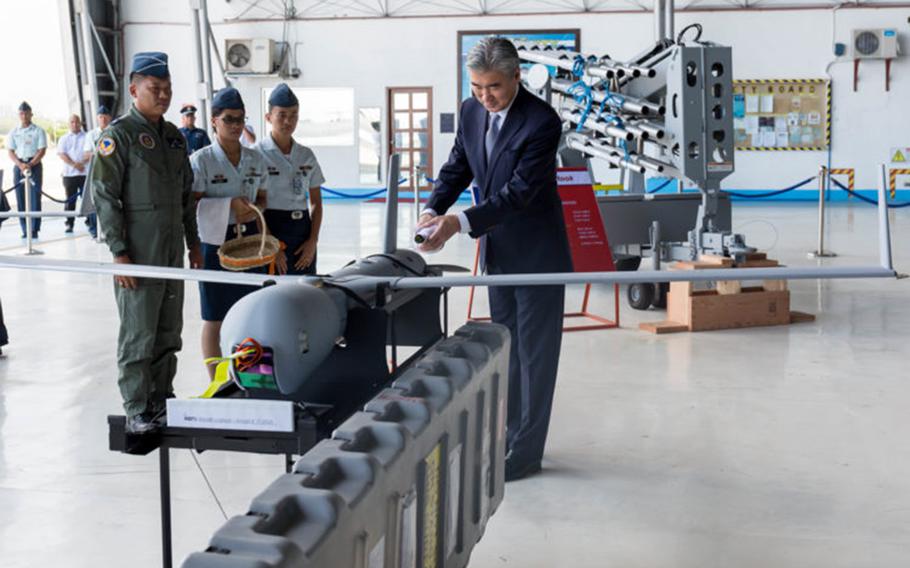 U.S. Ambassador to the Philippines Sung Y. Kim pours champagne over a Scan Eagle Unmanned Aerial Vehicle during a traditional turnover and blessing ceremony on March 13, 2018. (U.S. Embassy in the Philippines)

The U.S. delivered six surveillance drones to the Philippines on Tuesday, bolstering the country’s ability to respond to a growing militant threat.

The ScanEagle drones, which are worth more than $13 million, will “increase the Philippine military’s maritime domain awareness, humanitarian assistance and disaster relief and counterterrorism capabilities,” the U.S. Embassy in Manila said in a statement.

The drones can operate above 15,000 feet and stay airborne for 20 hours, according to manufacturer Boeing. They were first deployed to Iraq in 2004 by the Marine Corps.

The Philippine Air Force will fly the ScanEagles out of Antonio Bautista Air Base in Palawan province, the embassy said.

The drones, provided through the Foreign Military Financing program, are the latest American military hardware given to the Philippines as the country struggles to contain Islamic insurgents in the south.

Last year, the U.S. provided a pair of Cessna 208B Grand Caravan intelligence, surveillance and reconnaissance planes as part of $33 million counterterrorism package.

The drones and aircraft transfers “represent our strong commitment to enhance the capabilities of the Armed Forces of the Philippines,” U.S. Ambassador Sung Kim said at a ceremony marking the drone handover, according to the embassy statement.

Philippine Defense Secretary Delfin Lorenzana said the delivery is a sign of the U.S. and Philippines’ “goodwill, deep friendship, and genuine commitment to peace,” according to local media.

Analysts have warned that the Islamic State, reeling from losses in Syria and Iraq, is looking to shift operations to Southeast Asia. Last year, Filipino troops fought for five months to free the city of Marawi on the southern island of Mindanao from hundreds of militants who had sworn allegiance to the Islamic State. U.S. Special Forces provided intelligence, reconnaissance and surveillance to Filipino commanders during the campaign, according to U.S. Pacific Command.

Last month, Duterte joked about making his country a province of China and said militarized artificial islands constructed by China in the South China Sea are intended to be used against the U.S., not the Philippines.