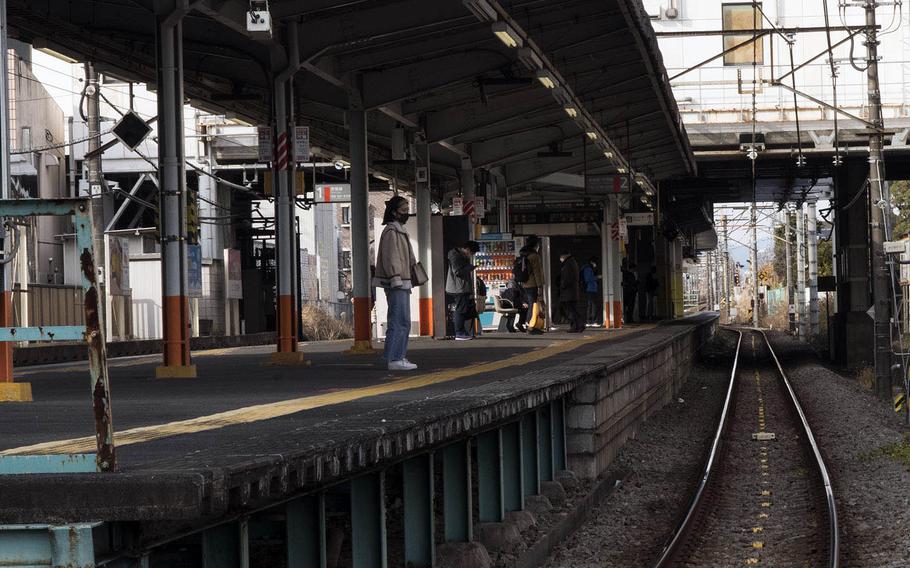 Buy Photo
A lone, masked traveler waits for a train in Fussa, near Yokota Air Base, Japan, Jan. 5, 2020. (Theron Godbold/Stars and Stripes)

TOKYO – U.S. military commands in Japan and South Korea reported 63 new coronavirus patients as of 6 p.m. Monday, most of them new arrivals to U.S. Forces Korea since late December.

In Tokyo, the metropolitan government on Monday announced that another 1,219 people have become infected with the virus, making a week straight of more than 1,000 cases each day, according to public broadcaster NHK. The number of patients deemed seriously ill, 131, is at a pandemic high, the report said.

A handful of U.S. bases in the greater Tokyo metro area have imposed 8 p.m.-5 a.m. curfews and other measures to comply with a state of emergency declared Thursday by the Japanese government until Feb. 7.

In South Korea, the Korea Disease Control and Prevention Agency reported 451 newly infected people on Monday, the first time the daily tally has fallen below 500 in 41 days, according to The Associated Press.

President Moon Jae-in, during his New Year's address on Monday, said the country will provide coronavirus vaccines free to all in phases, AP reported. Moon said earlier that inoculations will start in February.

USFK reported 42 individuals arriving from the U.S. tested positive for the virus between Dec. 28 and Friday, according to a news release Monday.

Eight service members and one dependent arrived at Osan Air Base on the Patriot Express, a government-chartered passenger air service, on Jan. 2, 4 and 6. Another 29 service members, one civilian and three dependents arrived on commercial flights at Incheon International Airport on Dec. 28, 29 and from Jan. 3-8.

In Japan, Marine Corps Air Station Iwakuni reported 16 new patients: two Monday and seven each on Saturday and Sunday, bringing the number of infected individuals so far this month to 48. All 16 were quarantined after contact with a previously infected person.

The base imposed a lockdown overnight Thursday and all day Friday to stem the spread and conduct contact tracing.