US Forces Korea orders troops to get flu shots by Dec. 1, says vaccine is safe 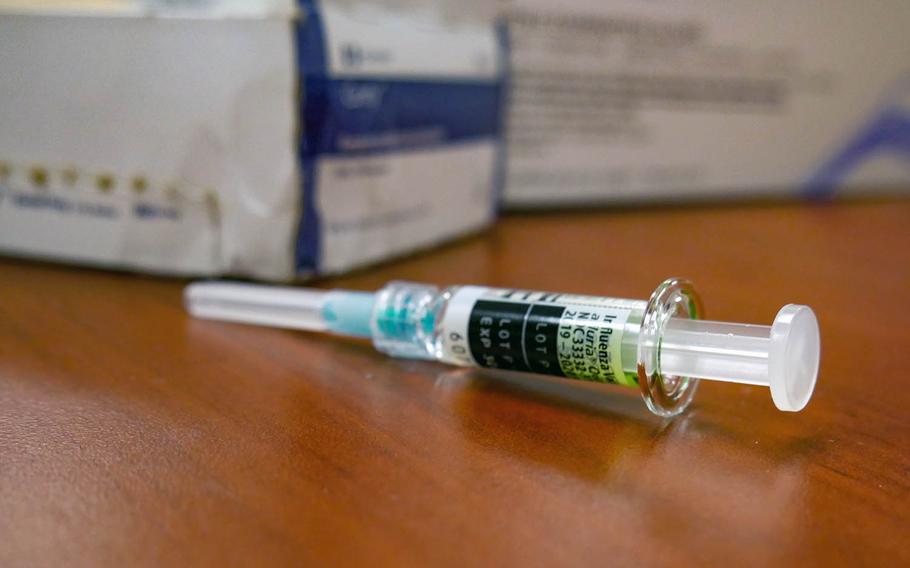 A flu vaccination shot rests on a table at 184th Sustainment Command headquarters in Monticello, Miss., on Feb. 8, 2020. (Veronica McNabb/U.S.Army)

CAMP HUMPHREYS, South Korea — U.S. Forces Korea ordered troops to get flu shots by Dec. 1, saying Tuesday that the vaccine issued by the Defense Department is safe and inoculation is especially important this year due to the coronavirus pandemic.

Safety concerns rose after 59 South Koreans died and hundreds more reported side effects following their flu shots this year. Health authorities said no direct link between the deaths and the vaccine has been found but they were monitoring the situation. The supply chain for that vaccine is separate from USFK’s.

USFK said the vaccine administered to the military community has been approved by the U.S. Food and Drug Administration and has resulted in “zero reports of serious adverse effects or reactions” across the Defense Department medical system.

The command noted the flu vaccine won’t protect against the coronavirus but said it has been shown to reduce symptoms and the risk of illness, hospitalization and death associated with an influenza infection.

All members of the U.S. military are required to get the flu shot annually.

USFK commander Gen. Robert Abrams laid out deadlines for service members in South Korea to get their flu shots by Dec. 1 and all other beneficiaries over 6-months-old by Dec. 21 or earlier if mandated by education officials.

“The presence of the common cold and flu season are upon us,” Abrams said in a press release.

“And the potential exposure of the COVID-19 virus is something we cannot afford to risk by delaying or avoiding the flu shot,” he added, referring to the respiratory disease caused by the coronavirus. “Do your part to protect the force and get your shot today.”

Most of those who died in South Korea were in their 70s and 80s, according to the Korea Disease Control and Prevention Agency. It cited a comprehensive assessment including autopsies in finding no link between the vaccines and the deaths.

“After reviewing death cases so far, it is not the time to suspend the flu vaccination program since vaccination is crucial this year,” considering the pandemic, the agency’s director Jeong Eun-kyung told reporters last week.

Influenza and COVID-19 are both contagious respiratory illnesses with similar symptoms including fevers, coughs, shortness of breath, runny noses and sore throats.

However, they are caused by different viruses. COVID-19 also seems to spread more easily than the flu and causes more serious illness in some people, according to the Atlanta-based Centers for Disease Control and Prevention. There is also still no vaccine for the coronavirus.