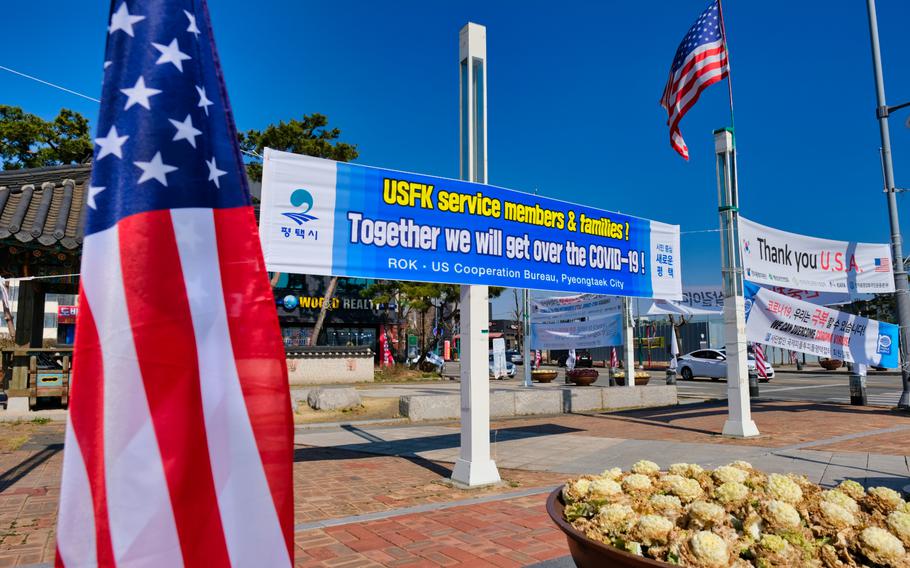 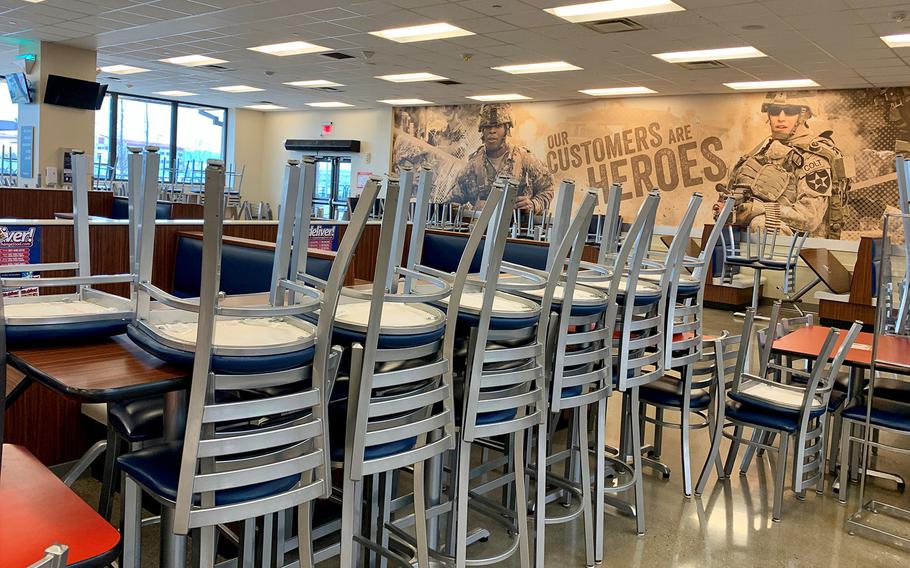 The seating area at the main Camp Humphreys food court and other dining areas were closed off this week after the garrison ordered takeout only at restaurants due to coronavirus fears. (Kim Gamel/Stars and Stripes )

CAMP HUMPHREYS, South Korea — Another person tested positive for coronavirus on the largest U.S. military base in South Korea on Thursday, raising to 11 the total number of cases affiliated with U.S. Forces Korea.

USFK provided no details about the person who was infected or the timeline in its announcement late Thursday, promising more information on Friday.

Only one American soldier has been confirmed to have the virus so far in South Korea. The others were the soldier’s wife, two other active-duty dependents, the widow of a military retiree, an American contractor and four South Korean employees.

Officials were conducting contact tracing to determine if anybody else may have been exposed in the current case. Crews also were activated to clean the areas where the person was known to have been, including the main gym on Camp Humphreys, officials said.

“We have secured all areas that they were on and the clean team is rapidly moving through, conducting a thorough deep clean,” garrison commander Col. Michael Tremblay said in a brief statement on Facebook live.

It was the third infections confirmed at Camp Humphreys, home to USFK headquarters and a population of more than 37,000. The others were at bases in the southeastern city of Daegu and nearby areas, which were at the center of the outbreak that began in mid-February in South Korea.

Garrison officials tightened on-post restrictions earlier this week, including restaurants to serve takeout only, after an American contractor who worked at the Eighth Army headquarters tested positive on Tuesday.

South Korea has seen an overall downtrend in the number of cases nationwide over the past two weeks. Officials warned that infections in people arriving from abroad and cluster outbreaks remain a threat and urged people to stay home and avoid complacency.

The latest figures showed 104 new cases confirmed on Wednesday, raising the total to 9,241 with 131 deaths, the Korea Centers for Disease Control and Prevention said Thursday. That was down from a high of 909 cases logged on Feb 29.