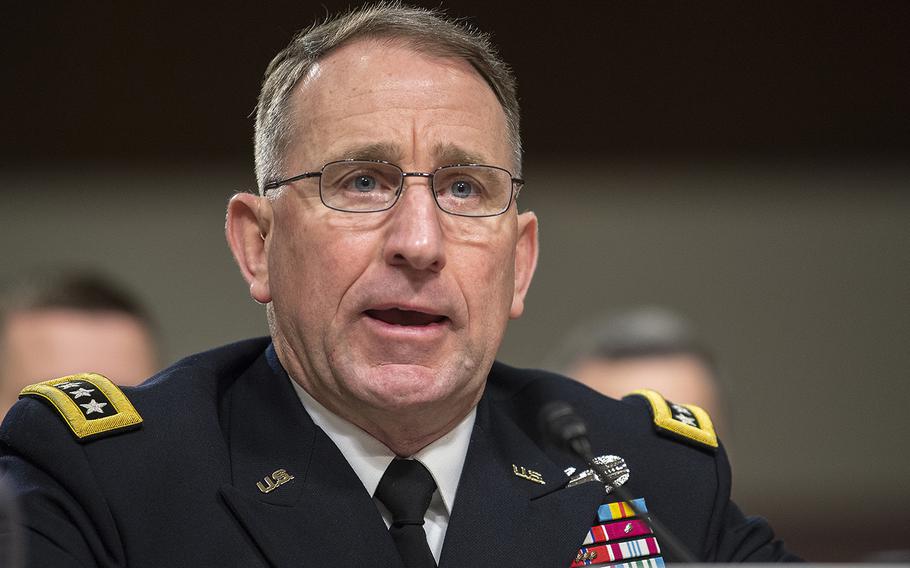 Commander of U.S. Forces Korea Gen. Robert Abrams testifies before the Senate Armed Services Committee on Tuesday, Feb. 12, 2019, during a hearing on Capitol Hill in Washington. (Carlos Bongioanni/Stars and Stripes)

The decision came a day after U.S. Forces Korea reported its 10th coronavirus case in an American contractor who worked at the Eighth Army headquarters on Camp Humphreys. Only one soldier has tested positive.

“In order to ensure I possess the necessary authorities needed to enforce compliance and protect the force, I have declared a Public Health Emergency for all U.S. commands and military installations” in South Korea, Abrams said in a video announcement.

He said the new designation applies to all service members, family members, U.S. and South Korean civilian employees, contractors and Defense Department retirees who have access to U.S. military installations.

Violations will be subject to punishment including barring individuals from installations, he added.

The overall number of confirmed infections in South Korea has been on a downward trend in recent days, but health authorities have warned that the threat remains due to cluster outbreaks and imported cases.

Commanders also have expressed increasing concern about complacency, particularly among civilian employees who cannot be forced to follow the same orders as service members to avoid nonessential travel and off-post social activities.

“Now is not the time to lower our guard. Everyone must do their part to protect the force, stop the spread and kill the virus,” Abrams said.

The public health emergency, which will remain in effect through April 23 unless Abrams decides to change that, “does not change the health protection condition, preventive mitigation measures being taken, or indicate an increased risk level on USFK installations,” USFK said.news@stripes.com