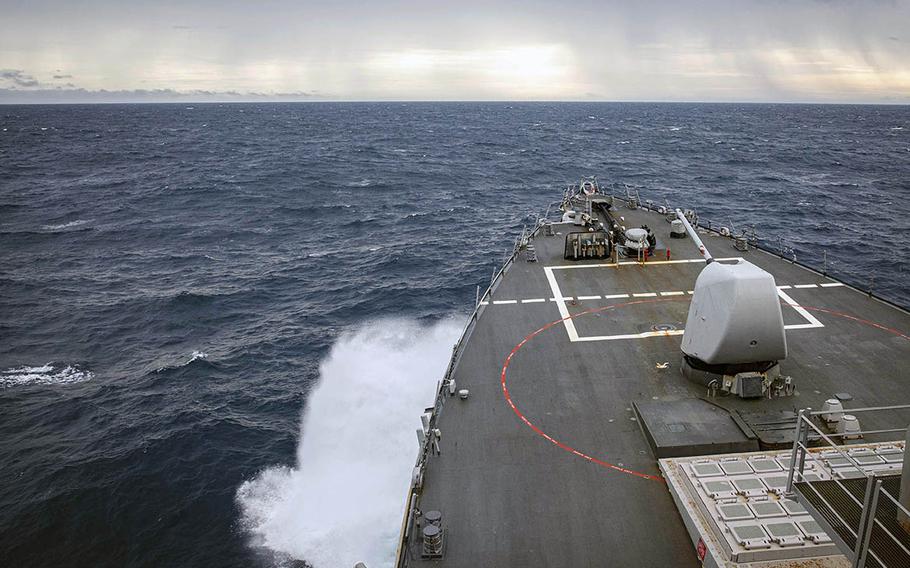 YOKOSUKA NAVAL BASE, Japan — The U.S. Navy guided-missile destroyer USS John S. McCain steamed Tuesday past the Spratly Islands, a disputed chain in the South China Sea west of the Philippines, in another demonstration of freedom of maritime navigation, according to a 7th Fleet spokesman.

Six nations, including the Philippines, China, Vietnam and Taiwan, assert sovereignty over all or part of the chain of more than 100 small, uninhabited islands and reefs rich with fishing grounds and potential oil and gas deposits.

Vietnam, Malaysia, the Philippines and China have created outposts or bases there, according to the CIA World Factbook. China, which claims authority over most of the South China Sea, built bases capable of accommodating fighter jets and other advanced weaponry.

Three nations — China, Vietnam and Taiwan — expect advance notice when Navy vessels intend to pass through the area, according to the Navy statement. The U.S. frequently challenges these claims with freedom-of-navigation operations like the one the McCain conducted Tuesday.

The McCain did not seek permission or give prior warning before passing through the Spratlys to “demonstrate that innocent passage may not be subject to such restrictions,” according to a statement from Lt. Joe Keiley, 7th Fleet spokesman.

“Unlawful and sweeping maritime claims in the South China Sea pose a serious threat to the freedom of the seas, including the freedoms of navigation and overflight, free trade and unimpeded commerce and freedom of economic opportunity for South China Sea littoral nations,” according to the statement.

Tuesday, “all interactions with foreign military forces were consistent with international norms and did not impact the operation,” Keiley said in the statement.

The McCain’s last demonstration in the South China Sea, on Oct. 9, put it near the Paracel Islands, northwest of the Spratlys. During that episode, the McCain was warned away by the Chinese military, according to a report in the state-run Global Times.

Most recently, the McCain steamed Nov. 23 into Peter the Great Bay, off the coast of Vladivostok, Russia, in a challenge to that country’s claims in the area. The Russian Defense Ministry said it expelled the ship from the region, but Keiley at the time called the claim false.

“The United States will never bow in intimidation or be coersced into accepting illegitimate maritime claims, such as those made by the Russian Federation,” he said at the time.