US, British ships train together in Pacific for third consecutive month 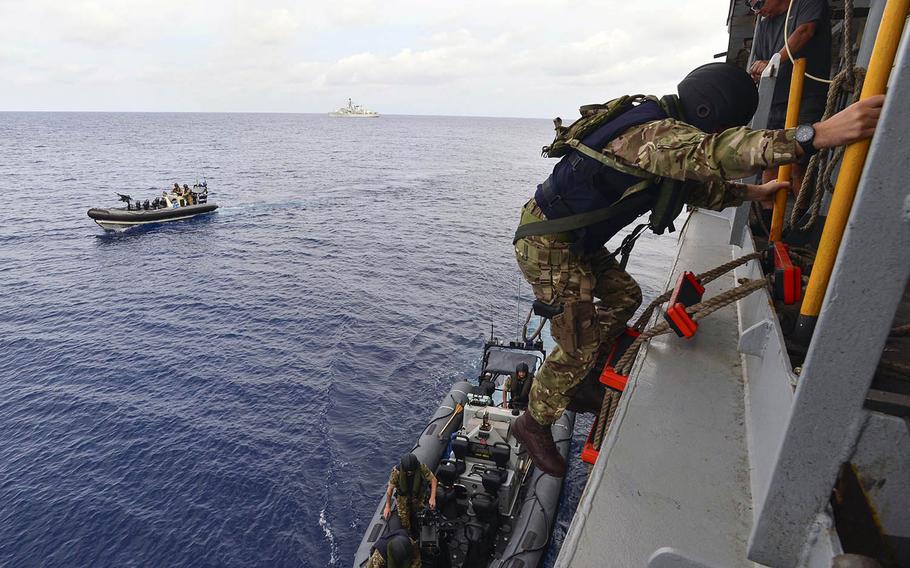 U.S. and British ships drilled this week in the South China Sea, the third joint training since Christmas by the two naval fleets in the Western Pacific, the Navy said.

During a search-and-seizure drill, a boarding team from the Montrose embarked and secured Guadalupe, which posed in the scenario as engaged in illegal trafficking.

The ships also practiced using NATO procedures for replenishment at sea. That protocol ensures that the two vessels could safely and efficiently transfer fuel while underway, the Navy said.

“This was a valuable exercise for us, keeping our integrated Royal Navy and Royal Marines boarding team sharp and ready to deliver any mission assigned to them,” Cmdr. Conor O’Neill of the HMS Montrose said in the statement.

For several days just before Christmas, British and U.S. ships were joined by vessels from the Japan Maritime Self-Defense Force for submarine-hunting drills in the Philippine Sea.

It was the first trilateral exercise of its kind in the 7th Fleet area of operations for the three navies, the Navy said.

Great Britain has stepped up its naval involvement in the South China Sea in the past year, a shift due in part to China’s disputed claims of sovereignty over much of those waters and militarization of islands and coral reefs.

During a security conference in Singapore in June, British Defense Secretary Gavin Williamson told the audience that the nation would begin sending warships through Pacific waters to demonstrate its commitment to internationally recognized maritime rules in the region.

In October, Royal Navy commander Adm. Philip Jones told the Financial Times newspaper that Britain — despite protests by China — would continue to assert its right to freedom of navigation near disputed islands claimed by China. He described the patrols as a means of demonstrating tangible support for allies in the region.

In December, Williamson said Great Britain intended to establish a military base in Southeast Asia.