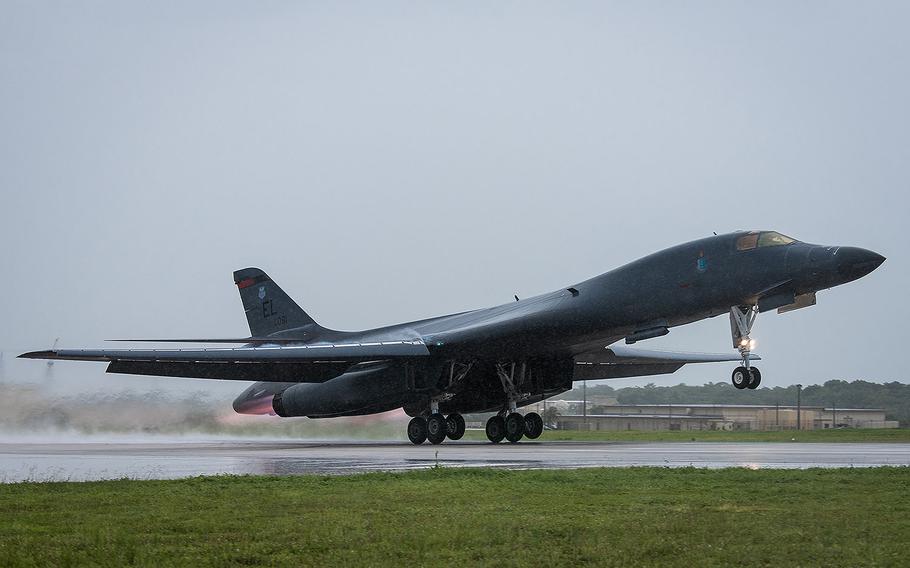 SEOUL, South Korea – U.S. bombers and fighter jets buzzed North Korea’s coast this weekend in a bid to put some military muscle behind recent threats from President Donald Trump amid an intensifying war of words between the two sides.

The Guam-based B-1B Lancers and Okinawa, Japan-based F-15C Eagles flew in international airspace over waters east of the divided peninsula on Saturday, making the northernmost flight for any such aircraft this century, the Defense Department said.

The mission came four days after Trump mocked North Korea’s leader during his U.N. General Assembly address, saying “rocket man is on a suicide mission” and warning he would “totally destroy” the North if forced to defend the United States or its allies.

North Korean leader Kim Jong Un fired back in a rare first-person statement on Friday, calling the U.S. president “mentally deranged” and saying he was seriously considering the “highest level of hard-line countermeasure in history.”

His foreign minister followed up by saying his country may test a hydrogen bomb in the Pacific Ocean, although he didn’t elaborate and said the decision on any counteraction was up to Kim.

“None other than Trump himself is on a suicide mission,” he added.

Trump responded with a tweet: “Just heard Foreign Minister of North Korea speak at U.N. If he echoes thoughts of Little Rocket Man, they won’t be around much longer!”

Behind the bellicose rhetoric are rising fears that the two sides are moving closer to military action as punishing sanctions and diplomatic pressure has failed to stanch the North’s progress toward developing a nuclear-tipped missile that could reach the U.S. mainland.

Underscoring the jitters, a magnitude 3.5 earthquake near North Korea’s main nuclear testing facility on Saturday prompted concern of another test, but South Korean officials and outside experts said it appeared to be a natural tremor. The U.S. military frequently responds to North Korean missile and nuclear tests by sending bombers and other strategic assets to the region in a show of force. But the bombers and jets deployed Saturday flew to the farthest point north of the Demilitarized Zone off the peninsula’s coast than any others this century.

Defense Department spokeswoman Dana White announced the flyover in a statement, saying it underscores “the seriousness with which we take (North Korea’s) reckless behavior.”

“This mission is a demonstration of U.S. resolve and a clear message that the president has many military options to defeat any threat,” she added.

U.S. Pacific Command spokesman Navy Cmdr. Dave Benham declined to discuss flights so far north in previous decades but noted in an email that “the 21st century encompasses the period North Korea has been testing ballistic missiles and nuclear weapons.”

North Koreans, meanwhile, rallied in Pyongyang on Saturday in a show of support for their leader in his standoff with the United States.

Senior officials made speeches lambasting the U.S. while marchers including workers and students carried signs with slogans including “decisive revenge” and “death to the American imperialists,” The Associated Press reported.

On the diplomatic front, the U.S.-led effort to tighten the economic noose on North Korea got a welcome boost from China on Saturday.

Beijing, which is Pyongyang’s only major ally, announced it will limit energy supplies to the North and will stop buying its textiles in accordance with U.N. Security Council sanctions adopted after the isolated state’s sixth nuclear test on Sept. 3.

The Chinese Commerce Ministry said exports of refined petroleum to the North will be limited to 2 million barrels per year, effective Jan. 1, and sales of liquefied natural gas will be banned outright. The restrictions don’t include crude oil, which makes up the biggest share of energy exports to the North.