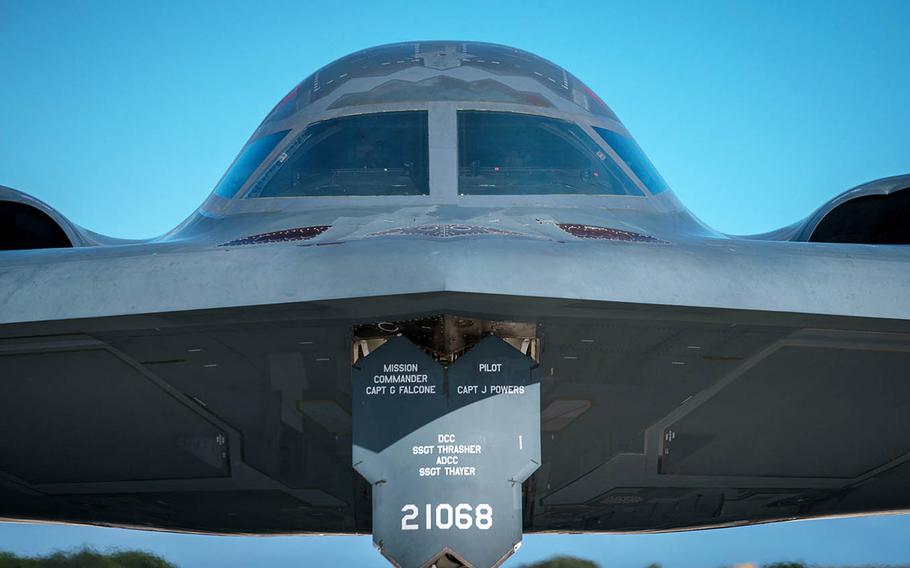 Three B-2 Spirit bombers with about 200 airmen flew last week from Whiteman Air Force Base, Mo., to Andersen Air Force Base on the Pacific island of Guam. (Gerald Willis/U.S. Air Force photo)

Three B-2 Spirit bombers with about 200 airmen flew last week from Whiteman Air Force Base, Mo., to Andersen Air Force Base on the Pacific island of Guam. (Gerald Willis/U.S. Air Force photo) 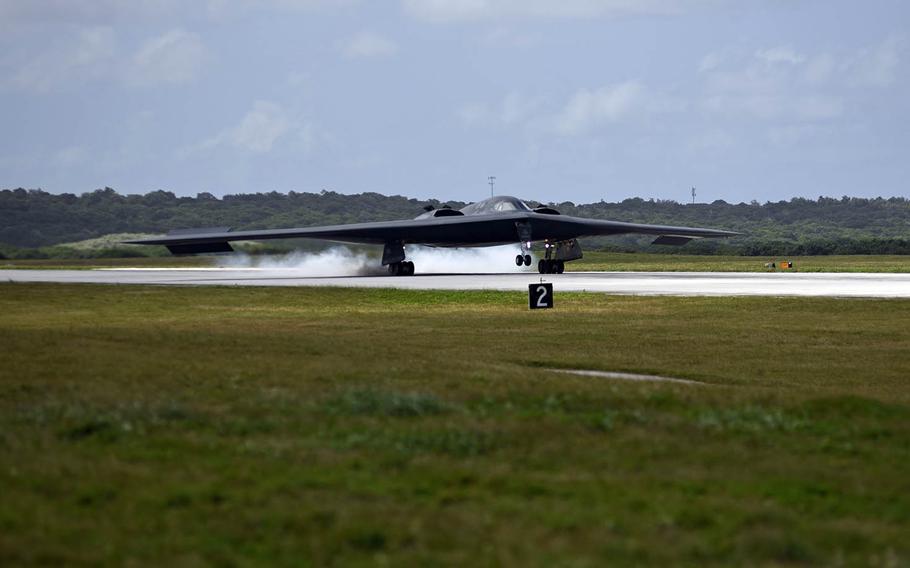 SEOUL, South Korea — While North and South Korea take steps toward détente, the U.S. military has sent nuclear-capable stealth bombers and warships to the region ahead of next month’s Olympics.

The deployments send a clear signal that Washington isn’t letting down its guard despite an agreement to postpone U.S.-South Korean military exercises on the divided peninsula until after the Winter Games.

The two Koreas began their first formal negotiations in more than two years last week, leading to an agreement for the North to participate in the Olympics, which begin on Feb. 9 in the South Korean resort town of Pyeongchang.

Another round of talks is scheduled for Wednesday in the heavily fortified border area that divides the countries. But experts caution the process can’t make significant progress in ending the crisis over North Korea’s nuclear weapons program until the United States becomes involved.

President Donald Trump has welcomed the talks and tamped down his bellicose rhetoric. But the military moves and continued North Korean threats against the U.S. are a stark reminder of the fragility of efforts to ease tensions that have raised fears of a new conflict on the divided peninsula.

The three B-2 Spirits with about 200 airmen flew last week from Whiteman Air Force Base, Mo., to Andersen Air Force Base on the Pacific island of Guam.

Meanwhile, the USS Carl Vinson aircraft carrier along with its strike group of guided-missile destroyers and cruisers is en route to the Western Pacific. And the amphibious-assault ship USS Wasp pulled into its new homeport in Japan Sunday after receiving upgrades allowing it to launch the next-generation F-35B stealth fighters.

The bombers in particular are likely to infuriate the North Koreans who believe the presence of U.S. strategic assets and military exercises are preparations for an invasion.

That takes on added weight following President Donald Trump’s threat to “totally destroy” North Korea if needed to defend the U.S. and its allies as well as recent reports that the military is considering a pre-emptive strike and preparing for war.

The B-2s, unlike the B-1B Lancers that have made several sorties to the Korean Peninsula in recent months, are the most advanced U.S. bombers and can carry nuclear weapons. They can also carry a 30,000-pound GBU-57 Massive Ordnance Penetrator, which would be able to target North Korea’s extensive network of reinforced tunnels.

U.S. officials stressed the deployments are part of preplanned rotations and training while acknowledging they also serve as a message not only to North Korea but also to its main ally China.

“You would be wrong to view the bomber deployment within the single lens of what it means to the Korean Peninsula. It affects allies across the Pacific,” the Pentagon’s joint staff director Lt. Gen. Kenneth McKenzie Jr. told reporters on Thursday.

“I think, when we move bombers across the globe, we send a signal to everyone,” he said when asked specifically about Beijing.

The New York Times also reported that the Pentagon plans to send more special operations troops to the peninsula beginning with the Olympics, although it was unclear what their role would be.

South Korea’s defense ministry played down the report, saying it was working closely with the U.S. to ensure the games are secure. “Particularly we’ve been taking steps in relation to the threat of possible terror attacks that could happen,” ministry spokeswoman Choi Hyun-soo said during a press briefing.

North Korea has insisted its nuclear weapons program is not on the table and the talks with the South have so far focused only on the Olympics and the resumption of efforts to ease hostilities in the heavily fortified border area.

The communist state has demonstrated rapid progress in its effort to develop a nuclear weapon that could target the U.S. mainland. It has test-fired three intercontinental ballistic missiles and conducted six underground nuclear tests, including three since January 2016.

A leading delegate to the talks said last week that the North’s nuclear weapons were aimed at the U.S., not South Korea.

North Korea’s state-run news agency said such talk chilled the atmosphere for North-South reconciliation and warned it could still withdraw from plans to join the Olympics.

“They should know that the train and bus carrying our delegation to the Olympics are still in Pyongyang,” the Korean Central News Agency reported Sunday. “The South Korean authorities had better ponder over what unfavorable results may be entailed by their impolite behavior.”

North Korean media also have called on the South to end annual joint war games with the U.S. that the allies insist are defensive in nature and necessary to maintain readiness. Washington and Seoul have not announced a new start date for the springtime drills codenamed Key Resolve and Foal Eagle, but they’re expected to begin shortly after the Olympics and subsequent Paralympics end on March 18.